The global metallic stearate market size was valued at USD 3.33 billion in 2018 and is expected to expand at a CAGR of 5.5% from 2019 to 2025. Rising global plastics and rubber industry along with increasing demand in cosmetics and pharmaceutical applications is anticipated to drive the growth. A wide range of products, including aluminum, zinc, and calcium stearate, are used as metallic stearates in a variety of applications, such as plastics, rubber, pharmaceuticals, and cosmetics among others.

The rapid growth of the plastics industry along with growing product demand for refining surface textures of plastic goods are expected to propel the market over the forecast years. Furthermore, augmented use in the rubber industry as mold release agents is also likely to further drive the demand for metallic stearates. 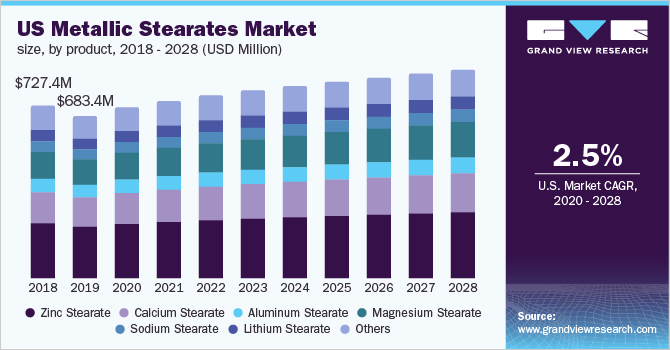 Manufacturers are focused on R&D activities and advanced production technologies. Precipitation or double decomposition is the most commonly used method for producing metallic stearates. In this process, the rate of precipitation controls the particle size, surface area, and particle morphology. The method produces fine particles of metallic stearates with a high surface area. They can be used as lubricants and release agents. The direct reaction process involves the reaction between stearic acid and metal oxide at high temperature. Various technologies, such as X-ray diffraction, SEM microscopy, and IR spectra are used to monitor the surface properties of metallic stearates.

U.S. was the primary producer in the NAFTA region. China, Germany, U.S., Italy, Japan, France, and South Korea were the key exporter of plastics and plastics-based products. Significant plastics importing countries in terms of the volume include the U.S., Mexico, Germany, France, U.K., Netherlands, and Japan.

Zinc led the global metallic stearate market in 2018. It is insoluble in polar solvents such as ether and alcohol but soluble in chlorinated hydrocarbons and aromatic hydrocarbons. Since zinc stearate does not contain an electrolyte and has a hydrophobic agent, it is considered as the most potent mold release agent. They are used as release agents and lubricants in rubber and plastic industries.

Calcium stearate is a white waxy powder and is classified as a calcium soap. It is insoluble in most solvents and dissolves slightly when heated in chlorinated hydrocarbons, aromatic compounds, or mineral and vegetable oils and waxes. Calcium stearate is mainly used as a mold release agent, lubricant, and acid scavenger in the plastics industry. The construction industry uses it as a hydrophobic agent for the preservation of building and construction materials and preventing moisture absorption. The cosmetics and pharmaceutical industry use it as an anti-caking additive for granules and powders.

Aluminum stearates are widely used to manufacture aluminum greases. These types of greases are highly hydrophobic and are characterized by transparency and good adhesion to metallic surfaces. Due to aluminum stearates being excellent water repellents, they are used in paint and coatings and building industry materials as water repellent ingredients. Aluminum mono-, di-, and tri-stearates are insoluble in water, esters, lower alcohols, and ketones. Major players such as Peter Greven GmbH & Co. KG., Baerlocher GmbH., Valtris Specialty Chemicals., and Norac Additives manufacture aluminum stearates for use in the building and construction and cosmetic industry.

Plastics emerged as the largest application segment in terms of volume as well as revenue in 2018. Metallic stearates are used mainly as lubricants, acid scavengers, and release agents by the plastics industry. It also plays a vital role in the melting process. Its usage allows the producers to optimized production by producing articles with smoother surfaces and less friction.

Rubber emerged as the second-largest application segment. Metallic stearates provide properties that ideally make them rubber release agents. Transfer molding, compression molding, and extrusions are some of the processes that use the product. Major players in the market including Goodyear Tire & Rubber Company and Bridgestone use rubber tires that use metallic stearates during production. 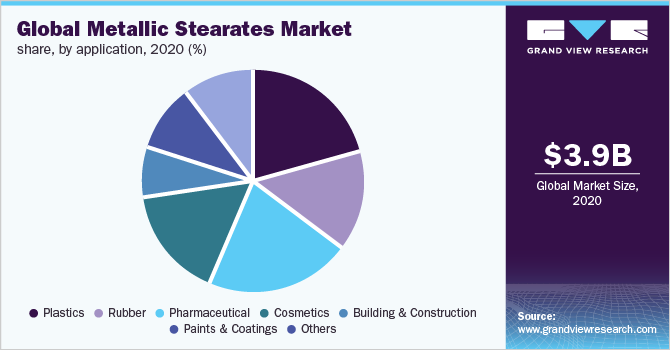 In cosmetics and personal care products, metallic stearates are used mainly in the formulation of makeup products such as eyeshadow, eyeliner, lipsticks, mascara, face powders, blushers, and foundations. They are also used in deodorants, fragrances, and hair and skincare products. Additionally, the product is used in shampoos, sun-protective lotions, medicated ointments, and foot and body powders among others.

Asia Pacific emerged as the largest regional market in 2018. Robust economic growth in India, China, and Southeast Asian countries in the past couple of years bolstered demand in numerous applications of the product. Increased construction activities and automotive production have propelled the product demand in paints and coatings, rubber, and plastics.

North America emerged as the second-largest regional market. High demand from cosmetic and pharmaceutical industries has fueled the product demand from countries including the U.S. and Canada. Increasing R&D activities in the field of metallic stearates for the development of efficient products for use in commercial sectors is projected to fuel the regional product demand in the forthcoming years.

Product differentiation and expansions positively influence the key players. Manufacturers focus on developing products with improved surface properties. Incorporation of stearic acid based on vegetable oil is one of the key focus of manufacturers for the production process.

This report forecasts revenue growth at global, regional, and country level and provides an analysis of the latest industry trends in each of the sub-segments from 2014 to 2025. For the purpose of this study, Grand View Research has segmented the global metallic stearate market report on the basis of product, application, and region.