The global metamaterial market size was estimated at USD 316.0 million in 2016. Increasing need for advanced materials that can be used in place of conventional materials in key applications such as antenna, radomes, and absorbers is expected to be a key factor driving the global market growth over the forecast period.

Metamaterials refer to specially engineered composite materials with superior electromagnetic properties, in comparison with traditional composites found in nature. These products find significant application scope in major end-use verticals, such as medical, aerospace and defense, consumer electronics, and automotive. The industry is mainly driven by the demand from telecommunication applications, owing to the ability to be used in key products such as antennas and radars.

The U.S. metamaterials industry is anticipated to grow at a CAGR of nearly 18% from 2017 to 2025. The increasing research being conducted in the field has helped in increasing the application scope of the product in recent years. The demand for antennas and radars in various end-use applications, such as defense, electronics, and automotive, has been growing steadily over the past few years and is expected to drive the overall industry growth during the forecast period, most notably in key markets such as China and India.

The product has different applications, including antenna, absorber, superlens, cloaking devices, and sensors. The use of metamaterials for the manufacturing of the products is increasing on account of its properties including its ability to manipulate electromagnetic waves. However, there is still research being conducted to help increase the scope of the product so that it can further be used in a variety of applications. The product is now widely being used in the medical and consumer electronics sector and thus is expected to witness a significant increase in demand over the forecast period.

The demand for antennas and radars is increasing due to the increasing safety requirements in the defense sector. These radars help in detecting any obstacles and help during activities conducted in low visibility conditions. These factors together are expected to fuel the demand for antennas and radars, which in turn is supposed to propel the product demand over the forecast period.

However, regulations hindered the usage of metamaterials in various application segments. The National Archives and Records Administration describes several conditions that control the use of metamaterial surface scattering antennas.

Electromagnetic metamaterials emerged as the leading product category and accounted for over 28% of the total revenues in 2016. The rising research being conducted in the metamaterial field and its increasing use in the emerging regions of Asia Pacific and the Middle East & Africa is anticipated to be a key driving factor for the growth of the industry during the forecast period.

Electromagnetic metamaterials are made up of structures, which have specially engineered properties for applications in optical and microwave applications, including electromagnetic invisibility cloaks, microwave couplers, and beam steerers. Due to these properties exhibited by this product type, there is an increasingly widening scope in several end-use verticals. The products are incorporated in the manufacturing of antennas, radomes, microwave couplers, band-pass filters, lenses, and beam steerers. The growing use of this product type in various applications is expected to drive the overall industry growth over the coming years

The terahertz product segment is expected to be the highest growing segment, projected to grow at a CAGR of nearly 19% during the forecast period. These products are specially engineered to interact at terahertz frequencies. These frequencies exist between microwave and infrared wavelengths, ranging from 0.1 to 10 THz. Devices that contain terahertz metamaterials are used for remote sensing and in spectroscopy.

Photonic metamaterials are gaining importance due to the increasing use in manufacturing of cloaking devices and transformation optics. A few photonic metamaterials exhibit magnetism at very high frequencies, which results in strong magnetic coupling. In terms of revenue, this product segment is expected to grow at a CAGR of 17% from 2017 to 2025.

The antenna segment was the largest application segment in the overall industry, accounting for 42% of the total revenues in 2016. The increasing use in antennas and radars has led to increasing efficiency of these final products, mainly on account of the superior properties offered by metamaterials.

The absorber segment accounted for a share of 31% of the overall revenues in 2016. The products are being used for manufacturing of products such as radars, cloaking devices, and super lenses. The antenna and absorber segments are expected to be among the higher revenue-generating segments, owing to the increasing awareness regarding the physical properties and benefits of using metamaterials.

The aerospace & defense segment emerged as the leading end-use segment in the industry, accounting for 32% of the overall revenues in 2016. Increasing need for antennas and radars in the defense and military sectors and for commercial purposes is expected to drive the market growth during the forecast period. Thin and efficient antennas, built using metamaterials, can be fit into small spaces and perform better than conventional antennas.

In addition, metamaterials are also being used in the medical industry in sensors and imaging devices on account of its various properties, such as ability to manipulate electromagnetic waves and provide better images required for the detection of certain diseases. The medical equipment industry is a diverse market, which is expected to experience robust growth due to growing population and increasing health hazards globally, most notably in China, India, and Japan.

North America dominated the overall industry in terms of revenues, in 2016, and this trend is expected to continue over the forecast period. The regional segment is projected to witness growth at a CAGR of nearly 18% from 2017 to 2025. The increasing demand for the products from various end-use sectors, including aerospace & defense, is expected to propel the regional market growth over the forecast period. 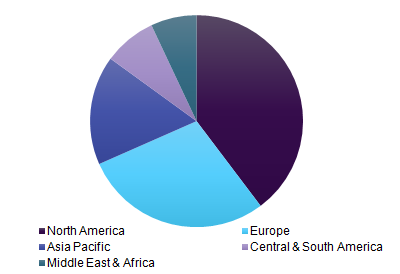 The key players in the global metamaterials industry include Metamaterial Technologies Inc., JEM Engineering, Kymeta Corporation, Echodyne, Applied EM, Harris Corporation, Phoebus Optoelectronics, and Newport Corporation. The companies are emphasizing on new product development, partnerships, and acquisitions with key players to increase the share and strengthen their competitive positions in the industry.

This report forecasts revenue and volume growth at global, regional & country levels and provides an analysis on the industry trends in each of the sub-segments from 2014 to 2025. For the purpose of this study, Grand View Research has segmented the global metamaterial market on the basis of product, application, end use, and region: