The global methionine market size was valued at USD 3.54 billion in 2014. Increasing meat consumption, particularly in Asia Pacific and Latin America, is expected to remain a key driving factor for the market. Increasing population in these regions has contributed to the growth of the global meat industry.

Rising meat consumption as a source of protein around the world is expected to be a key factor driving product demand. Countries such as China and India have been witnessing high meat consumption rate on account of changing food habits, emergence of frozen meat and meat products, and establishment of meat outlets. This is expected to spur demand for animal feed additives. 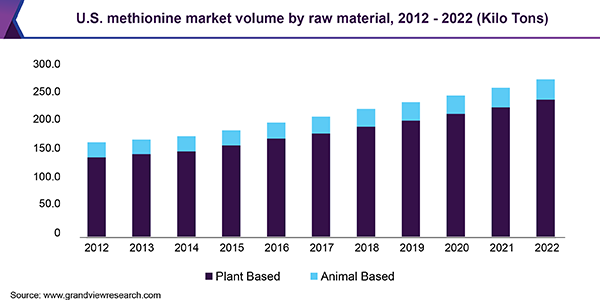 Recent animal disease outbreaks have also prompted livestock manufacturers to include animal feed additives such as methionine in their feed to improve its nutritional value. Growing consumer awareness regarding the health of livestock has also contributed to increasing product usage.

Methionine is widely used in dietary supplements. Rising demand for dietary supplements among consumers, supported by growing interest in leading a healthy lifestyle, avoiding healthcare costs, and increasing geriatric population, is anticipated to drive product demand over the next few years. Increasing obesity prevalence among the younger generation in countries such as U.S., U.K., and Canada are projected to fuel the dietary supplements market.

Increasing application scope in the pharmaceutical and medical sectors is expected to further fuel market growth over the forecast period. It is widely used as a raw material in pharmaceutical applications and as an intermediate in vitamin and liver-related medicine manufacturing.

Methionine prices have witnessed a considerable surge owing to unavailability of raw material over the recent past. Short-term factors such as increasing energy prices is another hurdle leading to shortage of raw material for production. Increasing demand from the cosmetics industry is anticipated to provide lucrative opportunities for industry participants over the forecast period.

Plant-based raw material formed the largest segment with a market valuation of over USD 3.0 billion in 2014. Wheat, soymeal, and seaweed are some of the key raw materials involved in the production of methionine. Increasing consumer preference for bio-based products, owing to growing environmental concerns and rising awareness about the same, is anticipated to drive the market over the course of the forecast period.

Based on several research activities conducted on methionine and the impact of its intake among humans, researchers have established that vegetarian food sources provide comparatively higher ratios of methionine in blood concentrations as compared to a non-vegetarian diet.

Animal-based methionine accounted for over 10.0% of the total market in 2014 and the segment is likely to expand at an estimated CAGR of more than 4.0% from 2015 to 2022. Stringent government regulations prohibiting bone meal and fish meal usage for developing amino acids is anticipated to challenge industry participants.

Animal feed was the largest application segment in the methionine market and accounted for over 90.0% of the total volume in 2014. Growing demand for animal feed additives owing to rising need to maintain metabolism rate in livestock as well as increasing meat consumption is anticipated to drive the market over the coming years.

The food and dietary supplements segment was valued over USD 200.0 million in 2014. Rising health awareness among consumers, coupled with increasing per capita disposable income in developing regions such as Asia Pacific and Latin America, is anticipated to fuel product demand. Increasing demand for energy drinks, particularly in U.S. and U.K. is further anticipated to compliment segment growth.

The pharmaceuticals segment is anticipated to grow at a considerable rate over the forecast period. Improving health standards and stricter healthcare regulations are projected to fuel demand for methionine in pharmaceutical applications.

Asia Pacific led the global market with a valuation of over USD 1.0 billion in 2014. This region is expected to witness significant growth due to increasing meat consumption in China, India, Vietnam, and the Philippines. Rising per capita disposable income, coupled with changing food habits, is anticipated to drive product demand over the coming years. 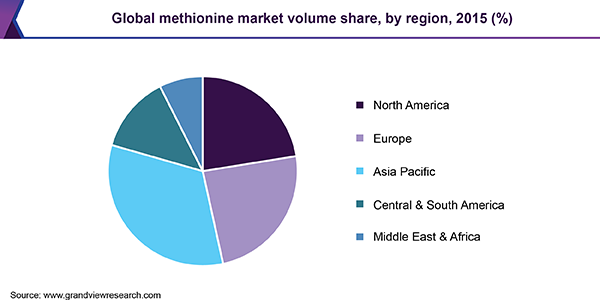 Europe accounted for over 20.0% of the total demand in 2014, with U.K. and Germany expected to emerge as leading contributors. Increasing demand for dietary supplements and growing geriatric population in the region are anticipated to remain key factors driving the regional market.

North America is anticipated to register an estimated CAGR of 5.8% from 2015 to 2022. Increasing prevalence of obesity and cardiovascular diseases (CVD) among the population is expected to fuel demand for dietary supplements in the region. The market in Central and South America will be fuelled by increasing livestock production and a growing pharmaceutical industry.

The marketformethionine in advanced economies such as U.S., Germany, Canada, and U.K. is propelled by surging dependency on animal-based diet. People in these countries prefer high-protein diet and largely rely on non-vegetarian food sources rather than plant-based food products. This has led to increasing consumption of methionine in regions such as Europe and North America.

The global market is highly concentrated in nature and is led by large multinational corporations. This trend is expected to continue over the next few years. Key participants operating in this market include Adisseo France SAS; Novus International, Inc.; Evonik Industries AG; and Sumitomo Chemical Company.

How big is the methionine market?

What is the methionine market growth?

Which segment accounted for the largest methionine market share?

b. Asia Pacific dominated the methionine market with a share of 32.5% in 2019. This is attributable to rising healthcare awareness coupled with cloud-based technologies acceptance and constant research and development initiatives.

Who are the key players in methionine market?

What are the factors driving the methionine market?

b. Key factors that are driving the market growth include rising population coupled with increasing meat consumption, particularly in Asia Pacific & Latin America.