The global microfluidics market size was valued at USD 3.6 billion in 2018 and is expected to expand at a CAGR of 18.07% over the forecast period. The market is expected to grow owing to the increasing demand of the Point-of-Care (POC) market. Microfluidics devices require a fraction of the sample to interpret the data. The application has allowed the conventional laboratory procedure to be shifted to lab-on-chip.

The potential of this technology has attracted both industry and academia to introduce newer techniques of sample identification and technologies that can bring down mechanical errors. According to the Florida Atlantic University, inspired by the pregnancy test, the scientists have developed a new method to store the microfluidic devices without refrigeration for months enabling developing nations to adopt a reliable and inexpensive way to treat patients. 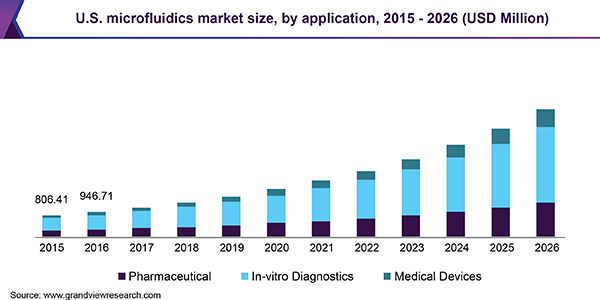 Paper diagnostic tests are expected to save thousands of lives in near future. Whitesides (Harvard University chemist) and Yager (biochemist at the University of Washington) are in a process of figuring out an app for paper microfluidics: nucleic acid testing with the grants from the Defense Advanced Research Projects Agency (DARPA). It would enable the medical practitioner to identify and diagnose the number of chronic diseases and infections by detecting pathogen DNA or gene sequences.

Technological advancement is one of the key drivers of the microfluidics market. In February 2017, a team of scientists at Stanford University School of Medicine developed an economical lab on chip device electronics, microfluidics, and inkjet technology. It is a two-part system including microfluidic chamber for cells, an electronic strip, and an inkjet printer. It is capable of counting cells, isolate cells and also capturing single cell form a mixture. This device is anticipated to have applications in diagnostics.

The potential of this technology is attracting numerous players to expand their market share through collaborations. Collaborations with other market experts enable development of strong product portfolios and newer and improved versions of microfluidic devices/technology. For instance, In July 2015, CEA Tech-Leti announced to continue its collaboration with Illumina, Inc. Through this collaboration, both Tech-Leti and Illumina would work on next-generation digital microfluidics technology.

In Vitro Diagnostic (IVD) held the largest market share in terms of revenue in 2018 due to extensive application of the technology such as the POC. Moreover, companies such as Abbott, Roche Diagnostics, Cepheid, and Becton, Dickinson and Company (BD), are adopting microfluidics in the IVD. Abbott’s i-STAT and Samsung LabGeoPT10 are the examples of single-step assays that enable blood glucose testing with a single drop of blood.

Medical device segment is expected to witness the fastest growth over the forecast period, attributed to the automation offered by microfluidic devices, which is the most desired attribute in any medical device. Automation saves time, ensure quality, and reduces the risk of errors. These properties are important in point of care diagnostics of treatable infections. Urgent need for diagnostic devices to make point-of-care more efficient is anticipated to further drive the growth.

Researchers are trying out new techniques that can offer better platforms for next-generation sequencing. In November 2018, The University of Illinois at Chicago has received a five-year grant of USD 500,000, from the National Science Foundation to support the Center for Advanced Design and Manufacturing of Integrated Microfluidics (CADMIM) for developing microfluidics-based solutions.

In July 2016, Metagenomics received a European grant of USD 11.51 million for its next-generation screening platform. Researchers at the University of Twente, Netherlands are working on the development of microfluidics devices majorly related to assist reproductive technologies. With this, it is expected that after fertilization, embryos are able to be introduced in the mothers’ uterus with the help of reservoirs and microfluidic channels.

Rising application in clinical research is expanding with advanced technologies, such as the introduction of digital microfluidics. In November 2017, Dolomite introduced its new droplet-based microfluidics platform named Nadia single cell platform for single cell research In July 2016, the Massachusetts Institute of Technology designed a microfluidics device that tests the effect of electric field on cancer cells. The researchers concluded that range of middle-frequency and low-intensity electric field stopped the cancer cells from growing without affecting the neighboring cells.

Polymer-based microfluidics led the material segment in 2018. Polydimethylsiloxane (PDMS) is the most widely material used for fabrication and prototyping in the academic community. The polymer is economical and robust for exploratory research, but with advanced technology, PDMS has been replaced by an alternative that has better elasticity and pressure resistance.

The glass material is majorly used for manufacturing analytical devices. Researchers are developing newer techniques to carry out mass fabrication of glass microchips. In November 2014, an article was published in the Royal Society of Chemistry. The researchers developed a new method for fabricating glass microchips using Dry Film Photoresists (DFR). Wet etching of glass with DFR is a one-step process offering a more economical option as compared to conventional fabrication.

Silicon is expected to expand at the fastest CAGR during the forecast period, due to expanding POC diagnostics applications of the material. In July 2016, researchers from the Tufts University in Medford designed a microfluidics device by combining silk and gel solution into a mold. The scaffold was a 3D network of microchannel with rectangular silk hydrogels. The silk gel tolerates different environmental variations such as pH, salinity, and temperature.

North America was the largest segment in the market due to the presence of prominent market leaders, introduction of advanced technologies, large number of studies to improve the sample volume optimization techniques, and the strong growth of POC diagnostics market.

Moreover, strong financial backing by organizations is expected to pour in new POC diagnostics for chronic diseases, such as cancer and stroke. For instance, in July 2016, New Jersey Institute of Technology received a research grant of USD 1 million from the W.M. Keck Foundation to develop a microfluidic device. The 3-year project will also develop new fabrication materials such as topological phononic crystals, which have wide array of applications. In April 2016, researchers from MIT received USD 300,000 from the Koch Institute for Integrative Cancer Research. The grant would be used to develop IllumiRNA platform. This microfluidics device sorts cell population into a droplet of blood. 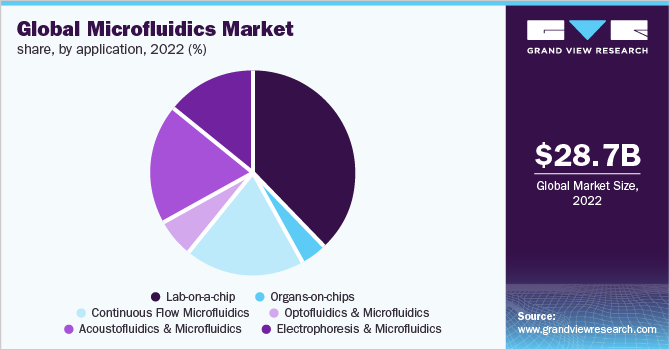 Asia Pacific is the fastest growing market owing to the developing economy, research infrastructure, and low-cost labor. International players are trying to penetrate the untapped market by introducing their products in the APAC market. In October 2015, Dolomite along with the Chemical and Biological Microsystems Society organized a competition in Korea where the winner received Dolomite equipment of USD 2,500. In February 2016, Samsung Electronics introduced a wearable lab-on-chip device as a data monitoring and processing device for laboratory test biomarkers. The bioprocessor chip is an integrated device that performs all-in-one tests.

Companies are introducing new products to strengthen their market position. Recently, in March 2019, Dolomite Microfluidics shared the news of its upcoming microencapsulation systems. µEncapsulator Systems. The system’s capacity is to encapsulate 300,000 cells into monodisperse microfluidic droplets within 15 minutes. The device is expected to be highly beneficial for the research biologists. In February 2015, Illumina, Inc. launched NeoPrep, an automatic DNA and RNA sample preparation platform. Through the NeoPrep microfluidics cartridge, 16 samples are prepared at a time. Innovation and R&D by the market players are expected to further propel the growth.

This report forecasts revenue growth at global, regional, and country levels and provides an analysis of the latest industry trends in each of the sub-segments from 2015 to 2026. For this study, Grand View Research has segmented the global microfluidics market report based on application, material, and region: