Oil-based fluids (OBF), toxic, and cuttings from drilling mud must be disposed at approved onshore locations. There are various environmental regulations in the Middle East that have to be followed by oil & gas exploration & production (E&P) companies in onshore and offshore locations. These regulations are established to monitor E&P operations and minimize the impact on the environment. 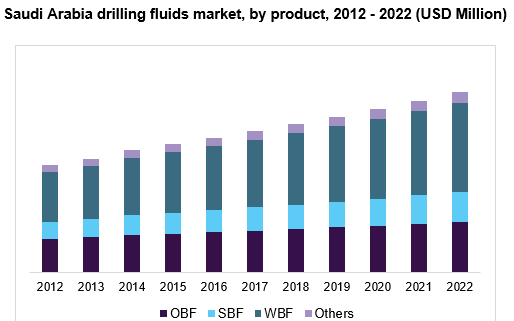 Growing safety, environmental and health concerns regarding disposal of cuttings and mud discharge are anticipated to hinder market growth over the forecast period. Growing environmental concerns regarding harmful effects of using OBF are leading to increasing adoption of water-based fluid (WBF). Owing to its biodegradability characteristics, synthetic based drilling fluid (SBF) is expected to gain significance over the forecast period.

Large number of ongoing operations in major oilfields such as Ghawar, Safaniya, Khurais, and Shaybah are expected to play key role for oil & gas industry growth in the region. Growing demand for air conditioning and other industrial cooling equipment is expected to drive electricity demand in the region. Growing concern towards collapsing boreholes, spill containment and handling solid wastes is expected to drive drilling fluid demand over the forecast period in Saudi Arabia.

Drilling fluid serves various functions including removing cuttings from the wellbore, controlling formation pressures, lubricating and cooling the drill bit, and maintaining wellbore stability. WBF was the largest product segment accounting for over 46% of market revenue share in 2014. Rising focus on improving the inhibitive and thermal performance of water-based systems to compete with non-aqueous used in the challenging and harsh environment is anticipated to drive product demand over the next seven years.Moreover WBF are cost-effectiveness and have lower environmental impacts of the discharged cuttings and mud.

Owing to its low toxicity, low bioaccumulation potential, and lower fluid loss than other product segments, SBF is expected to gain significance over the forecast period. Growing concern towards downhole losses and maintenance costs in deepwater projects has urged oil & gas companies to move towards efficient drilling fluids that also adhere to environmental regulations..

Drilling fluid lubricates industrial equipment and reduces corrosion in reactive formations. Increasing oil E&P activities to fulfill growing energy needs is anticipated to drive product demand over the forecast period. Onshore application segment was the largest application segment of the market, accounting for over 70% of market share in 2014. Growing demand for crude oil and natural gas in Saudi Arabia, UAE, and neighboring countries in Asia Pacific and Europe are expected to drive onshore projects over the long term. 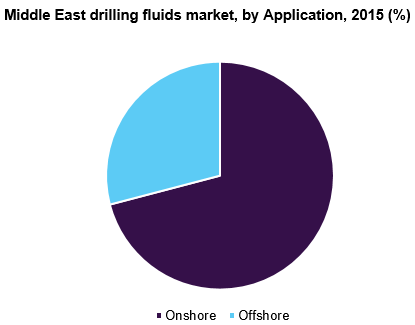 Moreover growing demand for increasing production rates, efficiency and mitigating gas related capital expenditures is expected to drive drilling fluids demand in offshore activity, over the long term. Growing number of ongoing projects in the Middle East and Africa including, Maydan Mahzam and Bul Hanine fields are expected to drive product demand over the forecast period.

Saudi Arabia is the largest regional market in the Middle East, owing to increasing demand for transportation fuels and power generation sectors. A Large number of ongoing operations in major oilfields such as Ghawar, Safaniya, Khurais, and Shaybah are expected to play a key role in oil & gas industry growth in the region. Rising number of rig counts in the region coupled with growing number of deepwater discoveries in the Persian Gulf and the Red Sea is anticipated to drive product market over the forecast period.

Qatar is anticipated to witness the highest growth in this market over the forecast period. Ongoing developments in oil & gas industry such as new contracts and investments to sustain annual production levels is expected to drive oil & gas E&P activity in the region over the next seven years. Moreover Qatar has witnessed large scale projects in natural gas development and exports for downstream industries that utilize it as a feedstock. Presence of megaprojects including Total, Shell, ExxonMobil, and ConocoPhillips is expected to drive LNG sector in the region. Deploying advanced techniques such as enhanced oil recovery (EOR) for oil exploration activity in fields including Al-Shaheen, Bu Hanine, Dukhan and Idd al-Shargi is expected to drive the market in coming years

Major companies operating in the Middle East drilling fluid market include Baker Hughes, Halliburton, Schlumberger, and Weatherford. These companies are involved in manufacturing and utilizing the products in their E&P activities worldwide. Companies such as Newpark Resources, Anchor Drilling fluid, Catalyst LLC, Petrochem Performance Chemicals, EMEC and Diamoco Group are integrated companies and are involved in the raw material production and manufacturing & distribution.

This report forecasts revenue and revenue growth at regional (Middle East) & country levels and provides an analysis on the industry trends in each of the sub-segments from 2012 to 2022. For this study, Grand View Research has segmented the Middle East drilling fluids market on the basis of product, and application.