The boiler water treatment segment emerged as the dominant segment in Turkey in 2018. The segment accounted for the largest market share of 34.1% by revenue during the year. Boiler water treatment can be considered as an effective process to obtain water for steam generation. Chemicals used in the method help in removing undesired organic material, dissolved solids, and suspended solids. 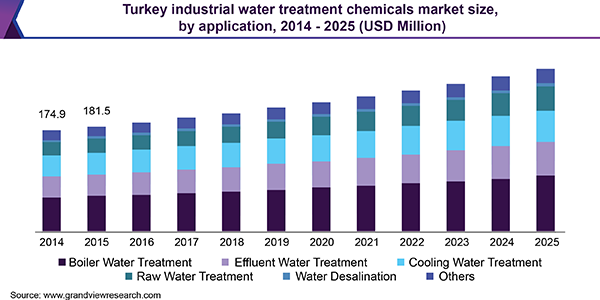 Groundwater contamination is turning out to be a major concern for governments in the Middle East. As a result, several governments in the Middle East have enforced limits on groundwater utilization. At the same time, plant setup costs are plummeting because Middle East governments are providing incentives to build wastewater treatment plants as part of the efforts to discourage the utilization of groundwater. Emerging technologies, such as membrane filtration, advanced oxidation processes (AOPs), and UV irradiation, are being used on a large scale for treating industrial water in the Middle East. For instance, in Iran, most processes used in the industrial wastewater treatment plants happen to be biological involving a combination of aerobic and anaerobic units. 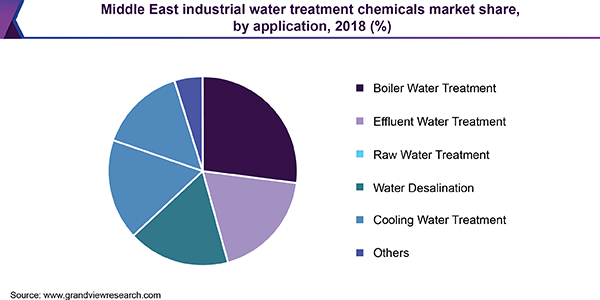 The effluent water treatment segment is projected to witness significant growth over the forecast period owing to the rising need in the Middle East to curb the industrial utilization of potable water or freshwater and instead reuse the industrial water by treating it with chemicals. Effluent water treatment can not only save on the costs incurred on water procurement but also safeguard the environment from pollution and contribute toward sustainable development. On the other hand, the raw water treatment segment accounted for a market share of 17.3% by revenue in the Middle East in 2018 and is expected to exhibit the fastest CAGR over the forecast period. Chemicals used in raw water treatment can protect industrial equipment from corrosion, scaling, and fouling. Hence, this process is widely used in industrial settings for cooling and product formulations.

Growing population and changing climatic conditions have triggered water scarcity in the Middle East. Countries, including the UAE, Iraq, and Saudi Arabia, are particularly facing water scarcity problems and require immediate attention. Given that some of the Middle East nations lack proper sanitation and water management systems, these countries have started opting for recycling and reusing wastewater by treating it using chemicals. The adoption of tertiary filtration is gaining traction because of its potential to raise the quality of the effluent before being discharged into the environment. Azerbaijan is one of the Middle East countries that are continuously implementing water treatment solutions based on the use of chemicals as part of the efforts to focus on proper reuse of industrial wastewater.

In Turkey, large volumes of wastewater are still discharged in water bodies without any treatment. As a result, the Turkish government has started initiating stringent actions against such discharges and has embarked upon industrial water treatment projects. Turkey has made significant progress in managing sanitation and water supply services and has also complied with the EU Water Framework Directive. Turkmenistan is particularly known for its oil & gas and petroleum industries. However, given that the nation’s main water resource is Amu Darya River, the nation is confronting irregularities in water supply and the water quality in the country is degraded. As a result, the government is investing in aggressively building facilities for treating industrial water in Ashgabat and nearby regions. These plants treat industrial wastewater using chemicals.

Key players in the Middle East industrial water treatment chemicals market include SUEZ; BASF SE; Ecolab, Inc.; Solenis; Nouryon; and Kemira, among others. These players supply their products to the incumbents of several industries, including power generation, chemicals, oil & gas, food & beverage, and pulp & paper, which are known for generating large volumes of wastewater. End-user companies of these products include Green Power International Pvt. Ltd., Pai Kane Group, Sterling and Wilson Ltd., and Mahindra Powerol. Market players, such as Kemira Oyj, BASF SE, Ecolab, Inc., and Solvay S.A. have also embarked upon backward integration and have started serving as a raw material supplier as well as a manufacturer of industrial water treatment chemicals. On the other hand, companies, including SUEZ, Cortec Corporation, and SNF, have embarked upon forward integration to be involved in the production, supply, and distribution of their products in the market. Exerting greater control over the value chain has allowed these companies to strengthen their profit margins and gave them better control over the pricing of their products.

This report forecasts revenue growth at global, regional & country levels and provides an analysis on the industry trends in each of the sub-segments from 2014 to 2025. For the purpose of this study, Grand View Research has segmented the Middle East industrial water treatment chemicals market report on the basis of application and region: