The global military and commercial parachutes market size was valued at USD 617.2 million in 2018 and is anticipated to witness a CAGR of 6.1% from 2019 to 2025. This is owing to the increase in military spending by governments across the world and the growth of adventure tourists pursuing aerial sports such as parachuting and skydiving.

Military parachutes are largely used for dropping payloads including soldiers, equipment, relief aids, and other supplies while carrying out military and rescue operations. The deployment of parachutes has been the most efficient and swift way of landing soldiers on the ground. As per the Stockholm International Peace Research Institute (SIPRI), the world military spending in 2018 had increased by 2.6% as compared to 2017. 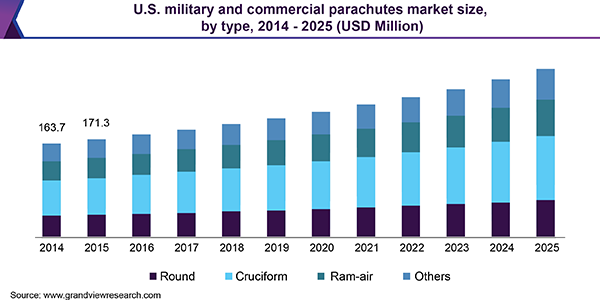 The share of military equipment and systems including parachutes in total military spending has grown considerably over the years. It is apparent from the USD 249 million parachute system contract awarded by the U.S. defense department to the Mills Manufacturing in 2019. Moreover, in the commercial sector, the growth of the market can be attributed to the growing demand of adventure enthusiasts for aerial sports as a recreational activity. These factors are likely to foster the growth of the market for military and commercial parachutes over the forecast period.

Long term military contracts with parachute manufacturing companies have become the prime driving factor for the growth of the market. The technological advancement in the parachute fabrics and harnessing tools is also expected to foster the growth in the long term. On the commercial front, social media has become a dominating marketing tool for the promotion of aerial sports and a platform to attract the millennials to sport activities such as parachuting and skydiving. Dubai in U.A.E and Queenstown in New Zealand have emerged as prominent hubs for commercial skydiving activities. For instance, more than 300,000 tandem jumps till date have been recorded at one of the leading skydiving company ‘NZONE Skydive’ in New Zealand.

The restraining factor affecting the growth of the market for military and commercial parachutes is stringent regulatory compliance to be followed by the manufacturers. The checks and regulations imposed on manufacturers are becoming strict owing to a considerable amount of risk to life if chutes fail to deploy during operations. The constant modifications of rules and regulations to ensure public safety during commercial skydiving activities negatively impacts the parachute industry. Moreover, the reports of accidents and deaths during commercial parachuting activities has created apprehensions among the people pursuing the activity. However, the advancement in textile technology and its applications in the parachute products has increased its durability and quality of commercial parachutes.

Based on type, the military and commercial parachutes market has been segmented into round, cruciform, ram-air, and others. The cruciform segment dominated the market in 2018 while ram-air type is expected to emerge as the fastest-growing segment over the forecast period. There has been increasing adoption of technologically advanced parachutes by military and commercial institutions. The chutes with controlled maneuverability for various applications such as troop landing, cargo drop, and emergency ejection in aircraft are likely to drive the market growth during the forecast period.

The utilization of round parachutes is becoming obsolete owing to its poor capability of controlled maneuvering and recorded instances of landing related injuries. The replacement of T10 parachutes by enhanced square shaped T11 parachutes by the U.S. defense department, validates the trend. In 2018, the cruciform chutes comprised major share in the market and are expected to be one of the prime revenue generators for parachute manufacturers in coming years. The attraction for aerial sports and rise in adventure tourism in Asia Pacific region is likely to boost the market for ram-air parachutes.

Based on application, the market for military and commercial parachutes has been segmented into troop/personnel, cargo/extraction, deceleration, emergency and others. The utilization of cargo chutes has been critical in the wake of natural disasters such as earthquake, floods, and regional insurgency situations. In 2018, the cargo segment comprised major share in the market for military and commercial parachutes and are expected to occupy considerable share during the forecast period. Moreover, the delivery of huge payloads increases the size, strength, and pricing attributes of the cargo parachutes. 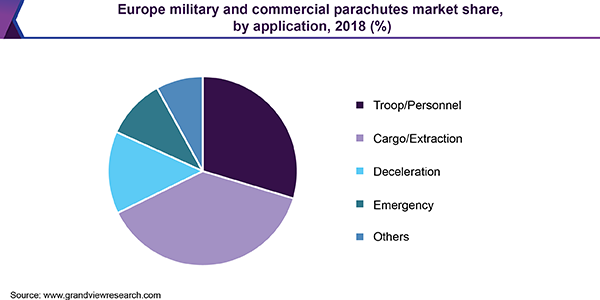 The troop or personnel parachutes is expected to emerge as the fastest growing segment over the forecast period owing to increasing attraction and adoption of aerial sports such as skydiving and parachuting among the millennial generation. The increase in the number of parachuting and adventure enthusiasts in various parachuting associations across the world and decrease in the number of skydiving fatalities is likely to foster the popularity of the sport in the coming years. As a result, the personnel chutes, used prominently in skydiving institutes are likely to witness considerable growth throughout the forecast period. The applications of emergency and deceleration parachutes will also witness growth owing to rise in military aircraft, manufactured and purchased by emerging countries such as India, Thailand, and Indonesia.

Asia Pacific is projected to emerge as the fastest-growing regional market for military and commercial parachutes. The annual increase in arrival of adventure seeking tourists in the region, growing attraction towards aerial sports such as skydiving and parachuting, and the increasing disposable income in economies such as China and India have emerged as the key regional growth drivers. Furthermore, the role of associations like Asiana Parachute Federation, New Zealand Parachute Federation, and Australia Parachute Federation, has been gaining significant importance. Their efforts to promote and increase the standards in international skydiving competitions and to ensure the safety of the skydivers is likely to foster the growth of aerial sports in the region over the next six years.

For instance, in 2018, Airborne Systems has been awarded the contract of enhanced multi-mission parachute systems for the U.S. Marine Corps. It will help the company to expand its customer base and instill trust in company’s product quality and safety attributes. Similarly, in 2019, Mills Manufacturing signed a 10 year and USD 249 million contract with the U.S. government to manufacture T-11 parachutes.

This report forecasts revenue growth at global, regional, and country levels and provides an analysis of the latest industry trends in each of the sub-segments from 2014 to 2025. For the purpose of this study, Grand View Research has segmented the global military and commercial parachutes market report based on type, application, and region: