The global minimally invasive thoracic surgery market size was valued at USD 3.2 billion in 2016 and is projected to grow at a CAGR of 5.69% over the forecast period. This can be attributed to the increasing prevalence of chronic diseases such as lung cancer that demands better, quicker, and patient-friendly diagnostic and therapeutic facilities, growing preference for the minimally invasive procedures, and the technological advancements meeting patient needs. 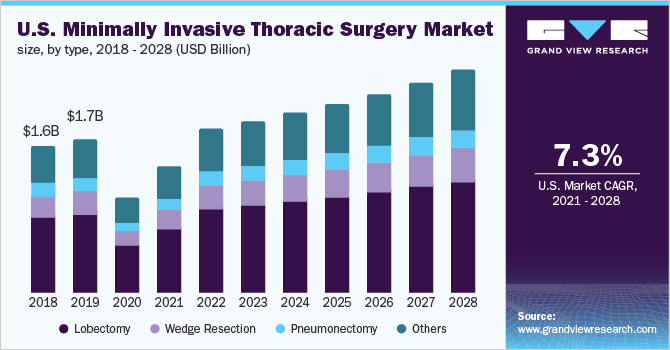 According to cancer statistics by the American Cancer Society, about 1.8 million new cases of lung cancer were diagnosed in 2012. Lung Cancer accounts for 20% of the cancer deaths worldwide and is preventable due to development of surgical procedures, which is expected to increase the demand for the Minimally Invasive Surgery market.

In 1994, Computer Motion introduced the Automated Endoscopic System for Optimal Positioning Robotic System (AESOP), which is a voice-activated robotic instrument to assist surgeons in minimally invasive surgeries. In 2001, the FDA approved ZEUS system, which was developed to assist surgeons, however; it was discontinued in 2003 following the merger of Intuitive Surgical and Computer Motion.

Geisinger Health System launched ProvenCare, which is an initiative providing the patients with the “guarantee” to cover all expenses that arise due to complications in the 90 days of follow-up admissions. Such initiatives help in quality improvement with reduction in surgical errors and complications while reducing costs.

Based on the type of surgeries, the market is segmented into lobectomy, wedge resection, pneumonectomy, and others. Lobectomy is the most commonly used operation for treating lung cancer. According to a 2011 study published in NCBI, which was conducted by the Cancer Care Outcomes Research and Surveillance (CanCORS), about 1200 patients were diagnosed with non-small cell lung cancer (NSCLC), out of which 955 patients underwent surgery. Around 524 patients opted for lobectomy, about 128 of them opted for pneumonectomy and 209 patients had opted for wedge resection, segmentectomy, sleeve lobectomy, and laser excision.

According to a 2016 survey published in the NCBI, the minimally invasive lobectomy procedures were found to have shorter median hospital length of stay, improved two-year survival, and increased 30-day readmission rate. Such benefits further help in higher adoption of the technology thereby rendering the market growth.

North America dominated the market owing to the presence of favorable scenario for technological advancements, which leads to the development of products that comply with the evolving patient needs, availability of newly introduced devices, the presence of skilled surgeons and organized regulatory and reimbursement bodies.

As most of the patients undergoing these surgeries are old aged, Medicare reimbursement policy helps unburden the expenses and becomes an important aspect of the market growth. Other organizations delivering medical policies help in reducing the cost burden arising from the surgeries and the post-operative period.

Smoking is one of the direct risk factors associated with lung cancer. Majority of the cancer deaths are believed to be an outcome of smoking. Involvement of a person in this activity for a longer period increases the risk of lung cancer. North America and Northern Europe show high estimated rates of lung cancer due to high incidence rates of tobacco use. Thus, these areas are potential markets for minimally invasive surgeries as the high prevalence along with the availability of technologically advanced procedures favors the market growth.

This report forecasts revenue growth and provides an analysis on the industry trends in each of the sub-segments from 2014 to 2025. For the purpose of this study, Grand View Research has segmented the minimally invasive thoracic surgery market based on type and region:

How big is the minimally invasive thoracic surgery market?

What is the minimally invasive thoracic surgery market growth?

b. North America dominated the minimally invasive thoracic surgery market with a share of 49.4% in 2019. This is attributable to the presence of favorable scenarios for technological advancements, which leads to the development of products that comply with the evolving patient needs, availability of newly introduced devices, the presence of skilled surgeons, and organized regulatory and reimbursement bodies.

Who are the key players in minimally invasive thoracic surgery market?

What are the factors driving the minimally invasive thoracic surgery market?

b. Key factors that are driving the market growth include preference for minimally invasive procedures, rising prevalence of chronic diseases, rapid technological advancements, and the introduction of novel products.