The global modular instruments market size was valued at USD 2.10 trillion in 2019 and is expected to expand at a compound annual growth rate (CAGR) of 6.3% from 2020 to 2027. The demand is prominently influenced by the growth of the test and measurement instruments market. Modular instruments are equipment that is used to test, monitor, and are user-defined measurement systems. Technological innovations and advancements in communication and networking coupled with increased electronic device adoption are anticipated to drive the market growth. Moreover, the instruments are widely accepted by smartphone manufacturers, network providers, electronic component manufacturers, among others, thereby bolstering the growth. 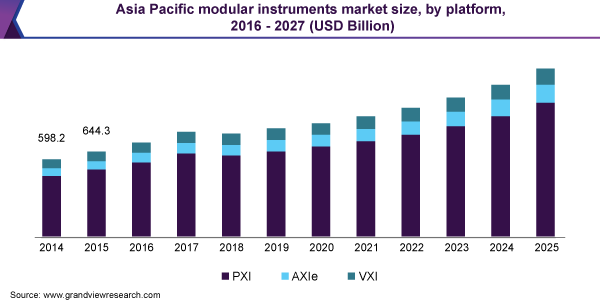 Furthermore, an increase in the number of IoT devices is generating avenues for market growth. For instance, according to GSMA, there would be 30 billion connected devices by 2026. The IoT connected devices include tracking devices, vehicles, utility meters, consumer electronics, and wearable technology vending machines, as well as smartphones and tablets. Thus, increased adoption of the aforementioned devices has led to the growing need for testing, inspecting, and verifying the smart products and other equipment to ensure the fidelity of the deployed devices. Moreover, an increasing number of connected devices results in more spending on testing the feasibility of the devices, thus resulting in the adoption of modular instruments.

The growing adoption of electronics and semiconductor devices has led to the set-up of several manufacturing facilities in the Asia Pacific region. The ever-increasing advancements in electronics and semiconductor devices have led to the growing complexities and design constraints of the devices. Thus, owing to the aforementioned factor there is been need to test, inspect, and monitor the performance of the devices leading to the adoption of modular instruments among the manufacturers in the region.

In addition, the use of wireless communication devices and the emergence of Narrowband IoT (NB-IOT) and mobile IoT standards such as Bluetooth Low Energy (BLE) and LTE-M are the factors anticipated to drive the market growth. Therefore, the rising demand for wireless technologies is fueled by the advancements in the wireless communication industry, such as higher mobility, adoption of smart devices, and growth of mobile data traffic owing to increased adoption of smartphones and enhanced network coverage. The aforementioned developments have resulted in the need of modular test equipment in order to reduce issues in the initial development stage of the wireless equipment.

However, the investments in the deployment of 5G are anticipated to generate major growth opportunities. The extensive research on 5G technologies in order to reduce the development time and hardware complexities is further boosting the demand for modular instruments. The deployment of 5G will support many applications such as autonomous vehicles, connected cars, IoT, and various end-use applications. Moreover, the proliferation of the aforementioned applications will further generate avenues for market growth.

In terms of revenue, the telecommunication segment dominated the market with a revenue share of 35.4% in 2019. The developments in wireless communication technologies such as long-term evolution (LTE), LTE-A, 4G have resulted in bolstering the segment growth. Furthermore, the enhanced competencies of LTE advanced standards are considered to be the path for the development of 5G communications. Thus, owing to the 5G evolution the telecommunications segment is anticipated to witness significant growth over the forecast period.

In terms of revenue, the PXI segment dominated the market with a revenue share of 78.4% in 2019. The PXI platform offers several advantages such as improved performance, mainstream software models, and reduced costs. Thus, owing to benefits the PXI platform is widely been adopted by several end-users. Moreover, PXI platforms enable users to integrate traditional measurement capabilities with modern computer-based modular architecture such as motion control, machine vision, and automation. 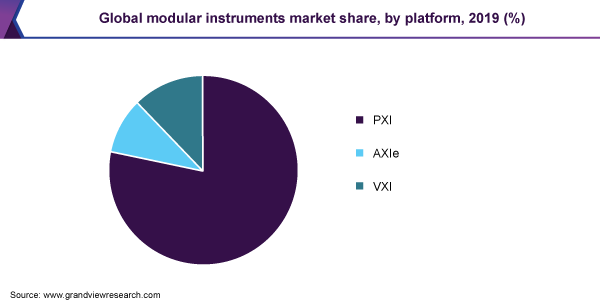 Meanwhile, AXIe segment is estimated to expand at a CAGR exceeding 6.5% over the forecast period. The AXIe features triggering, timing, and module-to-module data transfer vital for the implementation of high-performance modular instruments systems. Also, AXIe includes LAN and PCIe interfaces that can act as a virtual PXI instruments. Owing to the aforementioned benefits and flexibility of the platform is expected to drive the segment growth over the forecast period.

Asia Pacific dominated the overall industry in 2019 and accounted for over 35.0% of the revenue share. The regional market is likely to retain its dominance over the forecast period. The growing investments in the aerospace and defense industry by countries such as China and India are expected to contribute towards the market growth. For instance, in 2018, the Chinese companies operating in the aviation industry acquired western aviation companies for around USD 400 million. Furthermore, the growing number of mobile devices in the region has resulted in the demand for wireless test equipment, thus bolstering the regional growth.

North America is expected to witness substantial growth, registering a CAGR of approximately 5.0% from 2020 to 2027. Increasing demand for modular instrument from various end-use sectors such as electrical and electronics, automotive is expected drive revenue growth of North America modular instrument market over the forecast period. Furthermore, the inclination towards intelligent transportation systems and connected cars is expected to drive the regional market growth.

The market is consolidated and is characterized by high competition. Key players operating in the market include Keysight Technologies, National Instruments, Fortive Corporation, and Viavi Solutions. These market players particularly focus on entering into mergers and acquisitions and joint ventures/collaborations in order to enhance their market presence. For instance, in October 2018, HORIBA GmBh announced the acquisition of FuelConAG, hence the company will be part of HORIBA automotive test systems division offering brake, driveline, and emissions test systems.

Market players are increasingly investing in research and development in response to the growing demand for advanced technology from developed economies. For instance, in July 2018, National Instruments announced collaboration with Spirent Communications plc a provider of analytics, verification, assessment, and device intelligence solutions. This collaboration was aimed at developing test systems for 5G New Radio (NR) devices. Moreover, 5G chipset and device manufacturers can validate the performance of the 5G NR smartphones and IoT devices without requiring access to complex and expensive 5G base stations. Some of the prominent players in the modular instruments market include:

The report forecasts revenue growth at global, regional, and country levels and provides an analysis of the latest industry trends and opportunities in each of the sub-segments from 2016 to 2027. For the purpose of this study, Grand View Research has segmented the global modular instruments market report based on platform, end use, and region: