The global near field communication (NFC) market size was valued at USD 4.80 billion in 2015. The growing mobile penetration with improved payment infrastructure and data connectivity presents a significant opportunity for the growth of NFC-enabled mobile payment. 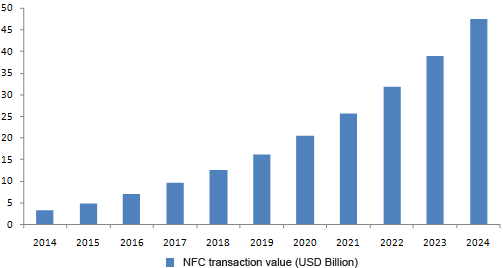 The growing popularity of mobile devices and the increasing number of online consumers are expected to drive the demand for e-commerce. The near field communication technology is extensively used in pay terminals using mobile devices. Retailers, such as Target, Macy's, and Walgreens, have started using Google wallet technology. Businesses in the emerging markets, such as India, China, Japan, Taiwan, and Malaysia, are localizing the content for mobile platforms for maximizing potential sales.

Furthermore, well-established infrastructure and device penetration in developed markets are supporting mobile transactions among individuals and between financial institutions and consumers. The increasing demand for enhanced government policies and security issues is expected to drive the near field communication market growth. Enterprises across the industries are developing and deploying new products for improving productivity with increased security. The increasing need for lowering the cost of ownership and the increased convenience need is further expected to continue dictating the industry development.

The growing development in NFC technology has encouraged consumers to make small and large payments using mobile devices. The proliferation and adoption of mobile payments including digital wallets and usage of apps have encouraged the non-payment technology firms to enter into payment landscapes which are expected to further drive the market growth. Furthermore, the increasing penetration of smartphones in the developing economy has led to the development of technology.

The near field communication cover is considered as an accessory for converting smartphones into NFC-enabled smartphones. The technology is yet to be deployed in the emerging regions and has penetrated in developed countries such as the U.S., Canada, and the UK. The flexibility of the product for converting the devices to NFC-enabled is expected to lead the growth.

The near field communication-based application segment can be categorized into access control, ticketing, data sharing, medical devices, transaction, product identification, and others. The transaction application is estimated to dominate the business in terms of revenue in 2015. The proliferation of smartphones with an increasing need for better consumer experience is expected to propel the demand.

The ticketing segment enables the commuters to use the near field communication mobile for a contactless transport ticket. The NFC-based ticketing application stores the transit details digitally on the mobile phone and allows the passenger to tap the mobile phone for boarding. The technology has led to the implementation of a cost-effective transport ticketing solution, which is expected to enhance the customer experience.

The increasing need for the digitizing of medical records and for tracking the fitness of consumers has led to the enhanced demand for near field communication-based medical devices. For instance, medical devices, such as Jawbone UP4, track the heart rate, and also assist in making payments to the retailers. The device’s capability of multi-tasking is also expected to influence the industry positively.

The Asia Pacific NFC-based market is expected to remain the key revenue-generating region, accounting for over 20% share in 2015. The increasing penetration of smartphones and tablets is estimated to be the reason behind the adoption of the NFC technology. The rapid diversification of mobile payment services has accelerated collaboration amongst the industry participants resulting in the development of the technology. The international banks have been enthusiastically investing in building the mobile payment network which is further expected to increase the application segment collaborating the financial service provider and retailers.

The European market is expected to witness major developments in various applications which include near field communication-based transactions, ticketing, and access control over the forecast period. Growing adoption of NFC technology has led to increased implementation of POS terminals at retail outlets for contactless mobile payments and Visa Cards.