The global neckwear market size was valued at USD 3.7 billion in 2018 and is expected to expand at a CAGR of 2.1% from 2019 to 2025. The rising trend of pairing neckwear with casual dressing is projected to boost the demand. The product gives a professional, poised, and elegant appearance. Increasing demand from the key consumer such as bankers, media professionals, and students is anticipated to further drive the growth of the market.

Neckties project professionalism, confidence, authority, power, and exclusivity, which is anticipated to drive the demand. Many primary schools, business schools, and universities include neckties as a part of the uniform. Organizations such as military regiments, clubs, and professional associations, among others use specific colored and patterned neckties as a sign of membership. This factor is anticipated to further fuel the product demand. 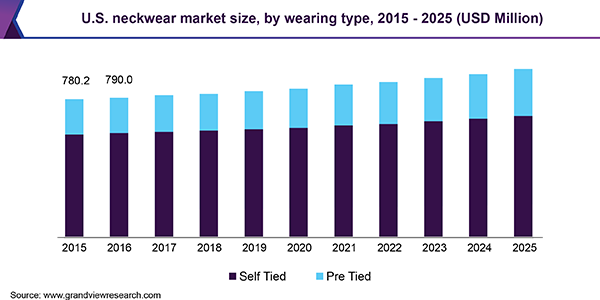 Many neckwear manufacturers focus on product innovation in terms of colors, patterns, materials, and designs to attract newer consumers. The rising trend of pairing ties with casual wear is anticipated to positively influence market growth. Manufacturers have introduced neckwear with floral and deco design, soft-touch fabric such as brushed flannel, heathered yarns, Donegal wools, knits, and chambray ties for different occasions. For instance, in 2017, Korbata, a Guatemalan manufacturer of men’s fashion accessories launched a new collection called Nawales, inspired by the Mayan worldview and their sacred calendar representing an element of nature and energy.

Many organizations across the globe have opted for casual dressing and tie-less ensembles instead of traditional formal wear, which is anticipated to hamper the growth of the neckwear market. In 2017, British hospitals banned the use of jewelry, long sleeves, and neckties for hospital professionals due to the rising concerns over hospital-borne infections. Also, many factory lines involving heavy machinery have stopped banned the use of the product owing to safety concerns. Such factors are projected to further restrict the growth in the near future.

Neckties held the largest market share in 2018 and are projected to witness the fastest growth over the forecast period. The growth is attributed to the high adoption of neckwear for workplaces and formal occasions. Neckties are preferred by corporate executives and businesspersons owing to their simple and sober designs. Also, the rising demand for neckties with different width sizes coupled with the availability of a wide range of products is expected to support the growth. Bankers, hotel employees, students, and media executives are some of the major consumers of neckties. 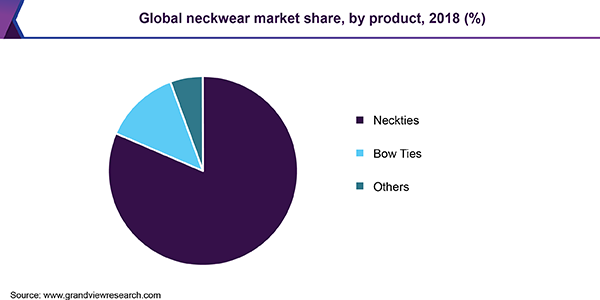 Bow tie segment is estimated to continue witnessing the fastest CAGR over the forecast period. The growth is attributed to the rising adoption of bow ties as casual wear accessories, especially among millennials. Bow ties are preferred for ball events owing to their elegant appearance and attractive color and shape. Consumers prefer cotton bow ties for an informal look and dark silk variants for a formal look. These factors are expected to boost the growth of the segment.

Asia Pacific is estimated to continue holding the largest market share from 2019 to 2025. The region is projected to expand at the fastest CAGR of 2.6% over the forecast period, owing to the significant rise in the working population. The increasing influence of western culture is boosting the adoption of bow ties in the region. Factors such as rising disposable income, fashion consciousness, and commercial sector are expected to fuel the regional growth in the forthcoming years. Countries such as China, India, Japan, and Korea are supporting the regional growth owing to the growing population, a number of private schools and colleges, and a booming economy.

North America is estimated to witness significant growth over the forecast period. Increasing adoption of neckwear by celebrities is anticipated to positively influence the consumer purchasing decision. Also, the presence of dress code for bankers, lawyers, therapists, psychiatrists, and other such professions is likely to boost the regional product demand. The U.S. alone has the highest number of bankers who traditionally have neckwear as an essential part of the dress code.

Major market players include Brooks Brothers Group, Inc.; Giorgio Armani S.p.A.; Ralph Lauren Corporation; PVH Corp.; LVHM; Brackish Brand; Vineyard Vines; The Tie Bar; Turnbull & Asser; and Battistoni. Consumers find it difficult to select the most suitable neckwear product for them in terms of the type, fabric, width, color, and occasion. Key players focus on solving this issue by offering unique services. For instance, in 2017, The Tie Bar, a Chicago-based menswear company, launched a subscription model for U.S. based consumers to improve its customer retention ratio. The company delivers three brand new bow ties or neckties to the consumers depending on their product preference in two intervals-either in six months or a year.

This report forecasts revenue growth at global, regional, and country levels and provides an analysis of the latest industry trends and opportunities in each of the sub-segments from 2015 to 2025. For the purpose of this study, Grand View Research has segmented the global neckwear market report on the basis of product, wearing type, and region: