The New York cannabis market size was valued at USD 1.8 billion in 2018 and is estimated to register a CAGR of 14.7% over the forecast period. Use of cannabis has been legalized in the state of New York for medical purposes, while recreational use of cannabis is expected to be legalized by late 2019 or early 2020. However, a majority of cannabis is being traded through illicit channels. In order to curb ongoing illegal trafficking, the government is expected to cut down product prices and improve monitoring of the supply chain.

Marijuana is increasingly being used for treatment of chronic diseases such as Parkinson’s disease, cancer, arthritis, Alzheimer’s disease, along with neurological disorders such as depression, anxiety, and epilepsy. Growing adoption of cannabis for therapeutic purposes and imminent legalization of recreational marijuana are key factors driving the market. 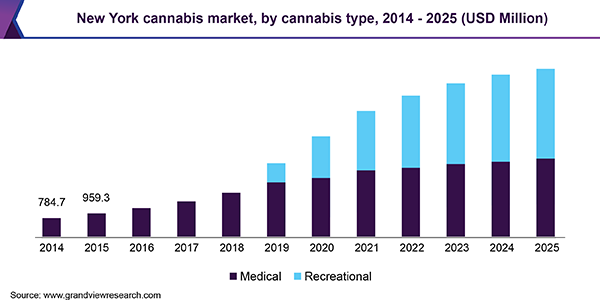 Legalization of cannabis in the state is expected to significantly reduce illegal cannabis sales, create new job opportunities, and generate substantial revenue. The revenue can be generated by the government in terms of taxes levied. Furthermore, an increase in awareness about benefits of medical cannabis has supplemented the number of registered medical practitioners in New York that are willing to prescribe cannabis, powering market expansion in the state.

However, even though the market has become more open to cannabis after legalization in U.S. states, banking access remains a major problem for businesses seeking financial help. Banks are not allotting accounts to cannabis businesses, which has led to economic challenges and other unfavorable conditions. This is because cannabis is a federally illegal drug, and therefore banks are not keen in assisting cannabis businesses, even in states that have legalized the drug. Thus, financial and banking challenges pertaining to marijuana businesses and interstate trading ban in the U.S. may somewhat hamper growth to some extent.

Medical marijuana segment dominated the overall market in 2018, with a revenue of USD 1.84 billion, owing to its increasing adoption in various medical applications and the increasing number of registered medical practitioners willing to prescribe medical cannabis. For instance, according to the New York State Department of Health, the number of registered medical practitioners increased from 611 in 2016 to 1,718 in 2018. Therefore, a greater inclination towards cannabis-based drugs due to their medical benefits is bolstering the state’s market.

With the eventual expansion of legal premises for the use of medical marijuana in the state, the government is expected to levy taxes on its products to generate revenue from cannabis cultivation. Furthermore, the government is keen on legalizing recreational cannabis, which is expected to shift the preference of users from illegal to legal cannabis. However, it has been observed that the legalization of recreational marijuana in other states or in countries such as Canada has caused consumers to shift from medical to recreational purposes, owing to easy availability, wide variety, and lower price.

Recreational marijuana segment is expected to experience the fastest growth during the forecast period, owing to factors such as low price and easy access. This can also be attributed to ongoing efforts to eradicate the marijuana black market and focus on gaining tax revenues from legal sales.

Chronic pain application segment led the market in 2019 and is projected to maintain steady growth over the next few years. Different types of chronic pain include neurogenic pain, arthritis, cancer pain, lower back pain, headaches, neck pain, and face pain. Moreover, chronic pains are also associated with a lot of other medical conditions, which can increase the overall adoption of cannabis for treatment of pain.

According to the New York Health Department, more than 50% of registered patients undertaking medical marijuana therapy have suffered from chronic pain. The geriatric population is more susceptible to acute pain and is, therefore, increasingly opting for medical marijuana. Increasing awareness regarding the benefits of CBD consumption is driving its adoption, thus driving the medical marijuana market in the state.

On the other hand, mental disorders application segment is expected to witness the highest CAGR of 11.8% over the forecast period, due to increasing adoption for treatment of mental diseases that are otherwise unresponsive to alternate treatment options. Psychological conditions such as PTSD, anxiety disorders, depression, bipolar disorder, multiple sclerosis, ADHD, Alzheimer’s disease, and Parkinson’s disease can be effectively treated with medical cannabis, owing to its therapeutic benefits.

On the basis of products, the New York cannabis market is segmented into buds, oils, and tinctures. Buds accounted for the highest market share in 2019 and will experience the fastest growth over the next seven years, due to imminent legalization of recreational cannabis. Buds are used for smoking and have exhibited it capabilities to alleviate chronic pain and reduces progression of cancer of Alzheimer’s disease.

Smoking marijuana is economical as compared to oils or tinctures, and has a rapid therapeutic onset of action, creating a greater preference for buds. They are also preferred for recreational purposes and this segment is projected to emerge as a potentially leading one, but only after the state government completes its legalization. However, the adverse effects of smoking cannabis include chronic cough, excess phlegm, and other respiratory diseases such as chronic bronchitis & COPD. Smoking is also not accepted in many social circles & establishments and is not medically prescribed to children. The increasing awareness regarding the ill effects of smoking buds as compared to using oils or tinctures are expected to impede this segment over the forecast period. 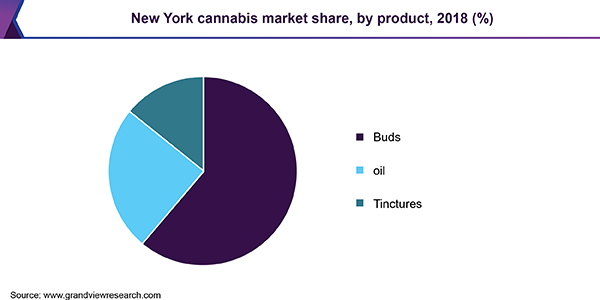 Marijuana oils are anticipated to grow at a lucrative pace, owing to their use as an effective medical drug in the treatment of cancer, nausea, and other conditions. Cannabis oil is available in various forms, such as edibles, vapes, and topical. Therefore, marijuana oil sales are gaining traction. The demand for smoking marijuana oil is decreasing owing to social stigma regarding smoking. Moreover, doctors are not comfortable with patients smoking buds as the cigarette can contain potentially harmful components, such as particles, tar, and other chemicals.

Some of the key players operating in the state are Citiva; Valley Agriceuticals; PalliaTech, Inc.; MME LLC; Etain Health LLC; PharmaCann; and Columbia Care LLC. The growth in demand is expected to favor the entry of several new players in the future. However, financial and banking challenges pertaining to marijuana businesses & interstate trading ban in the U.S. may somewhat hamper the entry of new marijuana businesses. Industry players focus on implementing strategic initiatives such as marijuana cultivation, product launches, mergers & acquisitions, collaborations, and gaining regulatory approvals, to strengthen their market presence. For instance, in January 2018, Etain Health received approval for manufacturing lozenges and ground flowers for vaporizers. The approval was anticipated to strengthen its product portfolio, thus contributing to revenue growth.

This report forecasts revenue growth and provides an analysis on the latest industry trends in each of the sub-segments from 2014 to 2025. For the purpose of this study, Grand View Research has segmented the New York cannabis market report on the basis of cannabis type, product, and medical application: