The global non-opioid pain patches market size was valued at USD 732.6 million in 2018 and is expected to grow at a compound annual growth rate (CAGR) of4.6% from 2019 to 2026.Global rise in chronic and acute pain related disorders and various benefits associated with non-opioid pain patches over conventional medications are some of the major factors driving the market growth. 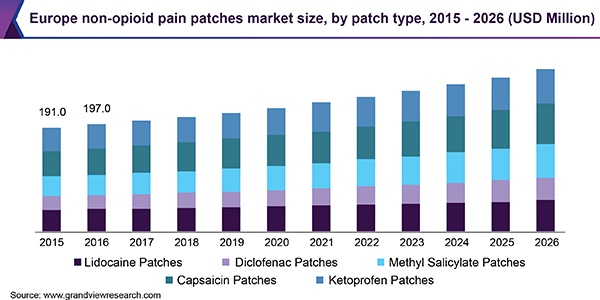 The global opioid epidemic has escalated at an alarming rate, owing to which several countries have opted for other alternatives for the management of pain. In November 2017, opioid crisis was declared as a national emergency indicating the impact of opioid addiction in the U.S. According to data from National Institute of Drug Abuse, an estimated 90 Americans die of opioid overdose every day.

The Centers for Disease Control and Prevention estimates that the economic burden brought upon the country because of opioid misuse amounts to USD 78.5 billion every year. These costs include those incurred for healthcare expenditure, addiction treatment, loss of productivity, and criminal justice involvement. These facts are indicative of the growing need to curb this addiction. Thus, demand for other alternatives that are safe has increased, boosting market growth.

Pain and related disorders are increasing at a rapid rate globally owing to changes in lifestyle, lack of physical activity, and growing number of surgical procedures. Chronic and acute pain affects more Americans than diabetes, cancer, and heart diseases combined, according to the U.S. Department of Health and Human Services (HHS). HHS also reported that pain is the most common reason for visits to healthcare facilities, which makes it the foremost cause of disability in patients, thereby contributing largely to healthcare costs. The aforementioned factors are encouraging the discovery of safe and effective management options such as non-opioid pain patches, thus boosting their market growth.

Based on patch type, the non-opioid pain patch market is segmented into lidocaine, diclofenac, methyl salicylate, capsaicin, and ketoprofen patches. These are used to alleviate pain and provide efficient drug delivery for a prolonged period. As they bypass the first pass metabolism, they are more efficient in drug delivery and prohibit users from becoming addicted to the drug.

In comparison to opioids that exhibit a wide range of adverse effects such as nausea, vomiting, respiratory depression, constipation, androgen deficiency, tolerance, and physical dependency, these patches provide users with efficient treatment and management of chronic and acute pain. Drug dependence and misuse is significantly reduced with the usage of these patches, and this is expected to increase their demand and propel the market.

Lidocaine patches are one of the most commonly available non-opioid patches for the treatment of chronic and acute pain. Owing to their safety profile and proven efficacy, lidocaine patches have been recommended as a first-line therapy for the treatment of neuropathic pain in older patients as well as those suffering from shingles, and this is expected to boost market growth during the forecast period.

Compared to oral diclofenac tablets, these patches are preferred by patients due to their once-a-day application and enhanced efficacy. Flector patch developed by IBSA Institut Biochimique SA is an example of a diclofenac patch that aids in the management of acute and chronic pain. The product is licensed by Alpharmca Pharmaceuticals LLC which operates as a subsidiary Pfizer, Inc.

Methyl salicylate patches held a considerable share in the market owing to easy availability and consistent usage for the treatment of acute pain. PanaFlex Patch is a methyl salicylate patch developed by GSK, which aids in the management of aching and tired muscles. In addition, the product can be used for the temporary treatment of arthritis and rheumatoid arthritis. Furthermore, capsaicin patches and ketoprofen patches are also gaining traction in the market owing to their increased adoption as well as demand for alternative therapies.

Hospitals held a considerable market share owing to frequent patient visits/admissions for pain management, especially by patients suffering from musculoskeletal disorders and other diseases that cause acute and chronic pain. Long-term use of painkillers usually bring about an additional risk of medication-related adverse effects. Thus, physicians usually prescribe patches instead of oral drugs. 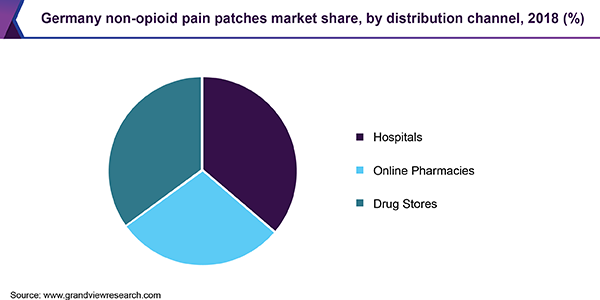 OTC products and prescription medicines are mostly purchased from drug stores. Prominent drug stores across the U.S. stock products as a large percentage of population suffers from pain-related disorders. As the nation is facing an opioid epidemic, many users are shifting to these patches to manage pain, boosting the market.

In 2018, North America accounted for the largest revenue share of the market. Increasing incidence of pain and pain-related disorders coupled with the escalating opioid epidemic in the U.S. are among factors driving the market in this region. According to American Chiropractic Association, Americans spend at least USD 50 billion on the treatment of back pain. Back pain is the second most common ailment for which patients visit doctors, and it is largely outnumbered by upper respiratory infections. Thus, therapies to combat pain need to be developed in this region. As these patches alleviate pain, reduce the risk of adverse effects, and have a lesser chance of being misused & leading to addiction, their demand is expected to be high in this region.

The Asia Pacific region is witnessing a lucrative growth in the pharmaceutical and medical device industries. The region exhibited the highest CAGR during the forecast period. With a sharp rise in lifestyle-related disorders and sedentary lifestyle, there has been a rise in the number of patients suffering from chronic and acute pain. With major developers making efforts to ensure the availability of non-opioid patches in the region, Asia Pacific is likely to witness significant growth over the forecast period.

Latin America has also been witnessing immense burden with respect to back pain and other musculoskeletal disorders, and this has been adding to healthcare expenditures of the nations in the region. Incremental rise in the number of patients and increasing product cognizance & adoption has also been accelerating market growth in the region.

The market is highly fragmented as various companies are engaged in their development to aid a large global population suffering from chronic pain.

Various market players use a wide range of technologies to develop products that facilitate effective and prolonged drug release to increase consumer base and product penetration. In addition, the market is very competitive in nature with intense competition between existing players and new entrants.

In addition, key participants are engaged in mergers and acquisitions to expand their existing product portfolios. For instance, in July 2013, Acorda Therapeutics announced the acquisition of two products from NeurogesX, Inc. to further strengthen its neuropathic pain management product portfolio. The two acquired products include, Qutenza and Phase 3-Stage Product NP-1998 used for the treatment of Postherpetic Neuralgia and diabetic neuropathy, respectively.

Major market players are also engaged in collaborations with distribution companies to increase product penetration. For instance, in October 2014, Richmar, Inc. announced the distribution of LidoFlex Pain Relief Patch by two companies of the Scrip Companies group. The companies are suppliers of chiropractic products and physical therapy equipment & supplies. Some of the prominent players in the non-opioid pain patches market include:

This report forecasts revenue growth at global, regional, & country levels and provides an analysis of the industry trends in each of the sub segments from 2015 to 2026. For the purpose of this study, Grand View Research has segmented the global non-opioid pain patches market report on the basis of patch type, distribution channel, and region: