The global Non-small Cell Lung Cancer (NSCLC) therapeutics market size was valued at USD 6.2 billion in 2016 and is projected to grow with CAGR of 7.5% over the forecast period. This high growth is attributed to the increasing patient population, expected entry of several drugs, and rising investment by industry players in R&D of NSCLC therapy.

Rising prevalence of NSCLC across the globe due to increasing air pollution and smoking habits amongst the people is likely to drive the market over the coming years. The American Cancer Society estimates that about 224,390 new lung cancer patients will be diagnosed in 2016 in the US. Lung cancer is the one of the highest death-causing diseases across the world.

The presence of a strong pipeline for NSCLC is projected to propel the growth over the coming years. For instance, “fruquintinib (HMPL-013)”, a drug developed to treat advanced non-small cell lung cancer is in the clinical trial phase. Furthermore, Avelumab developed by Merck KGaA is currently in the pipeline. It is a fully human monoclonal PD-L1 antibody. Thus, development of such advanced treatments is expected to drive the market during the forecast period.

In 2015, Alimta accounted for the largest share of the market. The drug is manufactured by Eli Lilly and Company. However, the drug is expected to witness decline in growth due to the patent expiration of Alimta in Europe and Japan in 2015. Competition from generic drugs and decreasing demand due to the entry of more efficient drugs is projected to affect the market

Alecensa (alectinib) is expected to observe the highest growth during the forecast period. This can be attributed to an increasing geographical penetration, growing awareness, and superior progression-free survival rate than Xalkori.

Tagrisso, a drug by AstraZeneca is also expected to observe a significant growth rate over the coming years. Recent approvals in various geographical regions and increasing demand are the key factors for growth. For instance, the drug recently received approval in Canada and Brazil for NSCLC in July and December 2016 respectively. In addition, it is expected to be launched in China in the second half of 2017. 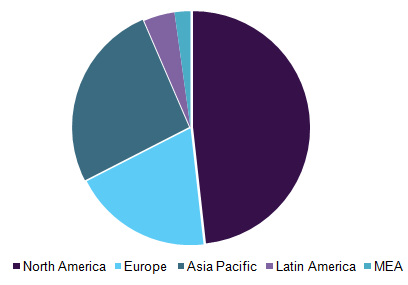 North America accounted for the largest share of all the regions in 2016. This is attributed to the entry of newer drugs, high investment by players, acceptance of costly drugs, and increased government funding for research and development activities.

North America is expected to maintain its dominance during the forecast period and is one of the most lucrative regions for the NSCLC market. This is due to the presence of a strong pipeline and research activities undertaken by various industry players and academic institutions.

Pricing pressure by the governments of European countries is likely to affect the market negatively during the forecast period. For instance, in October 2016, the National Institute for Health and Care Excellence (NICE) disapproved funding for Opdivo, as it did not meet the required cost-to-benefit ratio.

Several players are operating in the NSCLC market. NSCLC accounted for about 85% of all the lung cancer cases. Hence, companies are focusing on the development of drugs for the treatment of NSCLC. Some of the key players in the industry include GlaxoSmithKline plc; Novartis; AstraZeneca; Eli Lilly and Company, Pfizer Inc., and F. Hoffmann-La Roche Ltd.

Collaborations and acquisitions of well-established players, development of innovative products, and widening the indications for available medicines are the key strategies adopted by the players.

For instance, in March 2016, Tagrisso received approval in Japan for the treatment of EGFR T790M mutation-positive recurrent or inoperable NSCLC. About 30% - 40% of Asian NSCLC patients have EGFR mutation at diagnosis. Hence, the development of such targeted therapies is likely to boost the market during the forecast period.

This report forecasts revenue growth and provides an analysis on the latest trends in each of the sub-segments from 2014 to 2025. For the purpose of this study, Grand View Research has segmented the Non-small Cell Lung Cancer (NSCLC) Therapeutics market on the basis of drug and region: