The global non-volatile dual in-line memory module market size was valued at USD 912.9 million in 2019 and is expected to grow at a compound annual growth rate (CAGR) of 39.7% from 2020 to 2027. Rapidly rising demand for non-volatile memory for data center applications to protect data losses from a sudden power outage is estimated to propel market growth. The non-volatile dual in-line memory module (NVDIMM) operates as non-volatile Random-access Memory (RAM). The major advantage of this memory is to provide a secured data backup solution due to unexpected power loss in a storage server. 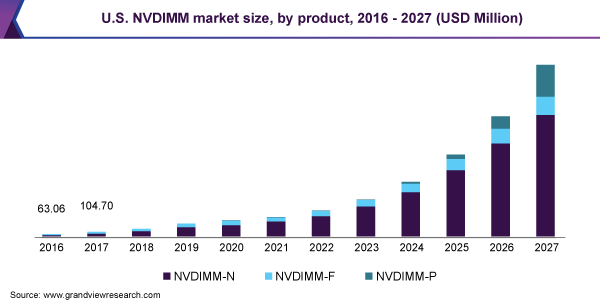 The non-volatile dual in-line memory module is primarily made of a combination of DRAMs, a NAND flash, an NVDIMM controller, and a supercapacitor. During service outage, the data has been stored from DRAM to the NAND flash with the help of a supercapacitor. Additionally, once the data transmission process gets completed, the supercapacitor goes into zero states. Further, when the power is back, the DRAM data has been restored from the NAND flash. Moreover, fast access to storage benefits associated with this non-volatile memory help enterprises improves the performance of their next-generation storage and server platforms. As a result, it is further expected to fuel the adoption of non-volatile dual in-line memory modules for enterprise storage applications in the next seven years.

With the evolution of next-generation 5G technology, the demand for high-performance computing is growing substantially across the globe. In addition, the growing deployment of 5G network infrastructure has surged the demand for edge computing at the customer’s premises. As a result, it is expected that there would be an increase in the implementation of small data centers near customers’ locations. To deliver improved performance to these data centers, several companies prefer to install NVDIMM over traditional RAM. Therefore, the rapidly building enterprise data centers across the globe are anticipated to augment the overall market growth over the forecast period.

The ongoing pandemic of COVID-19 is continually hampering the production and trade of several electronics and semiconductor products globally. This is attributed to the temporary shutdown of international borders as well as manufacturing facilities across key countries such as India, China, South Korea, and Japan, among others. As an effect, a notable decline in the non-volatile dual in-line memory sales and demand worldwide has been observed. Moreover, rising conflicts between two large economies, such as the imposition of heavy tariffs by the U.S. on several electronic products imported from China are further anticipated to hinder the market growth.

In terms of value, NVDIMM-N dominated the non-volatile dual in-line memory module market with a share of 72.5% in 2019. This high share is attributed to the product advantages such as high agility and low latency over NVDIMM-F memory. According to the JEDEC Solid State Technology Association, a standard body for the microelectronics industry, NVDIMM is mainly categorized into three types, including NVDIMM-N, NVDIMM-F, and NVDIMM-P. NVDIMM-N encompasses traditional dynamic RAM and flash memory in a single module. It delivers a latency of 10-8 seconds to restore the data during power loss in the system. On the other hand, due to high latency (10-5 seconds) and slower speed of NVDIMM-F have witnessed its slow adoption across developed nations such as U.S. and U.K.

The NVDIMM-N model has the limitations of the availability to store more than 32 GB capacity of information. To overcome this issue, key market players such as Intel Corporation and Samsung Electronics Co. Ltd. are planning to introduce NVDIMM-P to provide higher capacity and enhanced speed for storage applications. However, this category is presently unavailable in the market. It is expected to be launched by the end of 2020 in key nations such as the U.S. Additionally, by 2021, it is estimated to be available in other countries. These factors are expected to contribute to the segment growth over the forecast period.

In terms of value, the 16 GB segment dominated the market with a share exceeding 45% in 2019. This high share is attributable to the growing demand for the higher density of the NVDIMM-N model for faster processing than the earlier memory model. Key market players, such as Viking Technology Inc.; AgigA Tech, Inc.; and Micron Technology Inc. focus on producing 16 GB NVDIMM-N, which is anticipated to further contribute to the segment growth.

The 8 GB capacity segment accounted for a notable market share in 2019, due to high adoption and initial offerings by key players for the data center servers. The rising need to process larger data sets in enterprise data centers has surged the demand for a higher capacity of persistence memory. Leading market players are aiming at unveiling new types of hybrid non-volatile dual in-line memory modules with higher storage capacity. This higher capacity of persistence memory will help companies to improve the server’s performance and overall operational efficiency. This factor is expected to augment the 32GB segment growth over the forecast period.

In terms of value, the enterprise storage and server segment dominated the market with a share of more than 80% in 2019. This high share is attributed to the remarkable adoption of this non-volatile dual-in-line memory module for rapidly building data centers across the globe. Moreover, large businesses are aggressively migrating toward large-scale data centers to reduce overall infrastructure costs and achieve a high economy of scale. Thus, the growing businesses over cloud networks are expected to capture a considerable market share of the segment by 2027. 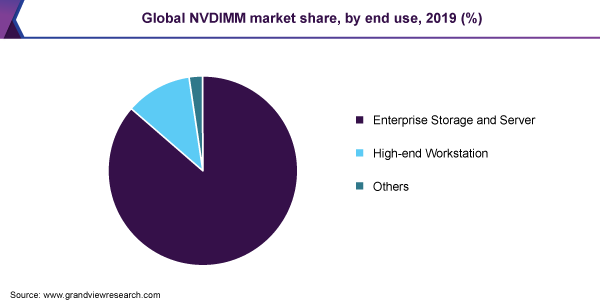 In addition, the data center storage capacity across the globe has showcased approximately 5X growth over the last five years. Also, the number of hyper-scale data centers has increased at a CAGR of exceeding 80% during the same period. Therefore, the growing consumer data bandwidth, along with the increasing number of hyper-scale data centers, is anticipated to grow the enterprise storage and server segment at the highest rate in the next seven coming years. Further, the rising need to enhance the performance of high-end workstations is estimated to fuel global market growth.

North America dominated the global market, with a revenue share of 37.6% in 2019. This significant share is attributed to the presence of a large number of leading players such as Viking Technology Inc.; Micron Technology Inc.; and Netlist, Inc. The presence of a massive number of data centers (around 1800) in the U.S. has increased the adoption of a non-volatile dual in-line memory module. Moreover, owing to the high technological adoption across large enterprises to boost the server and storage performance is estimated to witness substantial growth in the region.

Asia Pacific is anticipated to witness a robust CAGR over the forecast period. The presence of key electronic goods manufacturing countries such as China, South Korea, and Japan is estimated to drive regional market growth. Besides, in emerging countries like China and India, businesses are rapidly moving over to clouds to minimize the overall operational costs and increase their revenue. This has generated a massive demand for data centers in the region. Therefore, key cloud providers such as AWS and Oracle Corporation are investing a considerable amount in building their data centers in the Asia Pacific, stimulating market growth.

The NVDIMM market is highly consolidated, with five key players accounting for over 50% of the total revenue in 2019. Key players are significantly focused on establishing partnerships and agreements to develop new and innovative products. For instance, in November 2015, Netlist, Inc. made five years of a license agreement with Samsung Electronics Co., Ltd. to develop and manufacture NVDIMM-P memory. This module will be based on Samsung’s DRAM and NAND flash memory. Under this deal, Netlist, Inc. received USD 23 million from Samsung.

Moreover, leading players are increasingly targeting to introduce a new and high capacity product that helps these players to capture the maximum customer base and increase overall product portfolios. For instance, in 2017, Micron Technology Inc. launched a new model of NVDIMM-N with high storage density, i.e., 32GB. The memory is offering double the capacity of the existing memories i.e., 16GB. This memory helps to process more extensive data sets at a faster speed. Also, it will help increase data center performance in applications such as online transactions and data analytics. Some of the prominent players in the non-volatile dual in-line memory module market include:

This report forecasts revenue growth at the global, regional, and country levels and provides an analysis of the latest industry trends in each of the sub-segments from 2016 to 2027. For the purpose of this study, Grand View Research has segmented the global non-volatile dual in-line memory module market report based on the product, capacity, end use, and region: