The global nootropics market size was valued at USD 2.17 billion in 2018 and is expected to expand at a CAGR of 12.5% during the forecast period. Rising demand for brain booster and smart drugs is anticipated to drive the growth. A large number of students and professionals consume these smart drugs to improve focus and memory. Continuous product development using both synthetic and natural raw materials is projected to further fuel the demand.

Over the past few years, consumer preference has shifted toward natural nootropics such as caffeine, matcha tea, green tea, Kucha tea, spinach, beets, peanuts, eggs, liver, Brahmi, arctic root, turmeric, ginseng, pine bark, and fish oil. According to the American Council on Exercise (ACE), 50% of American consumers prefer buying products with natural ingredients. The rise in the vegan population in developed regions such as North America and Europe is expected to drive the demand for plant-based products. Nootropics manufacturers focus on natural ingredients to cater to the rising demand. For instance, in April 2019, Gaia Herbs launched new vegan supplements called Bacopa made using Bacopa; Nootropic Focus made with saffron, lemon balm, and spearmint; and Agile Mind made with Bacopa, ginkgo, and turmeric. 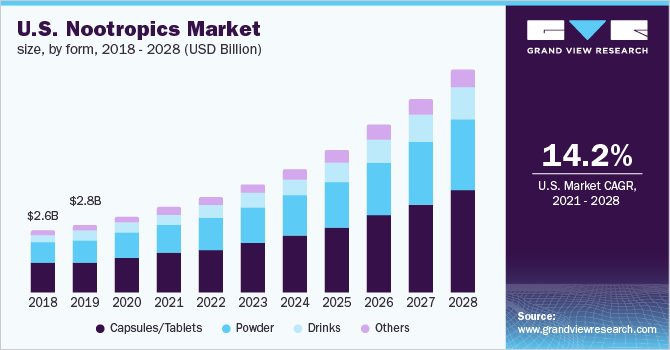 Rising demand for multi-utility drugs that work as antidepressants, energy booster, and anxiety resistant is expected to encourage R&D in the nootropics market. Increasing demand from the sports industry owing to their ability to enhance brainpower is expected to create growth opportunities for the key players. In early 2018, HVMN launched HVMN Ketone, which improves physical and cognitive and performance. It also ensures the endurance performance of professional sportspersons.

Nootropics manufacturers also emphasize on the product packaging. Plastic, glass, and metals are used for producing pouches, bottles, and cans. Packaging and labeling play important role in the marketing of the product as students and young professionals are the target consumers of the market. Furthermore, continuous innovation such as gums, new flavors, and use of natural ingredients is expected to increase the consumer base of the market.

Memory enhancement held the largest market share of over 30% in 2018. Increasing competition in academics has fueled the demand for nootropics among students. Preference for naturally derived nootropics over synthetic supplements is expected to create growth opportunities for the key players. Growing preference for smart drugs to cope with the stress of examinations is anticipated to further fuel the segment growth. A significant number of university students from Europe consume these supplements for better academic performance. Memory enhancement supplements are also gaining significant importance among the elderly population suffering from mild Alzheimer’s disease. The popular memory enhancement drugs include Adrafinil, Modafinil, Noopept, Phenylalanine, and Phosphatidylserine. 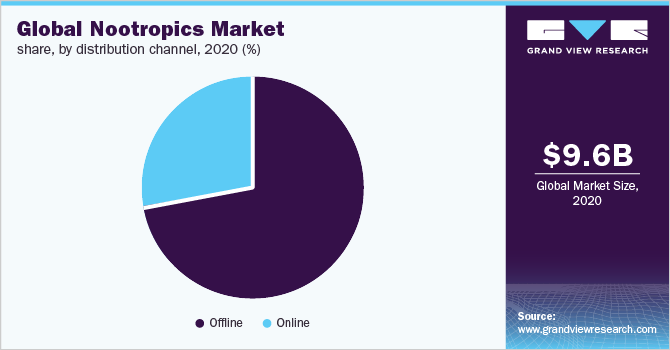 Over the past few years, smart drugs have gained significant demand as antidepressants. According to the World Health Organization (WHO), over 300 million people of all ages suffer from depression on a global scale. In the U.S., anxiety disorder is the most common mental illness. In 2018, around 40 million adult populations in the U.S. suffered from anxiety. Increasing awareness about mental illnesses is expected to widen the scope of application for nootropics in near future.

Attention and focus application are expected to register the fastest CAGR of 13.4% from 2019 to 2015, due to the rising number of the working population. Rapidly increasing participation in e-sports and gaming is also expected to boost the demand for nootropics. Smart drugs help the brain stay focused, which is the most important requirement for e-sports players. Koios, a Colorado-based nootropic beverage company, has been promoting its products in the e-sport industry by using professional players for advertisement and by sponsoring popular e-sports teams such as Impulse.

In 2018, North America held the leading market share of about 37% in terms of revenue. Around half of the adult population in the U.S. consumes vitamin supplements. The U.S. Food and Drug Administration (FDA) has classified the product as Generally Regarded As Safe (GRAS). The manufacturers target professional overachievers by using innovative packaging and products. High consumer awareness about brain health along with the presence of a large number of manufacturers is expected to bode well for regional growth.

Asia Pacific is expected to witness the fastest CAGR of more than 18% from 2019 to 2025. China dominates this region with a significant revenue share. Australia also has a significantly large market for nootropics. Modafinil and Piracetam are the most popular products in this nation. The multinational companies are collaborating with local players from China and India producing herbal and natural drugs. The rapid growth of the education sector along with increasing awareness about brain health in the developing countries including China, India, and Bangladesh, is expected to fuel the regional demand for nootropics in near future.

This report forecasts revenue growth at global, regional, and country levels, and provides an analysis of the latest industry trends in each of the sub-segments from 2015 to 2025. For this study, Grand View Research has segmented the global nootropics market report based on application, distribution channel, and region:

The Beauty and Personal Care (BPC) industry has witnessed a decline in the wake of the Covid 19 pandemic, but the impact is not as severe as seen in other industries. Although discretionary spending has reduced, the BPC market has witnessed a consumer behavioral shift towards safe and reliable products. Products that have a lower risk of contamination owing to automation and longer shelf lives helping the rationing of consumer supplies are expected to stand out in the near future. Brands are also focusing on improving their supply lines in terms of strengthening their E-commerce channel along with offering at-home wellness products, which are highly suited in this volatile business environment. Our team is diligently working towards accounting these factors in our report with the aim of providing you with the up-to-date, actionable market information and projections.