North America's chemical tanker shipping market size was valued at USD 259.2 billion in 2016. The increase in North American chemical export coupled with rising demand for plastic feedstock is projected to spur growth during the forecast period. The decrease in crude oil prices is allowing ship owners to operate on a better profit margin as bunkering cost is low.

Due to the low energy costs prevailing, there is a trend of increasing the capacity size and production size in North American petrochemical refineries.  A shift towards shale gas/oil refining in the current low-priced energy market is further favoring the increase in waterborne transport services in the North American region.

The growing trade of ethylene, methanol and paraxylene from Canada, Mexico, Belgium, and China is anticipated to boost the North American shipments industry. Significant demand for crude & vegetable oils and necessary chemicals from the U.S. and Mexico are some of the other factors influencing the global waterborne shipping business.

However, owing to high dollar exchange rates and chances of renegotiation of the NAFTA (North American Free Trade Agreement) can pose a threat to the sales dynamics of this region. As of 2017, the spot prices are estimated to be trending low due to stockpiling of chemicals which are hurting the freight charges of the marine transportation market. Speculations of an oversupply of tankers in this region are further promoting lower transportation costs resulting in weak growth in this sector.

A significant amount of chemical and crude oil exports occurs in Canada and Mexico. 8% of Canada’s manufacturing industry comes from the chemical sector. In 2015, the country’s chemical exports were estimated at USD 36.27 billion, and Mexico’s USD 10.47 billion. Owing to NAFTA, the U.S., Canada, and Mexico are contracted to have free trade with each other. As a result, a significant amount of trading occurs between the three nations.

The shipping industry is expected to be driven by innovation, capital, and operational efficiency. Innovative technological solutions such as coatings with enhanced cargo resistance and zero absorption properties are anticipated to optimize the ship’s earning potential. Tanker coating plays a key role in the shipping of chemicals on account of its dangerous nature and different properties.

Fleet operators are developing vessels with suitable coatings to avoid any damage to vessels resulting from major accidents. Also, appropriate surface type helps in maintaining the average age of the ships. Apart from the coating, the ships are now equipped with independent deck tanks for the transportation of hazardous goods.

Coastal trading in North America is expected to show continued growth as there is a rise in shipments from Mexico to nations in South America. Mexico has an existing free trade agreement with many countries in South America except Brazil. Mexico is an export hub for base chemicals and crude & vegetable oils required in various end-use industries.

International Maritime Organization has classified the cargo vessels into IMO I, IMO II, and IMO III based on the hazardous properties of products being transported. IMO I vessels are mainly specialized for carrying volatile substances. With the advancement in technology, IMO I tanker market volume is likely to increase on account of a new innovative solution for the carriage of such substances. 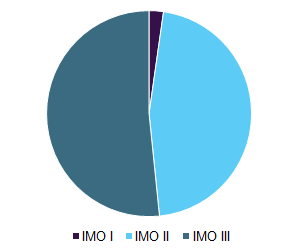 IMO III ships are expected to experience a rise in production owing to a surge in demand for crude oil from the U.S. and Canada. The number of contracts for IMO III ships is projected to increase as traders are using the ships to store unrefined petroleum, to sell it at a higher price in the future.

In terms of volume, the U.S. is expected to be the fastest-growing region in North America, owing to the increase in petrochemical refining and production resuming in shale oil sites. With China’s economic slowdown, the U.S. is now the largest supplier of plastic feedstock to the world, and a significant amount of ethylene is exported from the region.

Canada is one of the biggest oil producers and exporters in the world. Oil sand projects are increasing in size as companies such as Sinopec and Mocal Energy have increased their investments in Canada.  Global fuel exports from the country were valued at USD 77.51 billion in 2015. In 2015, the country produced crude oil on an average of 621,610 cubic meters per day. The U.S. accounted for approximately 35% of the export share in 2015.

According to the National Institute of Statistics and Geography (INEGI), the chemical industry accounted for 2.6% of Mexico’s GDP and 14.5% of the manufacturing GDP in 2012. Mexico’s geographic location enables the growth of its economy through trade. With coastal access to both the Atlantic and Pacific oceans, goods from Mexico can easily reach markets in the European and the Asia-Pacific region hence favoring the industry growth.

Companies operating in the North America chemical tanker shipping market are willing to invest huge amounts in adding a fleet of different sizes and types. Collaborations are also expected to act as one of the key initiatives used by companies also engaged in new vessels.

In December 2016, Stolt-Nielsen acquired the chemical tanker division of Jo Tankers, comprising 13 tankers worth USD 575 million This market is driven by freight rate wars and ownership of different vessel sizes as small-sized boats are not equipped to carry hazardous compounds of different weights.

In April 2017, Odfjell SE signed an agreement for two tankers having stainless steel tanks, with Hudong-Zhonghua Shipbuilding (Group) CO., LTD. in China. Some of the other companies involved in the industry include Alaska Tanker Company, Algoma Central Corporation., Rigel Shipping Canada, The CSL Group, Inc., Canfornav, Inc., Stolt-Nielsen, and Odfjell SE among others.

This report forecasts revenue growth at global, regional & country levels and provides an analysis of the industry trends in each of the sub-segments from 2014 to 2027. For this study, Grand View Research has segmented the North America Chemical Tanker Shipping Market based on product and region: