The North America legal cannabis market size was valued at USD 12.4 billion in 2021 and is projected to grow at a compound annual growth rate (CAGR) of 16.6% from 2022 to 2028. Growing legalization and the rising awareness about the health benefits of the consumption of cannabis are the major factors driving the market growth. In addition, the rising need for remedies for pain management among the patient population and an increasing number of patients suffering from chronic pain and other conditions in the region are also anticipated to fuel the market growth over the forecast period. The rising utilization of cannabis for medical as well as non-medical purposes is increasing in the North American region, thereby paving way for the growth of the market. 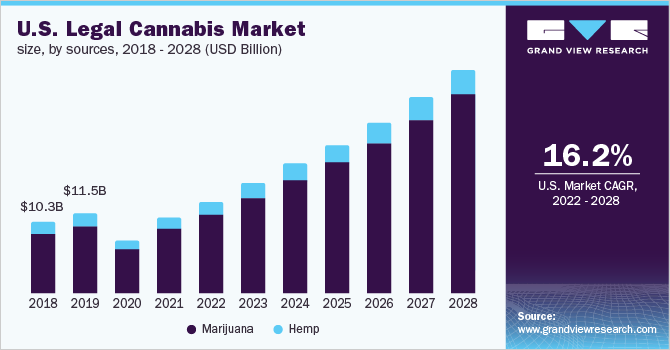 Furthermore, a positive consumer attitude and a growing number of companies entering the local markets of the North America region to cater to the growing demand are some of the other factors supporting the market growth. In addition, a dynamic startup scene in the region boosts the growth. For instance, according to an article published in TechCrunch, Jane Technologies, Inc., a U.S.-based company raised a Series C funding of around USD 100 million in 2021. Many other startups have gained huge funding opportunities in the region owing to the growing acceptance and demand for cannabis-based products. For instance, according to the 2020 Canadian Cannabis Survey (CCS), around 27% of respondents utilized cannabis in the past 12 months. This was an increase of around 25% as compared to the previous cycle. Furthermore, according to the same survey, around 22% of respondents reported utilizing a higher amount of cannabis during the COVID-19 pandemic as compared to utilization before the pandemic. In addition, around 56% of respondents reported utilizing the same amount of cannabis before as well as during the pandemic. Such studies and instances signify the rising adoption of cannabis products and their derivatives in the region.

In addition, the rising consumption of cannabinoid-based products, such as CBD, CBG, and others, has led to the increased penetration of cannabis in the region. Furthermore, affirmative reforms concerning CBD are among the major factors responsible for increasing the adoption of such end products across the region. For instance, according to the Gallup Survey, 2019, U.S. citizens between the ages of 18 and 29 years were considered to be most likely to use CBD and its derived products. Moreover, an increase in the adoption of consumer products, such as CBD-based edibles, beverages, and foods, etc. is another factor propelling the market growth.

The global pandemic has significantly impacted market growth. Stringent regulations on trade, imposition of lockdown in major countries of the region, and disruption in the supply chain are some of the key factors that affected the market. Canada is one of the major players supplying cannabis to various countries and the U.S. is also one of the prime countries providing cannabis-based products to other regions across the globe. Lockdown and transportation disruptions during the pandemic have led to an interruption in product supply, thereby leading to the widening of the supply-demand gap. This, in turn, affected not only the regional but also the global market.

Furthermore, developing government initiatives for curbing the illegal drug market in the region is anticipated to support the further legalization and adoption of cannabis-based products. For instance, in May 2021, the U.S. representative reintroduced the MORE (Marijuana Opportunity, Reinvestment, and Expungement) Act in the U.S. House of Representatives. If passed, the legislation would end the prohibition of cannabis by the federal government and would be beneficial in decriminalizing cannabis.

On the basis of source type, the market is segmented into hemp and marijuana. The marijuana segment is further classified into flower, oils, and tinctures. The marijuana segment dominated the market in 2021 with a revenue share of 85.5%, owing to the growing adoption of marijuana products along with the increasing legalization of medical marijuana. Furthermore, the high efficacy of marijuana-derived CBD is one of the pivotal factors for this segment’s large share. The segment is also anticipated to witness the fastest CAGR over the forecast period.

Changing perceptions toward marijuana-based products, along with developments in the regulatory frameworks of the countries in North America, are the prominent factors projected to support the market growth of the segment. In addition, the population in the region is not only utilizing marijuana for recreational purposes but also for medical purposes. This can be justified by a rising number of patients adopting marijuana-based medical products for certain medical conditions.

On the basis of derivatives, the CBD segment dominated the market with a share of 66.3% in 2021 due to the increased adoption of CBD for various medical purposes. In addition, affirmative clinical researches that prove its benefits for the treatment of medical conditions, such as chronic pain, epilepsy, cancer, and multiple sclerosis, and rising awareness among consumers about these benefits boost the segment growth. The others segment is anticipated to grow at the fastest CAGR during the forecast period.

This segment includes other derivatives present in the cannabis plant, such as minor cannabinoids, terpenes, and flavonoids. A rising number of research claiming the benefits of minor cannabinoids, such as CBC, CBG, CBDa, and others, is one of the significant factors propelling the market growth. In addition, a rise in the number of players providing minor cannabinoid & terpene products and growing awareness regarding the health benefits offered by them are expected to further fuel the segment growth during the forecast period.

On the basis of end-use, the market is broadly categorized into recreational, medical, and industrial. The recreational application segment held the largest revenue share of 48.3% in 2021 owing to the increased adoption of cannabis for recreational purposes. In addition, changing consumer behavior toward the use of cannabis is yet another factor boosting market growth. For instance, according to a CDC study in 2019, marijuana is one of the most commonly utilized illegal drugs at the federal level and around 18% of the U.S. population has used it at least once. 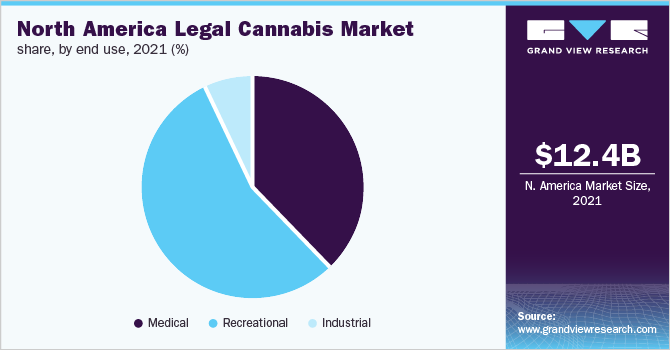 This segment is also anticipated to grow at the fastest CAGR during the forecast period. Canada and some states in the U.S. have legalized marijuana for recreational use; thus, favorable government initiatives coupled with rising adoption of cannabis for recreational purposes are expected to support the market growth. Furthermore, governments are aiming at curbing the illegal trade of the drug and affirmative initiatives for the same would be beneficial in increasing the recreational use of cannabis in the coming years.

The U.S. held the largest revenue share of 86.9% in 2021 and will continue to retain its leading position over the forecast years owing to the increasing legalization of medical marijuana and the liberalism of government regarding the same. Moreover, the introduction of the 2018 Farm Bill to legalize hemp and hemp-based products in the U.S. is a major factor boosting product penetration. The rising demand and affirmative consumer perceptions toward cannabis and derived products in the country are further fueling the market growth. Canada is projected to register the fastest growth during the forecast period.

Growing users and favorable government initiatives promoting the production, manufacture, and sale of cannabis-based products in Canada are the major factors that have led to a rise in the number of local players entering the dynamic market. Moreover, funding opportunities provided by major players in the country are expected to boost the growth of local as well as regional markets during the forecast period.

The growing demand is expected to favor the entry of several new players in the coming years. In addition, strategic developments in the form of mergers and acquisitions, partnerships, product launches, and collaborations are expected to boost the competition in the market. For instance, in 2021, the Canopy Growth Corp. launched SurityPro, their latest product line of CBD-infused products for dogs to support joint health & flexibility, healthy aging, calm behavior, and overall physical & mental well-being. Some of the key players in the North America legal cannabis market include:

This report forecasts revenue growth at regional and country levels and provides an analysis of the latest industry trends in each of the sub-segments from 2016 to 2028. For the purpose of this study, Grand View Research has segmented the North America legal cannabis market report on the basis of sources, derivatives, end-use, and region:

How big is the North America legal cannabis market?

What is the North America legal cannabis market growth?

b. The U.S. dominated the North America legal cannabis market with a share of 87.0% in 2021. This is attributable to the increasing legalization of medical marijuana and the liberalism of government regarding the same.

Who are the key players in North America legal cannabis market?

What are the factors driving the North America legal cannabis market?

b. Growing legalization and rising awareness with respect to health benefits provided by the consumption of cannabis are some of the major factors driving the growth of the North America legal cannabis market.