The global nutrigenomics market size was valued at USD 252.20 million in 2017 and is projected to expand at a CAGR of 16.48% during the forecast years. Increasing awareness among consumers along with the increased prevalence of obesity is expected to be a key factor driving the market. The growing trend of personalized diet among athletes is also likely to contribute to the market expansion.

The rising importance of nutritious food among the preventive measures for obesity and related ailments, various cardiovascular diseases, and malnutrition is also set to impel market growth in the years to come. Cancer research based on individual nutrition is being on rising as many scientists point out that diet regulation can reduce the susceptibility to cancer. 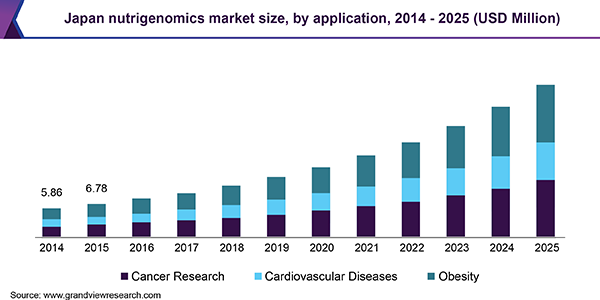 Thus, obesity and cancer research emerged as the prominent application segments in 2017 and are expected to maintain dominance over the forecast period.

Nutrigenomics helps build a bridge between genetics and their response to the diet taken. For instance, the development of lactose- and gluten-free food can be considered as changes made according to the specific gene variants that might result in lactose and gluten intolerance.

Several top manufacturers are shifting their focus on the development of tailor-made food to match a particular gene profile, such as strengthening of the weak immune system and decreased intake of cholesterol compounds. However, significant evidence is yet to be found to prove that it works.

A thorough study of the nutrigenomics market reveals that the highest revenue generated in the market through the application of cell culture is in the fields of manufacturing biopharmaceuticals followed by the production of vaccines. A very important factor contributing to this dominance is the fact that a mass culture of animal cells, especially mammalians, is an elementary step for the fabrication of biotechnological products, primarily viral vaccines.

Owing to the innovations in genetic engineering, there has been a significant increase in the usage of protein-based biopharmaceuticals. Their production is greatly dependent on the protein expression systems derived from mammalian nutrigenomics and the construction of high yielding cell lines. This recently developed application of nutrigenomics in the biopharmaceutical segment is responsible for most of the revenue generated from this segment and is expected to be the primary cause for the same throughout the forecast period.

North America accounted for the largest revenue share of the global market in 2017. The regional market will expand further over the coming years owing to the introduction and development of direct to consumer nutrigenomics kits and increasing intake of specialized food and diet in the region. A survey by a research entity in nine countries with 9000 individuals has stated that nutrigenomics has been recognized and people are ready to adopt this provided with a legal guarantee to avoid misusing the genetic data. 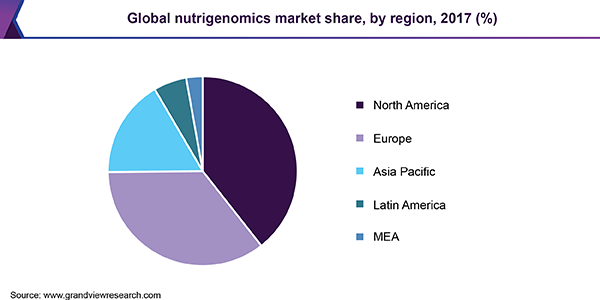 Asia Pacific region is also likely to witness considerable growth owing to the demand for functional foods and beverages, which has boosted the adoption of nutrigenomic techniques. Japan is the largest consumer of functional foods in this region and this is set to spur the regional market during the forecast years.

Major companies in the global market include Koninklijke DSM N.V. (Royal DSM); BASF SE; Danone; GeneSmart; Unilever; Genova Diagnostics; Inc.; Nutrigenomix, Inc.; Metagenics, Inc.; WellGen, Inc.; and Cell Logic. Most of these companies are focusing on mergers and collaborations with various research facilities for the development of ideal genetic tests. The development of better testing kits and its approval by regulatory bodies is the main hurdle for the manufacturers and these changes can help fuel the market in the future.

This report forecasts revenue and volume growth at global, regional, and country levels and provides an analysis of the latest industry trends in each of the sub-segments from 2014 to 2025. For this study, Grand View Research has segmented the global nutrigenomics market report based on application and region: