The global drill bits for oil and gas market size was estimated to be 2,835.0 hundred units in 2014. The high rate of fossil fuel extraction to meet the surging global energy demand has been a major factor driving the market growth over the past few years. Large-scale drilling and E&P in both onshore as well as offshore oilfields particularly in the Middle East and the U.S. in the past five years have led to the significant requirements for drill bits. 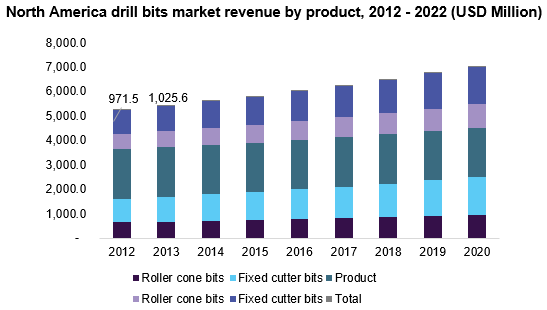 North America drill bits demand was 1,023.4 hundred units in 2014 and is anticipated to reach a hundred units by 2022, growing at an estimated CAGR of 5.2% from 2015 to 2022. Drill bits are one of the most essential oilfield equipment required for oil & gas extraction. These bits are fabricated from high performance metal composites, including tungsten carbide, high-speed steel, synthetic or natural diamond, and polycrystalline diamonds. In order to ensure high wear & tear-resistance and durability, these bits are further coated with specialty metallic coatings based on cobalt and titanium

Effective design and case-sensitive drill bits play a significant role in the drilling routine in a typical E&P project. Profound analysis of complex drilling parameters such as circulating medium, rock strength, drilling systems, and bottom hole environment, can lead to highly optimized operations. Effective selection of the type of bit to be used and in-depth material testing can lead to high-cost savings and hence increase overall profitability.

Increasing requirements for optimized drilling performance along with the growing concern of E&P companies to reduce operating costs owing to the recent slump in crude oil prices has forced the OEM manufacturers to improvise the bit designs. Companies such as Smith Bits have developed a rolling polycrystalline diamond cutter which increases overall performance and durability in extreme operating conditions.

Technological advancements along with changing customer preferences towards cost-effective equipment are estimated to create new opportunities for future development. Companies have been constantly involved in enhancing the drill bit expected life cycle along with designing hybrid extraction equipment.

Roller cone drill bits for oil & gas was the largest product segment accounting for 70.4% of market share in 2014 and is expected to reach a net worth of over USD 1,060.0 million by 2022. Roller cone segments are estimated to dominate the market owing to their low costs and suitability for soft and conventional formations. However, it’s expected to lose share to fixed cutters owing to increased explorations in unconventional plays and encountering hard rocks at greater depths.

Tricone or roller cone bits are further categorized as milled-tooth and tungsten carbide inserts. These products are configured to be used in soft formations more efficiently than other downhole tools. Recent innovations in developing sealed bearings would prevent corrosion of bearings and minimize failure risks. 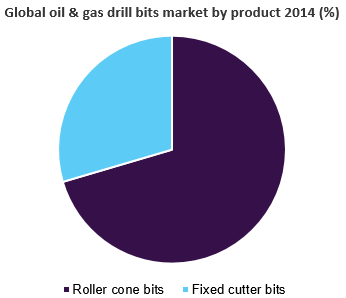 Fixed cutter drill bits demand was estimated to be over 320 hundred units in 2014 and is expected to grow at a CAGR of over 5.5% from 2015 to 2022. Drill bits with diamonds implanted in them are gaining significance owing to their increased resilience to extremely hard surfaces.

Fixed cone bits including PDC and natural/synthetic diamond cutters are relatively niche market segments and are expected to witness high growth over the forecast period. Natural/synthetic diamond cutters are estimated to offer the highest potential for industrial participants for future investments owing to superior durability and effective ROP obtained in complex formations.

Increasing PDC demand in shale and sandstone formations can be attributed to their high rate of penetration (ROP) and suitability for a diverse range of rock formations. Topography and geology play a major role in choosing the bit type for specific operations viz., exploration, and extraction. Its extended durability has let more number of PDC being used in the U.S. and Canada oil & gas E&P.

North America drill bit market dominated the global demand accounting for over 35% of total market volume share in 2014 and is expected to witness moderate growth over the forecast period. The dominance of the regional market can be attributed to increased shale gas drilling in the region.

The government of Italy in 2012 lifted the ban aiming at offshore drilling and exploration activities which is likely to have a positive impact on the market growth for drill bit. In 2015, the government of Italy renewed its agreement with Egypt aimed at investing funds for the development of the crude oil industry following the significant discovery of petroleum reserves in Nile Delta, Egypt. This agreement is expected to augment the domestic level production of crude oil for Egypt and thereby fuelling the market demand for drill bit industry

Increasing crude oil and natural gas demand along with large proven reserves in the Gulf of Mexico and Canada are expected to drive exploration projects in both offshore and onshore reserves. Surging exploratory activities in unconventional formations such as shale and CBM are expected to drive the requirement for durable and efficient drilling equipment and downhole tools. Oilfield directional drilling is further anticipated to drive the PDC bit demand over the forecast period.

For instance, Royal Dutch Shell announced that Appomattox Deepwater Project got Final Investment Decision (FID) confirmation for further development in the Gulf of Mexico which is expected to boost the growth of crude oil production. Hence the project will create new opportunities for drill bit as it is creating opportunities the exploration and drilling activities.

The Asia Pacific is anticipated to witness the fastest growth over the forecast period and is expected to reach a net demand of over 790 hundred units by 2022. Population growth coupled with increasing automotive industry growth is anticipated to spur oil consumption in the region.

Declining production in conventional oil fields is expected to drive the new reserves exploration and development. The high growth of the market in this region can be attributed to the increasing demand for oil products in China and India. China has invested in building new oil refineries in partnership with companies in the Middle East and Africa. Commissioning such projects in the Asia Pacific and the Middle East is expected to influence the oil product trade balance.

Global drill bits for the oil & gas industry are highly consolidated with the top five players accounting for over 70% of the market share in 2014. These companies compete on the basis of product differentiation and pioneering solutions. Some of the major companies are involved in forming strategic collaboration and acquiring small and regional players as part of their strategies to gain market share and sustain the existing competition.

Schlumberger was the industry leader with a market share of 22.5% of the total market revenue in 2014. The company offers a wide range of application-specific bits and is constantly involved in innovation to enhance the portfolio and maintain industry dominance.

Increasing requirements for optimized drilling performance along with the growing concern of E&P companies to reduce operating costs owing to the recent slump in crude oil prices has forced the OEM manufacturers to improvise the bit designs. Companies such as Smith Bits have developed rolling polycrystalline diamond cutter which increases overall performance and durability in extreme operating conditions.