The global oil spill management market size was worth 131.16 billion in 2015. Increasing safety concerns coupled with the rising figures of oil spill incidents globally over the last few years are expected to drive the global market over the next nine years. A significant increase in the onshore and offshore drilling activities has led to the growth in oil & gas transportation.

Growth in oil & gas transportation through tankers and pipelines along with tough government safety guidelines are anticipated to positively impact on global oil spill management industry. Major industry players are engaged in investing a huge amount in R&D. This is expected to build huge opportunities and result in industry expansion over the forecast period. 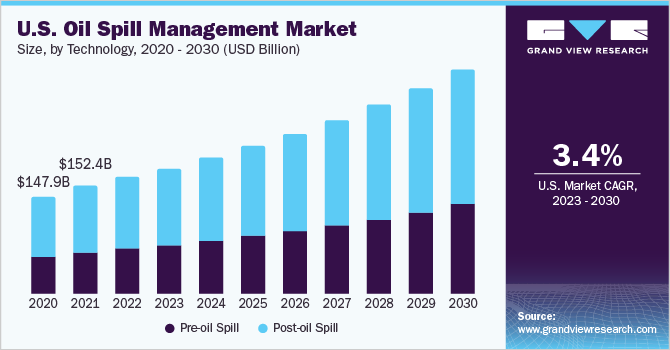 Globally numerous initiatives have been taken by governments & safety agencies such as Occupational Safety and Health Administration (OSHA), to control and monitor the leakages and oil spills at the source or during the transportation of oil & gas. Some of the key requirements include the installation of pipeline leak detection sensors and double hulling of transportation carriers. Growing concern and stringent safety norms towards preventing on-site and transportation occupational hazards in petroleum facilities are anticipated to remain the key factors contributing to the implementation of pre-oil spill management techniques over the forecast period.

Major oil spill offshore locations include the Gulf of Alaska in North America, the Gulf of Mexico, the North Sea in Europe, and the Persian Gulf in the Middle East. Rising onshore as well as offshore oil spill incidents are expected to drive the market over the next nine years. Major onshore areas include Russia, the U.S., Azerbaijan, Canada, Indonesia, Australia, Kuwait, Saudi Arabia, Libya, Iraq, Nigeria, Venezuela, and Angola.

Rising concern regarding harmful environmental impacts from hull-breach incidents has urged international organizations and governments to standardize the tanker design. In addition, it has also resulted in enhancing tanker protection against collisions and natural disasters. These factors are anticipated to boost the growth of double-hull technology over the next nine years.

Mechanical containment and recovery was the largest post-oil spill management response technique in the years, which accounted for over 61% of the total market in 2015. The method involves the use of Containment booms, sorbents, and skimmers for cleaning up an oil spill. These response techniques are the most useful practices for large-scale spills in near-shore and deep-sea areas. 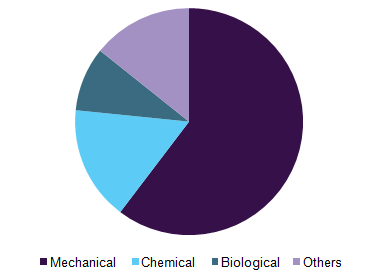 The Chemical oil-spill response technique accounted for around 19% of the market in 2015. The technique involves the usage of gelling and dispersant agents, which enhance the breakdown of oil components naturally. The chemical dispersants allow the water and oil to bound chemically. This results in the prevention of slick from spreading over the water surface and also increases the surface area of an oil molecule.

The biological recovery market was valued at USD 2.73 billion in 2015. Various biological agents used for oil spills break downs the oil into carbon dioxide and fatty acids. This recovery process is usually used for areas where spilled oil has reached the shore. However, recently this process has also been applied as test cases in river systems. Phosphorous and nitrogen-based fertilizers are used in the process. These fertilizers are dropped into the water bodies or areas to increase the growth of microorganisms, which break downs the sand-bound oil.

Offshore was the largest application for pre-oil spill management in the year 2015, accounting for over 71% of the overall total market. The rising requirement for oil-spill management technology in harsh environments, remote locations, and deepwater are anticipated to drive the product demand over the next nine years. Upcoming projects predominantly in the South China Sea & Persian Gulf region and renewal of abandoned wells are anticipated to drive offshore E&P activity over the foreseeable future.

Remote locations, for instance, arctic regions, coastal islands, and others are mainly dependent on the marine ecosystem for their economic growth. Increasing damage to seagrasses, feeding grounds and coral reefs of marine species owing to oil spills has a long-term impact on these coastal regions. Rising deepwater explorations along with increasing energy demand are anticipated to boost offshore prospects in arctic regions such as Alaska, Russian Federation, and Norway.

Onshore post-oil spill management accounted for over 68% of the market in 2015. Various incidents of good blowouts, and pipeline failures, especially in the U.S., Canada, Norway, China, & Mexico are the major attribute for the large market penetration over the past few years.

North America was the largest pre-oil spill management market in 2015. The region is anticipated to gain market share on the account of rising oil & gas E&P activities. Oil spill incidents in the region such as Marathon Oil, Exxon Valdez, and Deepwater Horizon have also resulted in the formulation of the stringent regulatory framework for onshore as well as offshore oil & gas production activities.

Asia Pacific pre-oil spill management market was worth USD 16.15 billion in the year 2015. The market in the region is expected to grow at an anticipated CAGR of 3.9% from 2016 to 2025. Presently, the majority of oil and gas exploration and production activities in the region are centered in India, China, and South Korea. Encouraging government initiatives and regulations for instance tax benefits and other financial aid for discovering hydrocarbon reserves is anticipated to push industry growth in these countries over the next nine years.

Some of the biggest oil spill incidents in the past few years include the Xingang Port spill in China (2010), the ExxonMobil spill in Nigeria (2010), and the Lac-Megantic derailment in Canada (2013), and the Trans-Israel pipeline (2014). Stringent environmental regulations coupled with large-scale spillage are the major factor responsible for the deployment of post-oil spill management techniques over the past few years.

This report forecasts revenue growth at global, regional & country levels and provides an analysis of the industry trends in each of the sub-segments from 2014 to 2025. For the purpose of this study, Grand View Research has segmented the global oil spill management market on the basis of technology, response technique, application, and region:

How big is the oil spill management market?

What is the oil spill management market growth?

b. North America dominated the oil spill management market with a share of 37.6% in 2019. This is attributable to rising oil & gas E&P activities and incidents in the region such as Marathon Oil, Exxon Valdez, and Deepwater Horizon have also resulted in the formulation of the stringent regulatory framework.

Who are the key players in oil spill management market?

What are the factors driving the oil spill management market?

b. Key factors that are driving the oil spill management market growth include increasing safety concerns coupled with the rising figure of oil spill incidents globally along with a significant increase in the onshore and offshore drilling activities has led to the growth in oil & gas transportation.