The global ophthalmic lasers market size was valued at over USD 1.0 billion in 2016 and is projected to witness lucrative growth over the forecast period. Rising prevalence of different types of chronic ophthalmic disorders is driving the growth of the market.

There is a growing prevalence of ophthalmic disorders such as cataract, glaucoma, refractive errors, Age-Related Macular Degeneration (AMD), diabetic retinopathy, and retinal disorders. National Center for Biotechnology Information (NCBI) stated that in 2013, the number of people suffering from glaucoma was estimated to be 64.3 million worldwide. Such a huge number of people with glaucoma throughout the world has resulted in extensive demand for these devices.

Based on a Journal of Ophthalmology, cataract is considered as one of the major causes of visual impairment and blindness across the globe. According to News-Medical.Net, in 2015, 22 million people aged 40 years and above got affected with cataract. Cataract removal surgeries are very common among the aging population. Hence, due to the aforementioned factors, the growth of the market is anticipated to propel in the near future.

Among the product segment, femtosecond lasers held the largest revenue share in 2016. This is due to the rising number of people affected by refractive errors. These devices are also increasingly used during cataract surgeries. Thus, due to the aforementioned factors, this product segment generated huge revenue in the market.

Growing technological advancements in the field of femtosecond lasers for cataract and refractive error surgeries have led to huge development of these products. Thus, newer technologies are motivating this segment to contribute to the immense market share.

SLT and YAG lasers are also expected to witness significant growth over the forecast period. These products are effectively used for the treatment of glaucoma, retina, and corneal surgery. Ellex Medical Lasers Limited, one of the leaders in the ophthalmic lasers industry, constitutes a broad portfolio of SLT and YAG for the treatment of such eye disorders.

On the basis of application, refractive error corrections dominated the ophthalmic lasers market in 2016 owing to the rising prevalence of refractive errors among both children and adult population. Moreover, increase in the application of femtosecond lasers in refractive error surgeries also supported the growth of the segment.

Cataract removal segment is expected to exhibit the fastest growth over the forecast period due to the growing number of cataract removal surgeries taking place across the globe. Cataract is a common problem among the geriatric population and might lead to blindness, if not given immediate medical attention.

Glaucoma is another important application segment, which is expected to generate significant demand for some ophthalmic laser types such as SLT and YAG. Lumenis launched a product, Smart Selecta Duet, which involves a combination of both of these laser technologies and is used for glaucoma treatment.

Retinal diseases such as diabetic retinopathy and AMD are a common concern for the geriatric population. The key players are focusing on the extensive production of ophthalmic products for the treatment of such kind of disorders. For instance, Topcon Corporation manufactured PASCAL Synthesis System for the treatment of patients with diabetic retinopathy and AMD.

On the basis of end-use, hospitals contributed towards the largest market share in 2016 due to the wide usage of ophthalmic lasers in hospital settings. Moreover, the rising number of hospitals in emerging countries is further supporting the growth of this segment.

Ophthalmic clinics are also projected to show growth over the forecast period due to increase in a number of specialty clinics for the treatment of chronic diseases. However, lack of availability of trained professionals for dealing with the complexities involved in the usage of ophthalmic lasers is expected to impede the market growth. 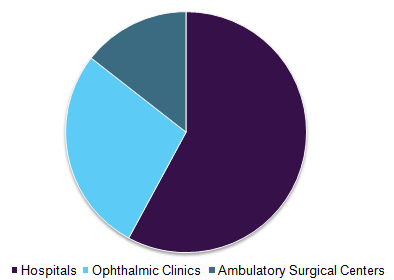 In 2016, North America dominated the market owing to rising healthcare expenditure in the U.S. and the development of sophisticated healthcare infrastructure in the country. Moreover, rising prevalence of ophthalmic disorders is expected to support the high demand for these products.

Europe also contributed towards significant shares in 2016 owing to the increasing geriatric population base in this region. Ophthalmic disorders are highly prevalent among this group of the population. As a result of these factors, Europe is expected to drive the market demand for the devices during the study period.

Asia Pacific is anticipated to show lucrative growth over the forecast period. This is due to the rising prevalence of cataract removal surgeries in the developing countries such as India. In addition, increasing awareness levels for the prevention of blindness is also motivating the high growth of the market.

The major strategies of the key players include mergers & acquisitions, new product development, and regional expansions. For instance, in 2015, Topcon Corporation redesigned Next Generation Pattern Scanning Laser PASCAL Synthesis with an automatic table, which helps in efficiency and space savings.

This report forecasts revenue growth at global, regional, & country levels and provides an analysis of the latest trends and opportunities in each of the sub-segments from 2014 to 2025. For the purpose of this study, Grand View Research has segmented the global ophthalmic lasers market on the basis of product, application, end-use, and region:

How big is the ophthalmic lasers market?

b. The global ophthalmic lasers market size was estimated at USD 1.1 billion in 2019 and is expected to reach USD 1.2 billion in 2020.

What is the ophthalmic lasers market growth?

Which segment accounted for the largest ophthalmic lasers market share?

b. North America dominated the ophthalmic lasers market with a share of 36.2% in 2019. This is attributable to presence of advanced healthcare infrastructure and growing prevalence of ophthalmic disorders.

Who are the key players in ophthalmic lasers market?

What are the factors driving the ophthalmic lasers market?

b. Key factors that are driving the market growth include rising prevalence of ophthalmic disorders, increasing geriatric population, and introduction of technologically advanced products.