The global optical film market size was valued at USD 23.21 billion in 2021 and is expected to grow at a compound annual growth rate (CAGR) of 8.7% from 2022 to 2030. Increasing demand for smartphones, tablets, and other electronic devices is projected to drive the growth of the industry during the forecast period. Rapid urbanization, resulting in changes in consumer lifestyles, is expected to propel the demand for electronic devices, which is projected to lead to an increase in product utilization. Furthermore, technological advancements in the field of portable and smart consumer devices, including smart televisions, and smartphones, are expected to propel the product demand over the forecast period. In addition, demand for multipurpose devices and an increasing number of companies are expected to fuel the industry in the coming years. 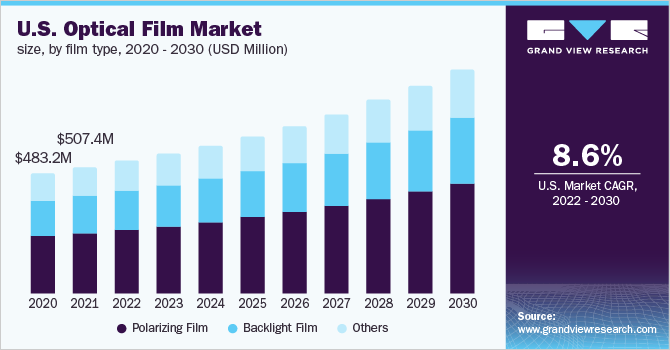 In addition, the keen interest of companies, such as Samsung, Apple, and Sony, in micro-LED display technology is expected to boost the market growth during the forecast period. However, volatile prices of raw materials are anticipated to hamper the overall industry growth during the forecast period. In addition, the outbreak of highly contagious COVID-19 across the globe is severely affecting manufacturing industries, which, in turn, is anticipated to negatively impact industry growth. Reducing discretionary spending owing to the increasing spending on essential items, such as food and medical products, supply & transportation limitation, and a slowdown in manufacturing activities due to the COVID-19 outbreak is expected to negatively impact the industry growth in the short-term.

On the basis of film type, the global industry has been further categorized into polarizing film, backlight film, and others. The polarizing film type segment dominated the global industry in 2021 and accounted for the maximum share of more than 47.50% of the overall revenue. The segment is projected to remain dominant throughout the forecast period expanding at the fastest growth rate. Increasing demand for polarizing films in a variety of applications, such as television, smartphones, automotive display, and others, owing to their high image quality liquid crystal display property, is expected to fuel the growth of this segment.

It converts non-polarized light to linearly polarized light by transmitting the incident beam that spreads in one direction and absorbs all other beams.The backlight film is a key component that offers the back-light source of the LCD, as LCD panel itself does not have luminous characteristics. Hence, it is necessary to add a light source to the LCD panel to display it. Moreover, LCD backlight film is composed of adhesive products, backlight, optical diaphragm, insulation products, plastic frame, and other components.

On the basis of applications, the global industry has been further divided into automotive displays, televisions, desktop & laptops, smartphones, tablets, and signage & advertising display boards. The smartphone application segment led the industry in 2021 and accounted for more than 35.50% share of the global revenue. The growing demand for consumer electronics, especially in Asia Pacific is further propelling the demand for optical films. Factors, such as rapid urbanization, expanding middle class, shifting spending priorities, and changing consumption patterns towards more discretionary spending are significantly driving the demand for consumer electronics, such as television, desktops& laptops, tablets, and smartphones. 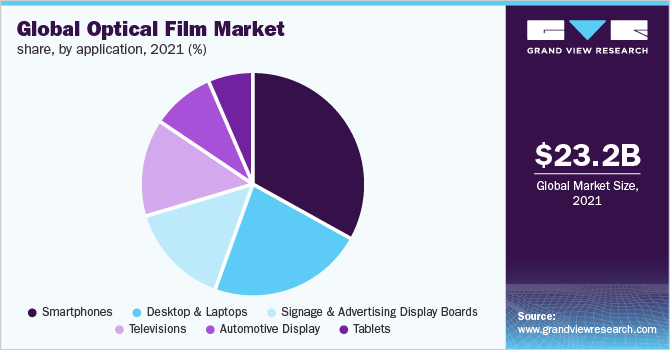 This, in turn, is projected to create substantial demand for the product. Increasing product acceptance in LCD and LED is further propelling the demand for optical films in the television application segment. In addition, rising demand for large displays, coupled with the increasing popularity of video walls are projected to fuel the growth of the television segment during the forecast period, thereby creating demand for optical films. Moreover, the rising adoption of laptops across educational institutions and corporate offices, owing to the online classes and work-from-home rules, is expected to positively influence the product demand in desktop & laptop applications.

Asia Pacific dominated the industryin 2021 and accounted for more than 53.00% share of the global revenue. This significant share is attributed to the presence of several end-users, such as Sony Corp., Samsung Electronics, LG Electronics, Panasonic Corp., and others, in the region. Over the past few years, the manufacturing industry in Asia Pacific has been attracting significant investments from leading MNCs. Companies from Northeast Asian countries, such as China, India, and Japan, are mainly engaged in pushing their economies to grow in key sectors pertaining to raw material extraction, manufacturing, and services. 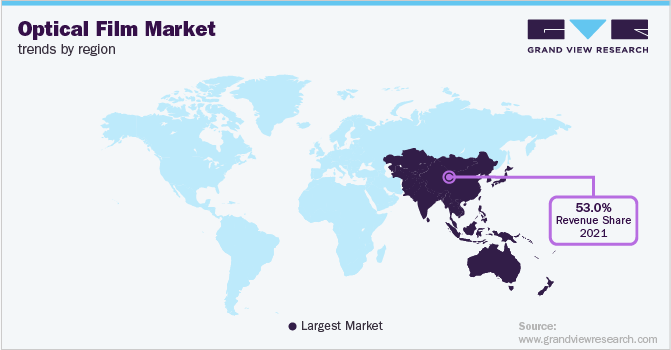 Thus, with the growing consumer electronics industry is driving the product demand in the region.Over the years, the government of India has implemented various national reform strategies, such as Make in India, Digital India, and 100% FDI, in electronic hardware manufacturing, which has boosted the growth of the electronic manufacturing industry. Moreover, the availability of cheap labor and proximity to raw material suppliers are further attracting the interest of investors in the region. China, Indonesia, South Korea, India, and Taiwan are expected to further drive the regional market growth over the forecast period.

The industry is characterized by the presence of several players, which are actively involved in adopting strategies targeted towards attaining sustainable transition, sales execution, and efficient pricing. Theseindustry players offer broad capabilities as well as capacities, which enables them to cater to diversified needs arising across multiple end-use industries. The major companies operating in the globaloptical film market include:

This report forecasts revenue growth at global, regional, and country levels and provides an analysis of the latest industry trends in each of the sub-segments from 2019 to 2030. For the purpose of this study, Grand View Research has segmented the global optical film market report on the basis of film type, application, and region: 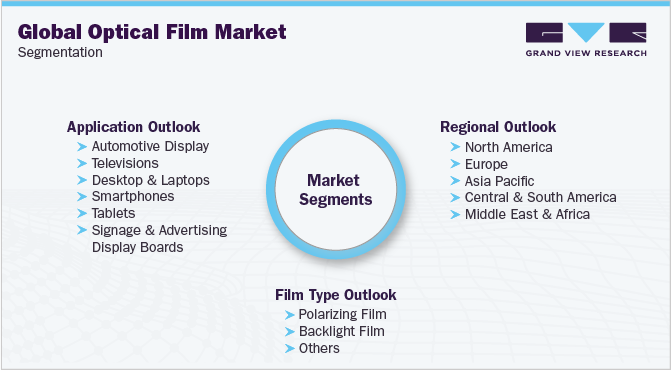 How big is the optical film market?

What is the optical film market growth?

b. The global optical film market is expected to witness a healthy growth rate of 8.7% from 2022 to 2030 and is anticipated to reach USD 48.35 billion by 2030. Improved readability, increased brightness, and excellent contrast is expected to augment the product demand in various application such as automotive display, television, desktop & laptops, smartphones, and others.

Which segment accounted for the largest optical film market share?

b. In 2021, polarizing film emerged as the largest segment with a market share of 47.6% in 2021, on accounts of growing automobile and consumer electronics industries in the region.

Who are the key players in optical film market?

What are the factors driving the optical film market?