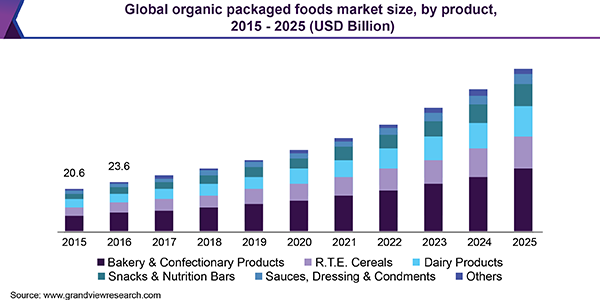 With the female workforce entering the corporate, the urban lifestyle has undergone a 360-degree change. According to World Bank Data, around 39% of the labor force across the world comprises women. The number has seen an upward trend in the last two decades, according to UN Women, as a result of the increasing number of working-class women. Thus, the busy modern work-life consumes a substantial part of the day, and thus leaves little or no time for the household chores, thereby enhancing the dependency on packaged food. A regular habit of eating boxed food among working-class professionals has propelled them to prefer organic packaged foods.

A shift in inclination among the urban population can be seen owing to the taste and health benefits. The urban population has been rapidly shifting from conventional food to organic packaged product forms. Various research studies have influenced the opinion of the consumers by exposing the adverse health outcomes of the consumption of products grown in chemical fertilizer.

The fact of the matter is that the millennials are ready to pay the premium price for organic packaged products in exchange for healthy food. One of the surveys has revealed that excellent taste will be the key reason behind the growing preference for organic packaged foods. Furthermore, a certain portion of urban society at the global level, which believes in maintaining an eco-friendly lifestyle by decreasing their carbon footprints, addressed that they prefer organic packaged products over conventional on account of being grown completely naturally.

Another factor propelling the growth of the market is the increasing number of organizations that offer organic packaged food products across the globe. For instance, Riverford, Amy’s Kitchen, and Eden Foods Inc. are some of them in the U.S. Similarly, Farm2Kitchen, Pride Of Cows, and Mygreenkart are few among many operating in the organic packaged food market in India.

It can be noticed that growing awareness and readiness to pay a premium price for organic packaged food has presented industrialists with a vast landscape of opportunities. Operating players with a unique selling proposition of being completely organic make sure to offer quality and convenience of the highest standard. For the same purpose, they prefer selling packaged goods online as well as offline mediums.

Bakery and confectionary products accounted for 39.3% share of the total revenue for the year 2018. Considering the market dynamics, it has been projected that a similar trend will continue to persist shortly as a result of changing the food preferences of the millennials towards consuming pre-packed organic brown bread. Furthermore, the development of a ground-breaking product with little or no trans-fat, consisting of multigrain and whole grain is providing impetus to the industry.

Over the past few years, organic packaged confectionaries have evolved to include therapeutic and dietetic product forms in their inventory, which has created a stream of traffic for more than serving beyond the purpose of taste. A variety of these products are available in the market and consumer preference for them often differs geographically owing to regulatory norms and local taste preferences. A rise in demand for low-calorie, sugar-free, and functional products has been noticed and is creating traction among health-conscious consumers at the global level.

Snacks and nutrition bars are expected to expand at the fastest CAGR of 15.1% from 2019 to 2025. Increasing awareness regarding the health benefits of healthy snacks including oatmeal and flaxseeds in mini-packaged forms is expected to have a strong impact on the segment growth over the next few years.

The offline channel accounted for the largest share of over 70.0% in 2018. Though a large part of the world has been interacting through the internet, yet Generation X prefers the routine of walking into a store to purchase the regulars over buying groceries online. Furthermore, increasing access to farm-grown local organic packaged food in the nearby supermarkets and convenience stores, which ensure freshness, is expected to remain a key trend in the market for organic packaged foods. 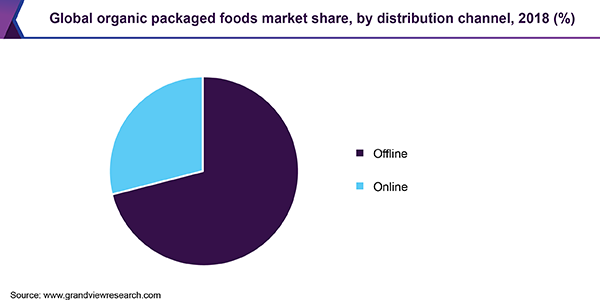 Furthermore, as the retail market is gradually moving towards the organized sector, the participating players are keen on focusing on certain products over creating an assortment of all. For instance, a fruit seller would prefer keeping hundreds of varieties of fruits to become a one-stop solution for fruits rather than assorting other different items.

Online channel for organic packaged foods is expected to expand at the fastest CAGR of 14.7% from 2019 to 2025. This growth is attributed to increasing investment by retailers at the global level in enhancing their grocery eCommerce capabilities. It has been concluded in several studies that generation Z relies on the online channel as it is considered to be a seamless, social, and easy shopping method.

Asia Pacific is projected to expand at the fastest CAGR of 18.5% from 2019 to 2025. Growing middle-class populations in countries including China, India, Thailand, and Bangladesh are expected to open new avenues over the next few years. Furthermore, the abundant availability of agro-farming lands in countries including China and India is expected to force industry participants to establish their strategic tie-ups in the vicinity.

Some of the key players are THE WHITEWAVE FOODS COMPANY; Hain Celestial; General Mills Inc.; and Sresta Natural Bioproducts Pvt. Ltd. Low entry barriers as a result of the presence of various brands and rapid innovation in the product line are anticipated to assert high competition among major manufacturers. Increasing demand for organic packaged products, along with attractiveness and low price provided by organizations including Walmart, is increasing competition among various players in the market. With a relatively fragmented competitive landscape, innovation and new product development are expected to remain the critical success factors over the projected period.

This report forecasts revenue growth at the global, regional, and country levels and provides an analysis of the latest industry trends in each of the sub-segments from 2015 to 2025. For this study, Grand View Research has segmented the global organic packaged foods market report based on the product, distribution channel, and region:

How big is the organic packaged foods market?

What is the organic packaged foods market growth?

b. Bakery & confectionery dominated the organic packaged foods market with a share of 39.2% in 2019. This is attributed to the changing food preferences of the millennial population towards consuming pre-packed organically-grown breads.

Who are the key players in organic packaged foods market?

What are the factors driving the organic packaged foods market?

b. Key factors that are driving the market growth include growing awareness among the urban population regarding the health benefits of organic packaged food products, along with increasing number of favorable recommendations by dietitians across the globe.