In addition, the increasing number of products launched and industry consolidation are expected to strengthen the market over the forecast period. For instance, in June 2015, Zimmer Holdings, Inc. completed the acquisition of Biomet, which in turn is anticipated to increase revenue consolidation and strengthen the company’s distribution channel.

Advancements in end-use technology and the introduction of new applications are anticipated to increase demand. For instance, Stryker introduced Simplex bone cement that is claimed to undergo less deformation post usage. Manufacturers have also introduced antibiotic-loaded cement that decreases the chances of post-surgical infections, especially in the case of total joint arthroplasty. Advancements in end-use technology are expected to increase the adoption of orthopedic bone cement amongst physicians.

On the basis of end-use, the market is segmented as hospitals, Ambulatory Surgical Centers (ASCs), and specialty clinics. The hospital segment emerged as a leading end-use category and accounted for over 47.7% of the total revenue in 2016. Large patient pool catered to by the hospitals and their dominance in the emerging and low-income countries is anticipated to drive demand. These are some of the key factors that can be attributed to its high revenue share in 2016. However, the shifting business trend from hospitals to ASCs & specialty clinics is likely to impede the growth of this segment over the forecast period.

The market is majorly dominated by the hospital segment; however, ASCs segment is expected to be the fastest growing owing to the growing number of ASCs in North America and Europe. The trend of growing multispecialty clinics is expected to increase the number of surgeries being performed by ASCs over the forecast period. 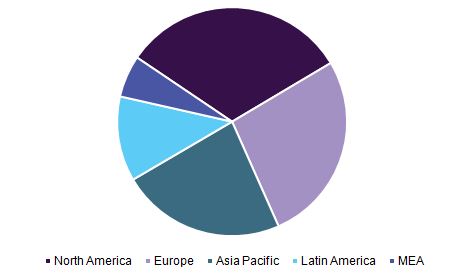 North America was the leading bone cement market in 2016, whereas emerging economies such as India, China, and Brazil are anticipated to exhibit strong growth. The increasing population and rising geriatric population are expected to increase demand for these surgeries and in turn, boost revenue growth of the global market.

The U.S. was the leading region in North America during 2016. It is also anticipated that the U.S. will hold the largest revenue share over the forecast period owing to the local presence of several key players with an established distribution channel. Favorable reimbursement policies for orthopedic surgical procedures in the U.S. are another factor responsible for the dominance of the U.S.

Asia Pacific market is expected to be the fastest-growing region in the coming few years. This region is anticipated to exhibit enormous growth due to growing medical tourism, increasing per capita income, surging healthcare spending by the government, and raising awareness. China's orthopedic bone cement market is anticipated to be the fastest-growing in the Asia Pacific region.

Europe region is anticipated to follow the Asia Pacific region with a CAGR of 5.5% between 2017 and 2025. Growing patient pool due to medical tourism and a strong distribution network of the manufacturers is expected to drive growth in Europe. Favorable healthcare policies can also be attributed to the growing demand over the forecast period.

The market is highly competitive and fairly concentrated, with few top companies accounting for the maximum share of the market in 2016. Some of the key participants include Stryker Corporation, Zimmer Biomet, DePuy Synthes, and Smith & Nephew, Inc.

Growing investments in R&D activities and expanding applications are expected to be key parameters for maintaining a competitive edge, with frequent partnerships being undertaken as an attempt to diversify end-use portfolios and gain market share.

This report forecasts revenue growth at global, regional, & country levels and provides an analysis of the industry trends in each of the sub-segments from 2014 to 2025. For the purpose of this study, Grand View Research has segmented the global orthopedic bone cement market on the basis of end-use and region: