The global palm methyl ester derivatives market size was estimated at 204 kilo tons in 2016. Increasing product demand from a wide range of end-use industries is the major factor expected to drive demand over the forecast period. Rising awareness regarding natural ingredients used in personal care and home care products is yet another factor expected to augment the demand for these products in the near future.

The products are used in a wide range of applications including soaps, detergents, lubricants, food & additives, and numerous personal care products. Currently, several key industry participants are moving toward utilizing palm-based raw materials for manufacturing various chemicals owing to a shift in consumer preference. These aspects are expected to positively influence companies in the development of numerous oleochemicals such as alcohols, glycerol, and other downstream chemicals.

Specialty downstream chemicals including methyl oleate, palmitate, and laureate have certain advantages such as excellent solvency properties, low toxicity, and biodegradability as compared to petroleum-derived substitutes. These advantages are expected to boost the demand for these products from various industries.

CPO, as the basic raw material, has several advantages over its substitutes. It is the most prolific oil-bearing species. When compared to soybean and rapeseed, the productivity of CPO per unit area is 10 and 5 times higher respectively. Furthermore, while considering comparative yields of all oil-bearing and producing crops, CPO production is considered to be the most efficient.

Its yield factor is sufficient to determine the vegetable oils that are expected to be produced extensively in order to meet the rising requirements for a cleaner and greener environment. Other advantages of manufacturing these chemicals from refined, bleached, and deodorized (RBD) PKO include low consumption of energy, easy distillation of fractionate, availability of cheap manufacturing equipment, and easy transportation of these products.

Favorable regulatory guidelines such as monetary incentives and tax benefits for bio-based chemical manufacturers are anticipated to influence product growth. Some of the key trends that the industry players are currently focusing on include increasing R&D spending and the development of new products, which are expected to augment product demand in the near future.

Moreover, the uninterrupted supply of raw materials, especially from countries, such as Indonesia and Malaysia which are the major global palm oil producers and exporters are expected to contribute significantly to sufficient production of methyl ester derivatives over the forecast period.

Crude palm oil (CPO) demand for manufacturing of the downstream chemicals was the largest in 2015 i.e. over 137 kilo tons. This segment is predominantly characterized by the easy availability of CPO. It is the basic raw oil product which can be obtained very easily through the extraction process.

Methyl Oleate held the largest share in the palm methyl ester derivatives market while generating revenue exceeding USD 133 million in 2016. The increasing use of the product as solvents in industrial cleaners, as surfactants in personal care products, as solvents & defamers in the production of inks and coatings and as a lubricant for metal cleaning & precision metal cleaning are expected to be the major factors driving the oleate demand over the forecast period.

Solvent & co-solvent was the largest application segment for methyl oleate in 2016 with revenues of around USD 35 million for the same period and is expected to follow a similar trend over the forecast period. It is used as solvents in a wide range of applications such as in the preparation of industrial cleaners, personal care products, and precision metal cleaning. However, soap and detergents are projected to be the fastest-growing application segment for the next eight years.

Methyl laurate is expected to be the fastest-growing product segment over the forecast period. The superior quality of the product compared to its substitutes and its rapidly increasing applications in metalworking fluids, textiles, and lubricants & greases are the major reasons considered to drive the product demand in the next eight years. The product found the largest application in the personal care & cosmetics industry with a demand of over 10 kilo tons in 2016 and is anticipated to grow at a CAGR of around 7.2% from 2017 to 2025. 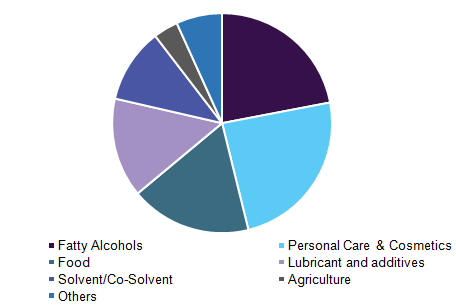 Some of its important applications include the formulation of fatty alcohols, sulphonated esters, emollients for green cosmetics, crop oil, oil carrier in agriculture, as additives in paints & inks, lubricants in metalworking fluids, the raw material for spin finishes, rubber processing agents, and as raw material for food emulsifiers.

Asia-Pacific was the largest consumer in 2016 and accounted for over 54% of the total revenue in the same year. Various factors such as high usage of these chemicals in paint & coating, automotive, and food industry are anticipated to be some of the major drivers of the market. Moreover, the trend of biodiesel in India owing to several initiatives by the Central Government is expected to boost market penetration.

Rapidly increasing demand from a wide range of industries, such as food and beverage, personal care, biodiesel, and lubricants, is the major factor that is currently driving the industry in Asia Pacific. Factors such as rising consumer health awareness and the need for a clean & green environment have led to a significant increase in investment in the palm oil industry since the last decade are anticipated to influence the market in the near future.

Moreover, the region experiences yet another vital advantage of uninterrupted supply and availability of low-cost raw materials. The majority of the global palm is cultivated in the Asia Pacific region, mainly in Malaysia and Indonesia. Hence, the majority of the industry players are concentrated in this region and export mainly to North America and Europe.

Asia Pacific was closely followed by Europe, which is expected to grow at a CAGR of 3.0% from 2017 to 2025. The North America industry is estimated to witness moderate growth over the next eight years to reach a net-worth exceeding USD 53 million by 2025.

The global industry includes several types of industry participants. These include the multinationals that are integrated throughout the entire value chain along with even SMEs and domestic manufacturers catering to small-scale/short-term requirements.

The leading participants in the industry are fully integrated from palm plantations or palm oil production (raw material) to derivatives production, marketing, supply & distribution, and even to finished product manufacturing where these chemicals find their specific applications.

Increasing consumer awareness regarding bio-based products is expected to boost these products demand in the near future. This is anticipated to attract a few new players over the forecast period. Some of the major existing players in the market include Peter Cremer North America, Carotino Group, KLK OLEO, Ecogreen Oleochemicals, and Kao Corporation.

This report forecasts volume and revenue growth at global, regional & country levels and provides an analysis of the industry trends in each of the sub-segments from 2014 to 2025. For the purpose of this report, Grand View Research has segmented the global palm methyl ester derivatives market on the basis of product, application, and region: