A number of imaging techniques such as CT scan, MRI, and ultrasound are used for diagnosis of the disease. Chemotherapy is the most common form of treatment provided by medical practitioners and oncologists. Currently, there are only four drugs approved by the U.S. FDA for the treatment of pancreatic cancer: ABRAXANE, (albumin-bound paclitaxel); Gemzar (gemcitabine); 5-FU (fluorouracil); and ONIVYDE (irinotecan liposome injection). Apart from these four drugs, FOLFIRINOX, a combination of three chemotherapy drugs (5-FU/leucovorin, irinotecan, and oxaliplatin) is commonly used in the treatment of metastatic pancreatic adenocarcinoma. Other emerging chemotherapies for advanced pancreatic cancer combined with agents already approved for use are being investigated in clinical trials. 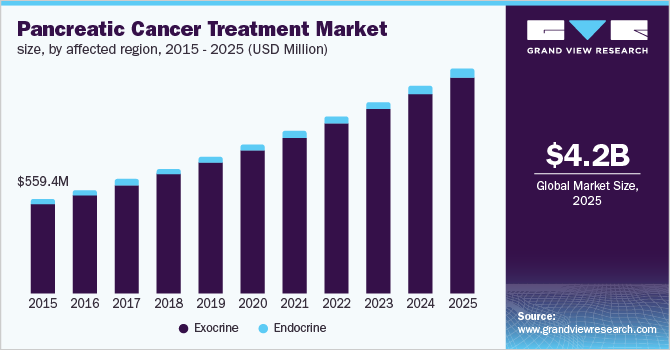 In developing countries, governments are continuously investing a huge amount of funds to improve patient-centered care. Increasing geriatric population base, rising prevalence of pancreatic cancer cases, and rapid growth in foreign investments are expected to be witnessed over the forecast period in the developing nations of Asia Pacific and Middle East region.

The global pancreatic cancer treatment industry has been segmented into the type of affected region and application. The affected region segment is categorized into exocrine and endocrine. Most of the pancreatic cancers diagnosed in the world belong to exocrine category, thus the segment currently dominates the market. The endocrine type of cancers, although less prevalent, is still awaiting effective treatment modalities.

The investment in R&D is significant in both types of cancers. However, the increasing prevalence and growing reach of novel techniques in the developing regions are the factors expected to drive the growth of the exocrine segment throughout the forecast period.

Based on type, the pancreatic cancer market is segmented into chemotherapy, targeted therapy, and others that mainly include surgery, radiation techniques, and other therapies. Targeted therapy dominated the market in 2015 and is expected to dominate throughout the forecast period.

The factors driving growth include introduction of the novel biologic therapies and targeted drugs in order to minimize the adverse effects of the existing therapies, including chemotherapy. Demand for targeted drugs is expected to rise significantly during the forecast period. 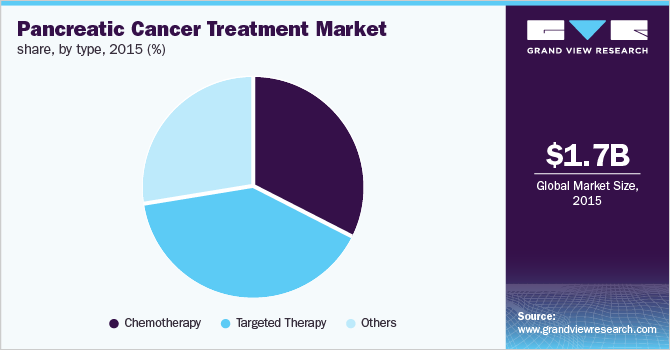 North America dominated the pancreatic cancer treatment industry with the largest revenue share in 2015. The dominance of this region is mainly attributed to the improved healthcare infrastructure, high adoption of pancreatic treatment procedures, and the presence of large target population. In addition, an increasing incidence of pancreatic cancer is aggressively propelling the demand for treatment options.

Numerous companies are focusing on the introduction of technologically advanced products in order to gain a foothold in the fast-developing medical devices sector. In addition, partnerships, collaborations, and mergers with well-established players are the major strategies deployed by top players to increase the market share during the forecast period.

This report forecasts revenue growth at global, regional, & country levels as well as provides an analysis on the latest trends and opportunities in each of the sub-segments from 2014 to 2025. For the purpose of this study, Grand View Research has segmented the Pancreatic Cancer Treatment Market on the basis of affected region, type, and region: