The global paroxysmal nocturnal hemoglobinuria (PNH) treatment market size was valued at USD 2.24 billion in 2017. It is expected to exhibit a CAGR of 11.2% during the forecast period. Increasing adoption of novel therapeutics, rising geriatric population, and the emergence of biologics are likely to be some of the primary growth stimulants for the market during the same period. 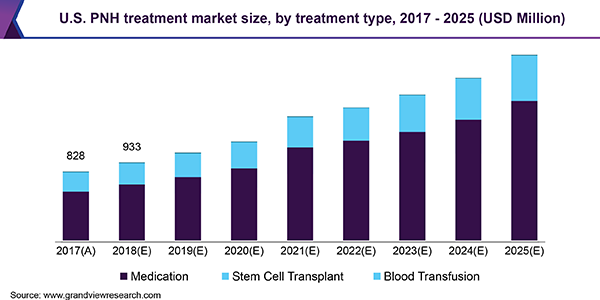 PNH is an ultra-rare chronic blood disorder that affects approximately 20,000 people worldwide. This life-threatening acquired disease can be characterized by three key manifestations, namely, persistent intravascular hemolysis, pancytopenia, and thrombosis. There are around 10,000 cases of PNH reported in North America and Europe with an incidence of more than 1.3 cases per million annually.

Treatment approach for PNH is rapidly evolving. It is being driven by the emergence of biologics that target causal hemolytic defect or abnormal hematopoietic stem cell. However, high cost of therapy and surgical procedures such as stem cell transplants (SCT), unfavorable reimbursement environment in developing regions, and adverse side effects of available treatments can impede the growth of the market during the forecast period. Additionally, stem cell transplants are not recommended for many patients since they are associated with significant morbidity and mortality.

Alexion Pharmaceuticals’ Soliris (eculizumab) is the first and only drug approved for the treatment of patients with PNH by reducing hemolysis. The monoclonal antibody improves anemia, decreases or terminates the need for blood transfusions, and reduces clotting of blood. Alexion reports remarkable improvement in patients on Soliris, with a three-year survival rate of about 98.0% in the first five years of diagnosis.

Currently, there are around 16 products in various stages of clinical development for the treatment of PNH, which includes promising drug candidates such as ALXN1210, Coversin, APL2, and RA101495. If clinically successful, they are poised to generate significant revenue and support the growth of the market.

Allogeneic stem cell transplantation is the only curative therapy for PNH patients. Clinical outcomes from various SCT programs demonstrate that this procedure is limited to a small number of patients suffering from similar rare disorders. Treatment with stem cell transplants is only recommended for severe cases of PNH with life-threatening complications such as transformation to leukemia or aplastic anemia. With the advent of Soliris, indications for SCT have changed.

Soliris is highly efficacious in the treatment of hemolysis associated PNH cases. The anti-complement monoclonal antibody, which works by targeting the CD5 complement component, was approved by the FDA in 2007. It dramatically reduces pain associated with symptoms, such as easy bleeding, abdominal pain, dark urine, weakness, and fatigue, improve the quality of life, and eliminates complications of PNH.

Blood transfusion was the only treatment option, which did not offer an adequate response, prior to the approval of Soliris. About 35.0% of patients died within five years of diagnosis, primarily as a result of lethal clots in vessels that supply to vital organs. Biologics and stem cell transplants are gaining penetration in developed countries. Among various classes of drugs, monoclonal antibodies are projected to exhibit strong growth in the global PNH treatment market, followed by recombinant proteins and cyclic peptides. Medications are estimated to register the fastest growth during the forecast period, followed by stem cell transplants and blood transfusions. Cell transplant and blood transfusion are anticipated to lose shares during the same period due to increased risks and sub-optimal outcome of these procedural approaches.

The market was dominated by the U.S. with more than 35.0% share in 2017. It is expected to retain its position in the market through 2025. Potential approval of promising pipeline drugs, high cost of treatment in the U.S., and increasing adoption of novel therapies are likely to contribute to the growth of the regional market. Japan is poised to post the highest CAGR during the forecast period. It holds over 10.0% share in the market in 2017, followed by Germany and the U.K. The seven major markets were at the forefront of the global arena, representing more than 85.0% of the overall revenue in 2017. 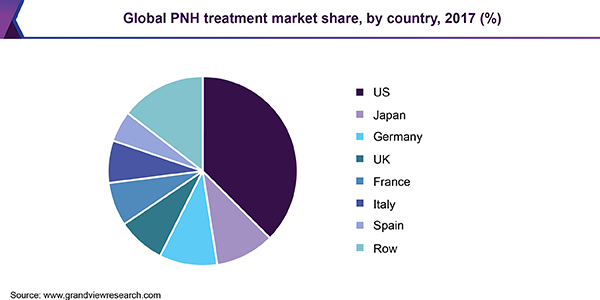 The rest of the World (RoW) is projected to experience noteworthy growth during the same period. This can be attributed to favorable legislation and increased adoption in some of the developed and developing countries including South Korea, China, Brazil, Australia, Canada, Mexico, the U.A.E., and Saudi Arabia. High drug cost and lack of reimbursement guidelines and policy frameworks are, however, anticipated to hamper growth prospects.

Late-stage pipeline products such as Akari’s Coversin and Apellis’ APL2 have demonstrated favorable clinical profiles and offer promise to gain meaningful share post their approvals. The market is expected to witness the launch of a biosimilar version of Soliris from Amgen (ABP959), CinnaGen, and ISU Abxis. Some other companies that are actively investing in the market are Novartis AG, Roche Holding AG, Morphosys AG, Amyndas Pharmaceuticals S.A., Celgene Corp, Generium, and Omeros Corporation.

This report forecasts revenue growth at global, regional, and country levels and provides an analysis of industry trends in each of the sub-segments from 2017 to 2025. For the purpose of this study, Grand View Research, Inc. has segmented the global paroxysmal nocturnal hemoglobinuria (PNH) treatment market report based on treatment and country:

How big is the paroxysmal nocturnal hemoglobinuria treatment market?

b. The global paroxysmal nocturnal hemoglobinuria (PNH) market size was estimated at USD 2.7 billion in 2019 and is expected to reach USD 3.0 billion in 2020.

What is the paroxysmal nocturnal hemoglobinuria treatment market growth?

b. Medication segment dominated the paroxysmal nocturnal hemoglobinuria (PNH) market with a share of 77.8% in 2019. This is attributable to the introduction of novel PNH therapies and increasing R&D activities by major players.

Who are the key players in paroxysmal nocturnal hemoglobinuria treatment market?

What are the factors driving the paroxysmal nocturnal hemoglobinuria treatment market?

b. Key factors that are driving the market growth include introduction of novel PNH therapies, robust pipeline, and increasing R&D investments.