The global pelvic floor electric stimulator market size was valued at USD 180.92 million in 2020. It is expected to expand at a compound annual growth rate (CAGR) of 11.5% from 2021 to 2028 to reach USD 427.15 million by 2028. The high prevalence of urinary incontinence, increasing awareness initiatives by various government and non-profit organizations, and the rising technological advancements, are the most significant growth drivers for this market. Factors such as the rising prevalence of neurodegenerative disorders, growing geriatric population, rising demand for home healthcare, and increasing use of medical sensors in various treatments are further expected to boost the market growth. The rapid rise in the geriatric population at higher risk of urinary incontinence is also one of the key factors responsible for the increasing demand for pelvic floor electric stimulators. 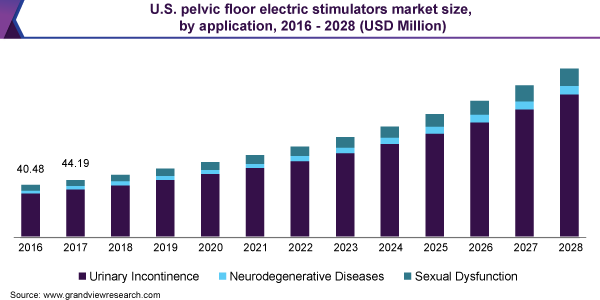 The pelvic floor electric stimulator provides neuromuscular electrical stimulation through the pelvic floor for strengthening pelvic floor muscles. It is delivered generally by anal or vaginal probes connected to an external pulse generator. The method of pelvic floor electric stimulation varies according to various parameters such as stimulus frequency (Hz), amplitude (mA) and stimulus intensity, number of treatment days in a week, length of each treatment session, location, and clinic or home settings. This device is recommended for patients suffering from urologic disorders, such as urinary retention, cystitis, benign prostatic hyperplasia, and kidney stones. Doctors majorly recommend this product to the patient suffering from urinary issues.

As per the American Society of Nephrology, urologic diseases are the third most common concern among the geriatric population, and these account for approximately around 47.0% of physician visits. Similarly, according to Phoenix Physical Therapy, 200 million people are affected by urinary incontinence worldwide. Moreover, the rising elderly population in the Asia Pacific region, especially in countries such as Japan, India, and China, is expected to drive the market during the forecast period. As per the estimations reported by the World Bank, in 2019, more than 28.0% of the population in Japan is over the age of 65 years. Thus, an increasing number of patients suffering from urinary incontinence is anticipated to surge the demand for pelvic floor electric stimulators, thus contributing to the market growth over the forecast period.

Furthermore, initiatives for increasing awareness by various government and nonprofit organizations are anticipated to boost the market growth. For instance, the Australian government has launched the Continence Aids Payment Scheme (CAPS). This scheme supports patients suffering from permanent or severe incontinence problems with their incontinence needs. They also launched National Continence Management Program which aims to raise awareness regarding various bowel and bladder health problems.

Additionally, professionals, such as urogynecologists, urologists, gynecologists, nurses, and other professional organizations have actively participated to promote awareness of continence in all care settings. For instance, the International Continence Society (ICS) established the Continence Promotion Committee (CPC) to promote education, services, and public awareness programs about incontinence across the world. Thus, a growing number of awareness programs, regarding urinary diseases and the rising prevalence of Urinary Incontinence (UI), by various government and non-profit organizations are some of the factors driving the market growth.

Countries such as the U.S. and Canada have witnessed a high prevalence of urinary incontinence among the elderly population. In this region, UI has a high prevalence rate and is discussed more openly in media, newspapers, and television commercials. According to the American Academy of Family Physicians (2016), more than 250,000 BPH-related surgical procedures are performed in the U.S. every year. This condition may occur due to trauma or injury to the penis, urethra, or bladder and is associated with pregnancy. Similarly, according to the Canadian Urological Association in 2017, bladder cancer is the fifth most common type of cancer in Canada. These factors are expected to boost the demand for pelvic floor electric stimulators in these countries.

The rising prevalence of hypertension and diabetes is one of the major factors for the increasing prevalence of urinary incontinence, which in turn is driving the market growth. According to the report published by the World Health Organization (WHO) in 2019, around 1.13 billion people worldwide have hypertension. Diabetes is the primary cause of advanced renal failure, followed by hypertension, which is estimated to affect around 1.0 billion individuals globally. Thus, an increasing number of patients suffering from end-stage renal diseases is anticipated to surge the demand for pelvic floor electric stimulators, thereby boosting market growth over the forecast period.

Based on application, the pelvic floor electric stimulator market is segmented into urinary incontinence, neurodegenerative diseases, and sexual dysfunction. The UI segment led the market with a share of 84.87% in 2020 owing to the increasing prevalence of stress and urge incontinence, and product launches by key players. Geriatric population, pregnant women are more prone to UI. According to a study published in NCBI, the prevalence of UI in pregnant women ranges from 32.00% to 64.00%. As per the Office on Women’s Health (U.S. Department of Health and Human Services), around 4 in 10 women get some type of UI during pregnancy. This is anticipated to trigger the growth of this segment.

However, the sexual dysfunction segment is expected to expand at the highest CAGR of 12.0% from 2021 to 2028. Products introduced by the top players in the market, increasing awareness about the treatment of sexual dysfunction through pelvic floor electric stimulator, and rising prevalence of sexual dysfunction are a few factors that may drive market growth in the future. For instance, according to the University of Wisconsin Foundation (School of Medicine and Public Health), around 5% of men above 40 years have Erectile Dysfunction (ED).

North America dominated the market with a revenue share of 39.29% in 2020. This dominance can be attributed to factors such as increasing incidence of neurodegenerative diseases, rising geriatric population, increasing prevalence of sexual dysfunction, and the presence of a large number of players in this region. According to the Parkinson’s Foundation, around 60,000 people in the U.S. are diagnosed with Parkinson’s disease every year. As per a report by the U.S. Census Bureau, around 78.0 million people will be 65 years older in 2035. According to the Alzheimer Society Canada, around 25,000 new cases of Alzheimer's disease are diagnosed every year and they are expected to increase up to 9, 37,000 in 2031. 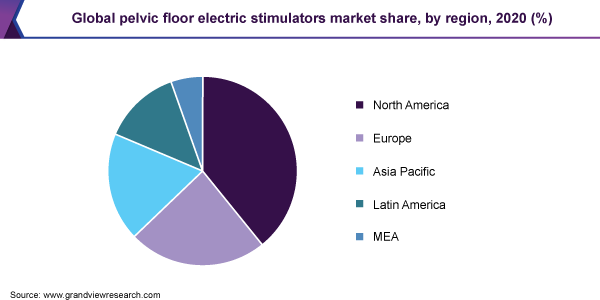 Asia Pacific is expected to significantly lead the market from 2021 to 2028 owing to various factors such as increasing government spending, increasing investment by key market players, and awareness programs by various organizations. For instance, in India, the Urological Society of India drafted guidelines for spreading awareness about urinary incontinence in India. Similarly, the Korean Incontinence Society, in South Korea, is working towards spreading awareness about urology issues related to the pelvic floor and lower urinary tract. Thus, these factors are expected to boost the growth of the market during the forecast period.

Some of the key players that dominated the global market in 2020 include Zynex Inc.; TensCare Ltd.; Verity Medical Ltd.; InControl Medical; The Prometheus Group; Laborie, Inc.; ActivLife Technologies; Athena Feminine Technologies; Atlantic Therapeutics; and Renovia Inc. The market players launch new products to strengthen their product portfolios and offer diverse technologically advanced and innovative products to their customers. It is the most prominently adopted strategy by companies for attracting more customers. For instance, in February 2018, Zynex introduced the NeuroMove which is intended to aid stroke survivors to regain movement using the brain’s ability to rewire itself—also known as neuroplasticity.

Several market players engage in mergers and acquisitions to strengthen their market position. This strategy enables companies to increase their capabilities, expand their product portfolios, and improve competencies. Players such as Laborie, Inc. and Athena Feminine Technologies, Inc. are using these strategies to gain more market share. For instance, in February 2020, Laborie acquired Clinical Innovations—a leading provider of medical devices for Labor & Delivery and Neonatal Intensive Care Unit specialties for an enterprise value of USD 525 million. Such strategies are expected to strengthen their foothold in the market globally. Some prominent players operating in the global pelvic floor electric stimulator market are:

This report forecasts revenue growth at the global, regional, and country levels and provides an analysis of the latest industry trends in each of the sub-segments from 2016 to 2028. For this study, Grand View Research has segmented the global pelvic floor electric stimulator market report based on application and region:

What are the factors driving the pelvic floor electric stimulator market?

b. Key factors that are driving the pelvic floor electric stimulator market growth include the increasing prevalence of urinary incontinence, technological advancements, and a rising number of patients suffering from overactive bladder.

How big is the pelvic floor electric stimulator market?

What is the pelvic floor electric stimulator market growth?

b. North America dominated the pelvic floor electric stimulator market with a share of 39.29% in 2020. This is attributable to increasing supportive government initiatives, favorable reimbursement policies, and increasing awareness about urinary incontinence in the general public in the region.

Who are the key players in the pelvic floor electric stimulator market?

b. The UI segment led the global pelvic floor electric stimulator market with a share of 84.87% in 2020.