The global peracetic acid market size exceeded USD 540 million in 2015. Growing usage of peracetic acid (PAA) as a sanitizer, disinfectant, and bleaching agent among key applications such as water treatment, food & beverages, and healthcare are expected to drive the market growth.

Key companies are using their resources such as R&D, sourcing channels to try to increase their footprint in developing regions. Also, private companies, with the help of government agencies, are trying to generalize usage of peracetic acid in applications such as water treatment.

It has been gaining a lot of interest owing to its ability to provide bacterial inactivation performance at a cheaper cost over other disinfection technologies. Peracetic acid is being used in food, beverage, pharmaceutical, and medical industries for many years. The oxidation potential of the same is higher as compared to other disinfectants and, thus, it is used in wastewater and water treatment.

Also, PAA does not produce halogenated DBPs, thus having a lower toxicity level as compared to chlorine. Their onsite usage also does not require special risk management plans as compared to certain toxic chemicals. These factors are expected to benefit global demand over the next nine years.

The concentrated peracetic form is considered to be hazardous and must be treated carefully owing to its corrosive nature. It may cause instant skin and eye burns on direct contact and is also prone to fire if the concentrate is allowed to soak in organic items, which primarily consist of rags, wood, or oily materials. However, regulations such as Globally Harmonized System of Classification and Labeling of Chemicals (GHS) have been prescribed to avoid potential hazards.

Food & beverages was the major application segment and the demand for it was 62.80-kilo ton in 2015. The effectiveness of peracetic acid in microbial contamination and development of application-based products are the primary contributors to this demand. Water treatment application segment demand is expected to grow at an anticipated CAGR of 8.0% over the forecast period. Government initiatives to inculcate peracetic acid to treat wastewater is expected to benefit demand growth. 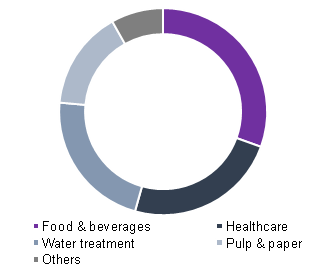 PAA finds widespread applications in water treatment. It does not decompose into environmentally harmful by products thus is being favored by government agencies such as EPA. Also, it is cost-effective as well as efficient as compared to other options such as sodium hypochlorite. All these factors are expected to benefit the demand from water applications over the next nine years

North American peracetic acid market demand was over 60-kilo tons in 2015 and is expected to grow at a moderate growth over the forecast period. Strong demand from the food & beverage sector in the region and increasing usage of PAA in water treatment are contributing to this demand.

This report forecasts volume & revenue growth and provides an analysis on the latest trends in each of the sub-segments from 2014 to 2025. For the purpose of this study, Grand View Research has segmented the peracetic acid market on the basis of applications and region: