The global pet furniture market size was valued at USD 2.1 billion in 2018. Increased availability of a wide range of multifunctional and fashionable furniture for pets on a global level is expected to remain favorable for the market. Furthermore, rising spending on pet care in developed economies, including Germany, U.K., and France, is projected to be a key market trend.

Consumer demand for innovative and fashionable pet accessories such as furniture is rising significantly. Over the past few years, furniture has evolved significantly across the world. Manufacturers in this industry are focusing on multi-functional and stylish product innovation, which can serve the requirement of pet owners. They have been following a design-driven approach, which can complement the home décor of the pet owner. The material of the products is also changing over the years. Manufacturers are using designer prints and premium fabrics, faux furs, and wickers for their products. Natural and environment-friendly raw materials such as jute and banana leaves are also gaining popularity among consumers. 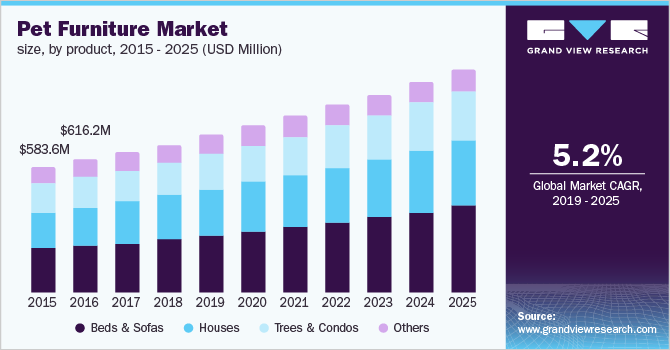 Spending on domestic animals has been rising significantly over the world. Owners are spending a significant amount on toys, clothing, beds, travel accessories, collars, leashes, bowls, medicine, gifts, grooming services, and veterinary services. The millennial population is increasing its spending relatively higher than other age groups. As of 2018, around 35.0% of owners belonged to the millennials age group on a global level. The rise in spending, along with the overwhelming passion of the millennials age group, is fueling the industry growth across the globe. Generally, domestic animals are treated like a family member, which encouraged the owners to spend more time on them.

Over the past few years, the trend of bringing and keeping pets in offices has been rising. These pet-friendly offices are also expected to raise the demand for the product in the near future. Increasing demand for multi-functional beds is another important trend, which has encouraged manufacturers to invest in such type of products. These multi-functional beds are designed to track the weight of the animal and simultaneously control the climate according to the pet’s comfort. In addition, some products can serve both the pet and the owner at the same time. This furniture combines pet bed and owner’s furniture including coffee table, bedside table, and chair, in a single product. Consumers, who have small space, are boosting the demand for such furniture product forms.

Beds and sofas held the largest market share of more than 35.0% in 2018. A range of beds and sofas are available in the industry, which is designed according to the weight, size, and shape of the user. Over the past few years, demand for temperature control and orthopedic beds has been rising notably due to their health benefit. Orthopedic beds offer support to backbone, muscles, and joints, and prevent joint problems. On the other hand, electrical heating beds are also available in both heavy padding and thin padding. Similarly, gel packs are included to keep the bed cool in summer. Donut beds, bolster beds, pillow or cushion beds, and outdoor cots are also gaining popularity over the years. Polypropylene, silica, and glycerin made beads are also used for decoration purposes. Growing cat adoption on a global level is driving the demand for trees and condos.

In 2018, the dog segment accounted for more than 40.0% share in the pet furniture market. U.S., China, Russia, Japan, Philippines, India, Argentina, and U.K. have the largest dog population in the world. As of 2018, more than 60 million households in the U.S. owned over 89 million dogs across the nation. Popular dog breeds in the U.S. and U.K. include pugs, bulldogs, and French bulldogs.

Cat furniture held a significant share in 2018. The major countries having the highest number of cats include the U.S., China, Russia, Brazil, France, Germany, U.K., and Italy. Around 45% of U.S. households own a cat and expenditure on these animals has been rising over the years. 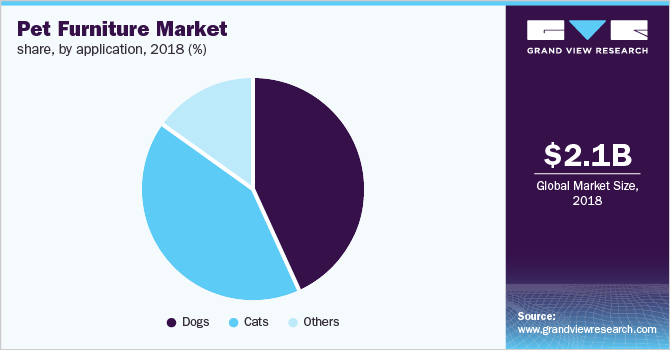 North America was the largest regional market, accounting for 40.0% share in 2018. Around 68% of the U.S. households owned a pet in 2017. Dogs and cats are the most popular among them, accounting for more than 80% of the domestic animal population in the nation. However, fish, birds, reptiles, and horses are also adopted in a significant number. Consumers own a combination of animals in the U.S. As of 2018, 46% of the household owns more than one pet in this nation. Among them, 32% household own combination of dogs and cats. Similarly, 11% own dogs and fish, 9% own cats and fish, and 7% own dogs and birds.

Over the past few years, the expenditure on this segment has been increasing significantly in this region. As of 2018, the expenditure on the domestic animal in this region was more than USD 72 billion. According to the American Veterinary Medical Association, the rural states of the U.S. have the highest ownership of domestic animals. These states include Wyoming, West Virginia, Nebraska, Vermont, Idaho, Indiana, Arkansas, Mississippi, Oklahoma, and Colorado.

Asia Pacific is the fastest-growing market, registering a CAGR of 6.4% from 2019 to 2025. India has the fastest-growing dog population in the world. Increasing per capita income in India has been allowing the consumers to spend more on luxury goods, such as pet furniture. China is another emerging market for the product. Beijing and Shanghai are the prominent markets of this economy. In Australia, 92% of cats and 76% of dogs are kept indoors, which implies a significant demand for pet furniture in this nation.

Key players in this industry include North American Pet Products; Go Pet Club; MidWest Homes For Pets; PetPals Group, Inc.; Ware Pet Products; Ultra Modern Pet; Inkgrid; and Inter IKEA Systems B.V. Over the past few years, online sales of the product have increased remarkably over the world. Therefore, manufacturers in this industry are emphasizing on e-commerce distribution channels. China and the U.S. have witnessed growth in online sales in recent years.

Over the past few years, players have also increased their spending on products made with natural and eco-friendly raw materials. For instance, in May 2018, Inter IKEA Systems B.V. launched a wide range of eco-friendly furniture and toys made with sisal, paper rope, and water hyacinth. They have used particleboard as a major raw material for cat furniture, which has a capacity of more than 40 lbs.

This report forecasts revenue growth at the global, regional, and country levels and provides an analysis on the latest industry trends and opportunities in each of the sub-segments from 2015 to 2025. For the purpose of this study, Grand View Research has segmented the global pet furniture market report on the basis of product, application, and region: