The global pet obesity management market size was valued at USD 626.99 million in 2018 and is expected to register a CAGR of 6.8% over the forecast period. Rising need to curb pet obesity, as obesity increases the risk of other chronic conditions, such as osteoarthritis and diabetes, is expected to provide growth platform to the market. According to an APOP report, in 2017, 56% of dogs and 60% of cats were overweight or obese in the U.S. 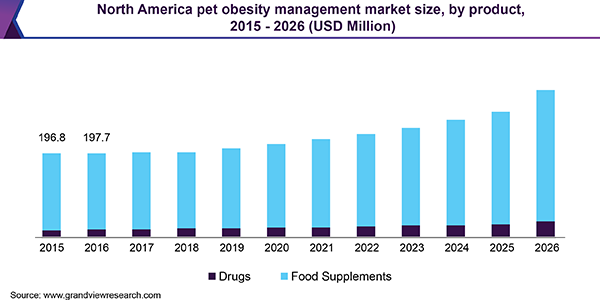 Moreover, growing pet adoption and increasing per capita income levels, especially in developing countries, are expected to accelerate the growth of this market. Rising cases of pet obesity-related diseases is further expected to boost the demand for obesity management in pets, thereby augmenting the market growth.

For instance, average treatment fee for arthritis, which is aggravated due to excessive weight, was USD 310.0 in 2016. Thus, rising concerns among pet owners to manage the excess weight of companion animals at the early stage is one of the major drivers for this market. Increasing number of companion ownership is also expected to fuel the market development in the years to come.

According to American Veterinary Medical Association (AVMA) pet ownership is on the rise in the U.S. with dogs animal type segment leading the market. It is highest in rural areas and lowest in urban states. For instance, according to a survey conducted by APPA in 2017, 85 million households in the U.S. had pets. Moreover, in 2017, the U.S. pet industry expenditure was estimated at USD 69.5 million.

Food supplements segment accounted for the largest market in 2018 due to the lack of branded pet drugs in the market. The segment will expand further as pet owners rely on food supplements and exercise than drugs for obesity management. Rising need for healthy, organic, and nutritious food products is anticipated to boost the segment growth further. With changing lifestyles, consumers are spending more on quality pet foods.

Increasing incidence of pet obesity and the resultant rise in the number of osteoarthritis cases is also boosting the demand for food supplements for weight management. According to a report by Kingsbrook Vets, 20% of all dogs, regardless of their ages, in the U.S. had osteoarthritis in 2017. On the contrary, Policies levied by Drug Price Control (DPCO) units prevent veterinary pharmaceutical companies from generating an investible surplus.

This results in entry barriers for new companies, thereby hindering the market growth. High demand for weight management programs where proper exercise and meals are prescribed by veterinarians will drive the segment further. The drugs segment is projected to expand at the highest CAGR from 2019 to 2026 as in some cases, drugs are also prescribed if the obesity is not manageable with exercise and meals. Some medicines, which are used as off-label, are Orlistat by Glaxo smith cline, Saxenda by Novo Nordisk, Belviq by Arena Pharmaceuticals, etc.

Dogs animal type segment accounted for the largest market share in 2018 due to increased animal healthcare spending, specifically in the developed regions. According to APPA, companion animal spending has been consistently on the rise and was valued at USD 72.56 billion in 2017. The cats segment is anticipated to witness the fastest growth throughout the forecast period due to high preference for cats over dogs. According to AAPA reports, around 47.1 households had cats in 2017 and around 59% of the cats in the U.S. were obese.

E-commerce segment is expected to lead the market over the forecast years due to easy availability of pet food supplements on online portals. Moreover, these portals offer products at discounted prices. Moreover, rising penetration of smartphones and internet providing accessibility to the remote locations in developing economies, such as India and China, are further anticipated to increase the usage of ecommerce platforms. 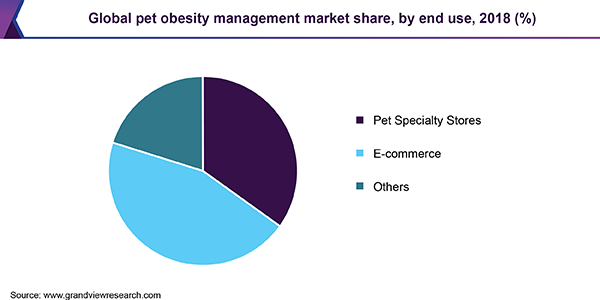 Some common websites offering pet food supplements and drugs include Amazon, BuyWow, and 1mg.The others segment includes hospitals and veterinary clinics. It is expected to witness the maximum growth rate from 2019 to 2026 due to increased number of pet clinic visits. Moreover, the availability of a wide range of treatments and surgeries in these facilities will drive segment further.

North America captured the largest market share in 2018. Almost, 25 to 30% of general canine population was suffering from obesity in the region. Rising pet ownership is expected to drive the regional market further. According to an AAPA report published in 2017, ~60.2 million U.S. households had at least one dog.

Favorable insurance policies are further anticipated to widen the scope for market growth. Moreover, rising concerns among pet owners regarding the associated risks of obesity is augmenting the demand for efficient weight management program, which is also projected to boost market. According to an AAPA report, the total expenditure of the pet industry was USD 69.4 billion in 2017 in the U.S.

Asia Pacific is expected to be the fastest-growing regional market over the forecast period. This growth is attributed to rising pet adoption in emerging economies like India, which is one of the most lucrative markets due to government efforts to improve veterinary healthcare facilities and various funding schemes delivered by the national as well as state governments. As per a report published in 2016 by Open Government Data Platform (Government of India), the country had 11,367 veterinary hospitals/polyclinics.

The industry is highly competitive and is marked by the presence of various small- and large-scale companies. Some of the prominent companies in the global market include Royal Canin; Hills Pet Nutrition, Inc.; and Pedigree. These companies focus on new product development and expansion of their distribution channels to capture a larger market share.

They are inclined toward maintaining strong competition by fulfilling unmet needs by delivering economic products. They are also consistently trying to boost their profits through mergers and acquisitions, geographical expansion, etc. For instance, in May 2018 Royal Canin partnered with Celebrity Alison Sweeny on their “Fight the Beg” capaign to address pet obesity.

This report forecasts revenue and volume growth at global, regional, and country levels and provides an analysis of the latest industry trends in each of the sub-segments from 2015 to 2026. For the purpose of this study, Grand View Research has segmented the global pet obesity management market report on the basis of product, animal type, end use, and region:

How big is the pet obesity management market?

What is the pet obesity management market growth?

b. North America dominated the pet obesity management market with a share of 31.87% in 2019. This is attributable to rising pet ownership and favorable insurance policies.

Who are the key players in pet obesity management market?

What are the factors driving the pet obesity management market?

b. Key factors that are driving the market growth include rising need to curb pet obesity, growing pet adoption, and increasing per capita income levels, especially in developing countries.