The global pharmacy automation devices market size was valued at USD 5.1 billion in 2021 and is projected to grow at a compound annual growth rate (CAGR) of 9.8% during the forecast period. Pharmacy automation devices with the help of analytics and software are changing the face of the retail pharmacy system across the globe. Automation has not only improved the efficiency of the industry several folds but has also made it more profitable. With the automation there is a marked decrease in the wastage of medicines, thus, per dose costs have decreased. It has also allowed pharmacists to manage workflow effortlessly, with an increased focus on patient satisfaction. The annual expenditure on medicines (prescription) and OTC drugs has been skyrocketing in recent years. 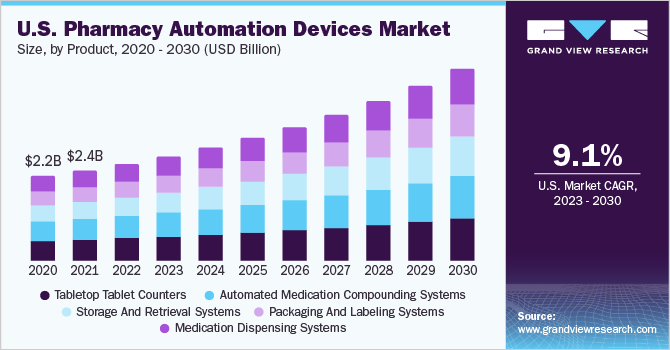 As per the American Academy of Actuaries, the annual expenditure on prescription drugs alone cost USD 3,337 billion in 2016, an astounding 17.9% of the GDP of the U.S. Another added cost comes in the form of wastage of medicines in pharmacies as well as healthcare systems. Automation in the retail pharmacy sector has been a boon for reducing costs in terms of wastage of medications, viable and expired. A study published by Reuters stated that in the U.S. wastage of cancer drugs (unused) resulted in USD 3 billion wastage, annually. A study published by OECD revealed that approximately 17,600 tonnes of expired or unused medicines were disposed-off in France, in 2018. The volume of medicine wastage has been constantly increasing.

In the same study, a staggering 32% of respondents in Germany reported flushing their liquid medicines and 10% of respondents reported doing that for the solid medicines as well. Technological advancements in the industry have led to marked reductions in managing inventory, a decrease in medication wastage, a reduction in cost per dose as well as better patient safety. The introduction of technologies, such as automated dispensing units or cabinets, tele-pharmacy, automated patient CRM outreach, drug monitoring programs, maintenance, medication reminders, and others, has contributed significantly to making the industry processes more streamlined as well as has resulted in a reduction in costs incurred due to wastage or wrong disposal of medicines.

Automation in the retail pharmacy sector has been around for quite some time; robotic dispensing can lead to an increase in prescription volumes and a reduction in costs incurred for staff training. The initial cost of installing automated systems might be high but it saves a lot more once the workflow is streamlined. For instance, a pharmacy owner in Colorado stated that his prescription volume increased by 50% due to the installation of the ScriptPro dispensing robot. Another pharmacy company's CEO reported that his prescription volume increased by 70% after the installation of the robot.

The COVID-19 pandemic has presented itself as an opportunity for the industry to flourish. Due to the government-imposed measures to curb the spread of the virus, robotic pharmacies were trending, there was a massive surge in prescription volumes and due to social distancing norms and shortage of staff, the automated systems and devices helped suffice the growing demand during the pandemic peak, the aforementioned factors have immensely contributed to the growth of the industry.

The medication dispensing system segment dominated the industry in 2021 and accounted for the largest share of more than 24.5% of the global revenue. The high share can be attributed to accuracy in dispensing of medicines and improved safety offered by these systems, which result in lesser incidences of wrong medications being dispensed to patients. It also helps in adept inventory management as well as helps reduce costs by managing storage. Wrong medications being dispensed to patients not only poses harm to their health but also have significant implications on costs incurred. A research article published in StatPearls reports nearly 9,000 people die each year due to errors in their medication, costs associated with medication errors in terms of patient management amounts to over USD 40 billion, annually.

The fastest growth is expected from the automated medication compounding systems segment over the forecasted period. This is due to the fact that even with a precise manual compounding system, it is prone to errors, which can have drastic effects on how the medications end up. An automated compounding system, thus, reduces or nullifies the chances of these errors in the mixing of medications. It also eradicates the chances of contamination by removing sources of contamination as the process is carried out in an aseptic chamber. The abovementioned factors are key drivers for the market.

Based on end-uses, the industry has been further bifurcated into hospital and retail pharmacies. The largest share of the global industry in the end-use segment was held by the retail pharmacy section. The segment accounted for a share of 52.4% in 2021. This can be attributed to an increase in the number of retail pharmacies across countries. Automation in retail pharmacies is bringing about a revolution in the reduction of costs at multiple levels. The OECD library states that the number of pharmacies has increased across all the OECD companies. Japan had the highest density for the period 2000-2019 due to increased government efforts. 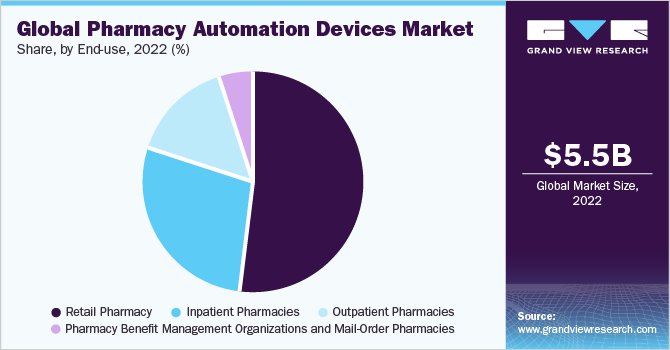 In Canada, in 2019, 75% of pharmacists worked in the community or retail pharmacies while only 25% of them worked in healthcare settings. The fastest growth has been observed in the hospital pharmacy segment. This is due to the increase in the need to minimize medication dispensing errors in hospitals and clinic settings. In addition, automation also allows easy management of the workflow and is more efficient than its human counterparts. Another aspect is a reduction in medicine wastage by managing the inventory for these hospital pharmacies. All these factors have led to the high growth of the segment.

North America dominated the industry in 2021 and accounted for the maximum share of more than 54.5% of the overall revenue. The developed healthcare system, advancements in patient management as well as hospital management systems are some of the key drivers of the growth of the region. An article published in Drug Store News stated that 48% of the pharmacists, as well as 66% of the prescribers, stated they saw an increase in the use of automation and other technology in the last year and a half. Many technology providers are also stating that pharmacy automation, as well as the adoption of technology, is the future and the growth has been fuelled by the COVID-19 pandemic. Furthermore, the presence of major pharmacy chains and large patient volumes has been driving the growth of the regional market. The need to minimize wastage of medicines as well as to cut down costs has also been pushing the region’s growth. 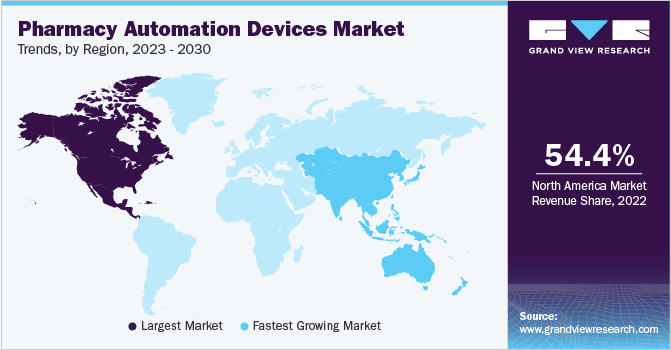 AsiaPacific is expected to register the fastest CAGR during the forecast period. This growth can be attributed to the rising geriatric population in need of medication for chronic conditions. The need for reduction in costs of medicines, medication errors, and proper management of workflow in hospital pharmacies, as well as stand-alone units, have also contributed to the regional growth. This region has been presenting excellent growth opportunities for the industry owing to huge unmet needs in terms of advanced healthcare systems and management systems. According to the article published by Business Standard Private Ltd. in May 2019, India consistently outranked Singapore in terms of automation with 69% of Singaporeans and 76% of Indians that are willing to try new technologies and ways of working to be more efficient or productive.

The industry is mostly concentrated in the western region (Europe and North America), owing to which, it is highly segmented. It is mainly driven by mergers and acquisitions of small players by larger players and by strategic alliances between hospitals/pharmacies and software firms. In January 2021, AmerisourceBergen and Walgreens Boots Alliance entered into a strategic alliance. Walgreens Boots Alliance Healthcare Business was acquired by AmerisourceBergen, enabling it to increase its focus on growing the retail pharmacy business. Through this strategic partnership, the two companies are extending and expanding their commercial agreements. Some of the key players operating in the global pharmacy automation devices market are:

This report forecasts revenue growth at global, regional, and country levels and provides an analysis of the latest industry trends in each of the sub-segments from 2016 to 2030. For this study, Grand View Research, Inc. has segmented the global pharmacy automation devices market report based on product, end-use, and region: 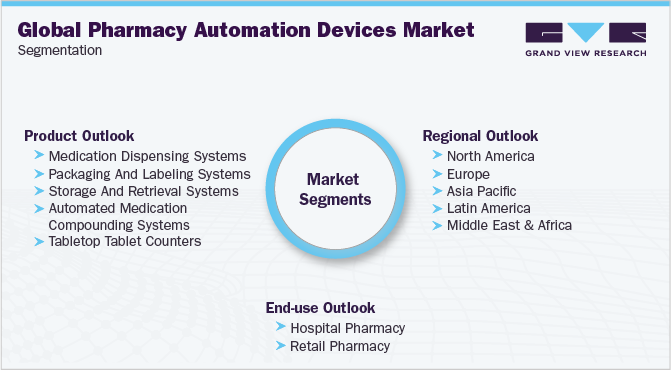 How big is the pharmacy automation devices market?

What is the pharmacy automation devices market growth?

b. North America dominated the pharmacy automation devices market with a market share of 54.6% in 2021. The developed healthcare system, advancements in patient management as well as hospital management systems are some of the key drivers for the growth of the market.

Who are the key players in the pharmacy automation devices market?

What are the factors driving the pharmacy automation devices market?

b. Key factors that are driving the pharmacy automation devices market growth include needing to reduce medicine wastage as well as proper management of medications and prescriptions.