The global phototherapy equipment market size was valued at USD 368.8 million in 2021 and is anticipated to witness a compound annual growth rate (CAGR) of 3.95% during the forecast period. The rising prevalence of skin diseases is the key factor driving the market growth. For instance, according to the latest available data from the American Academy of Dermatology Association, 84.5 million Americans, i.e., around one in every four, are impacted by some kind of skin disease. 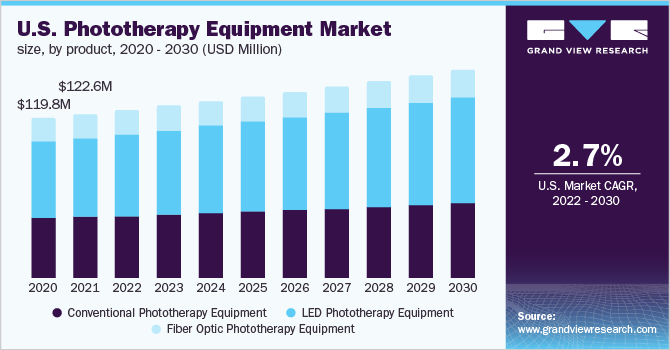 Phototherapy treatment is also very useful for treating neonatal jaundice. In this treatment, the neonates are exposed to fluorescent light, which helps them recover at a faster rate. The occurrence of jaundice among newborns is common; however, if it persists for long, then doctors use phototherapy devices for treatment.  As per a Pediatric Medicine Journal, the incidence of jaundice in newborns has been reported to be between 60% to more than 90%. Similarly, according to the National Health Service, it is estimated that six in every ten babies develop jaundice, whereas eight out of ten babies born prematurely are at risk of suffering from jaundice.

Additionally, with the rising newborn population, the demand for phototherapy equipment devices is anticipated to impel. For instance, as per the Centers for Disease Control and Prevention, the number of births in 2021 increased in the U.S. for the first time in the past seven years. The report shows that there was a 1% rise in births in 2021, with 3,659,289 births. Thus, this is expected to help the market grow during the forecast period.

This device has proved to be more energy-efficient, which lasts 10 times longer than the conventional devices, and is also comparatively cheaper. Research done by Stanford Medical Schools, one of the partners of D-Rev, has proved its efficient application in the treatment of jaundice therapy. Most phototherapy devices use compact fluorescent bulbs due to their uniformity and ease of use.

The COVID-19 pandemic had a slightly negative impact on the phototherapy equipment market. However, with various strategic initiatives taken up by market players, the phototherapy equipment market is estimated to progress in the post-COVID-19 pandemic period. Market players are involved in initiatives such as product launches, geographic expansions, and mergers & acquisitions. For instance, in December 2020, GlobalMed Technologies launched a home use product ‘Omnilux Contour’. Additionally, the company launched a new online store for all its products, which was expected to help the company gain some market share during and after the COVID-19 pandemic.

LED phototherapy equipment dominated the product segment with a market share of 48.2% in the year 2021. LED-based phototherapy is used to treat skin diseases and concerns such as fine lines, psoriasis, and acne. The rise in the number of people suffering from such skin conditions is expected to impel the use of LED-based phototherapy devices. For instance, according to MDALGORITHMS INC., 85% of people experience acne at some point in their life. Moreover, as per a similar source, 50 million people in the U.S. are anticipated to suffer from acne, out of which 15% of them suffer from acne which can result in scarring.

Additionally, research has shown that infrared light therapy can improve and reduce fine lines & wrinkles. The increasing number of people suffering from fine lines & wrinkles is expected to help the segment propel. For instance, according to Pushups, LLC, as a result of wrinkles and other skin-related issues, around 60% of Americans do not feel comfortable regarding their own skin. This may increase the use of LED-based phototherapy equipment, thereby impelling the segment growth in the forecast period.

The conventional phototherapy equipment segment is anticipated to advance at a considerable growth rate of 3.51% during the forecast duration. Conventional phototherapy equipment is used for the treatment of jaundice, as it helps in reducing bilirubin levels in neonates. The rising incidence of newborns suffering from jaundice is anticipated to help the segment propel during the forecast period. For instance, according to the March of Dimes Organization, around 3 in every 5 babies (around 60%) suffer from jaundice. Similarly, according to Medscape, it is estimated that 80% of pre-term babies are expected to develop jaundice within 2-4 days. Therefore, the increasing number of pre-term babies is further expected to help the segment's growth.

The skin disease application segment dominated the market with a share of 67.5% in 2021. This can be accredited to a rise in the number of various skin diseases such as acne, vitiligo, and others. For instance, according to the British Journal of Dermatology, it is estimated that there were 117.4 million incident cases and 231.2 million prevalent cases of acne in 2019, which is around a 48% increase when compared with the statistics from 1990.

Similarly, vitiligo, a condition in which the skin loses its pigment cells, is becoming dormant in various regions globally. For instance, according to ResearchGate, India is predicted to have an incidence rate of 8.8%, whereas, the same for Mexico was estimated to be 2.6 - 4%. As phototherapy has shown to stop/slow down the progression of vitiligo, its use is expected to increase. Hence, due to the above-mentioned factors, the phototherapy equipment market is estimated to expand during the projected period.

Moreover, there has been an increase in the number of births across the globe. For instance, according to Statistics Norway's quarterly population figure, in the first three months of 2021, 13,700 children were born, which was 700 more than what was observed in the first quarter of 2020. Therefore, as a result of the aforementioned factors, the segment is expected to witness a significant growth rate.

Moreover, as per a study conducted by NCBI, the prevalence of neonatal jaundice at a National District Hospital, Bloemfontein, was calculated to be 55.2%. Hence, owing to the aforementioned factors, the segment is anticipated to propel during the forecast period. 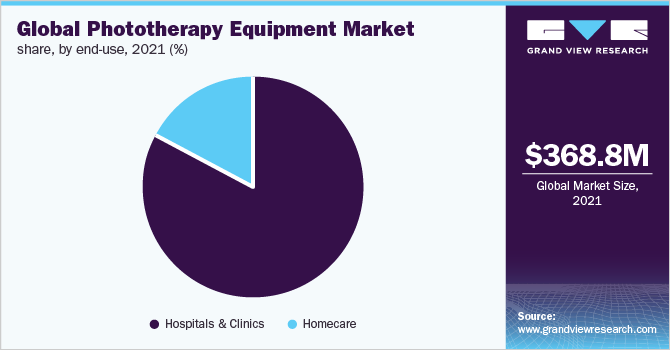 However, the homecare segment is projected to impel at the fastest CAGR of 5.09% in the forecast years. This can be credited to the availability of phototherapy equipment for homecare settings, and rising awareness about phototherapy equipment among the common population. Moreover, as per the National Psoriasis Foundation, treatment of psoriasis with a home UVB phototherapy can be convenient and economical. Similarly, according to The Royal Women’s Hospital, Australia, phototherapy is safe & convenient option to treat neonatal jaundice in a homecare setting. Hence, the segment is projected to experience lucrative growth in the forecast duration.

North America dominated the phototherapy equipment market with a revenue share of 39.3% in 2021. The rising number of various skin conditions such as vitiligo, psoriasis, eczema, and acne is expected to help the region dominate the phototherapy equipment market. For instance, according to the Canadian Dermatology Association, acne affects around 5.6 million people in Canada, i.e., 20% of the total population suffers from acne. Similarly, as per the latest estimates by Atopic Dermatitis in America, around 7.3% of U.S. adults suffer from eczema, while around 40% of the people suffer from moderate to severe symptoms. 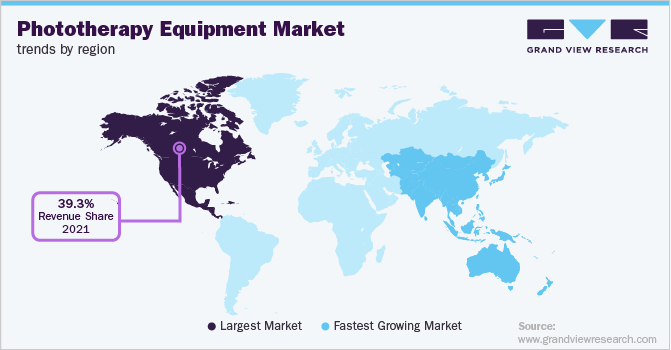 However, the Asia-Pacific region is projected to witness the fastest growth rate of 5.55% during the forecast period. The increase in the number of births of pre-term babies and a number of people suffering from skin disorders can be accredited to the high growth rate. For instance, as per The Lancet, around 85% of preterm births occur in the late preterm period, out of which 80% occur in Asia & South-Asian regions. Moreover, according to Narayan Health Organization, out of the 15 million pre-term births globally, 1/5th of these births take place in India alone. Additionally, people in the Asia Pacific are prone to acne, which is further expected to propel the use of phototherapy equipment. For instance, according to the Derma Health Institute, acne is a common condition for people of Asian ethnicity, thereby impelling the phototherapy equipment market in this region.

This report forecasts revenue growth at the global, regional, and country levels and provides an analysis of the latest industry trends in each of the sub-segments from 2018 to 2030. For this study, Grand View Research has segmented the global phototherapy equipment market report based on product, application, end-use, and region: 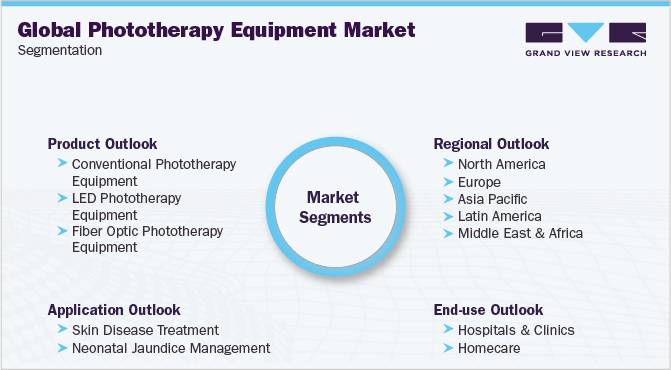 How big is the phototherapy equipment market?

What is the phototherapy equipment market growth?

Which segment accounted for the largest phototherapy equipment market share?

b. North America dominated the phototherapy equipment market with a share of 39.3% in 2021. This is attributable to the rising prevalence of acne-related problems and the huge adoption rate for technologically advanced skin care treatment devices.

Who are the key players in phototherapy equipment market?

What are the factors driving the phototherapy equipment market?

b. Key factors that are driving the phototherapy equipment market growth include the increasing prevalence of severe skin diseases, the introduction of technologically advanced products, and the rising prevalence of neonatal jaundice.