The global plastic dielectric films market size was valued at USD 1.13 billion in 2019 and is expected to register a compound annual growth rate (CAGR) of 3.6% over the forecast period. Rising demand from renewable energy systems is potentially driving the market growth. Plastic dielectric films are mainly utilized as insulators, which possess the ability to transmit a small amount of electrical energy at higher temperatures. Dielectric constant, as well as dissipation factor, are among the key factors, which determine the dielectric properties of a plastic film.

Polyethylene Terephthalate (PET) is likely to be the largest product segment in the coming years. A substantial portion of the revenue is expected to be generated through this segment. Plastic dielectric films are widely used in renewable energy systems, such as solar, wind, geothermal, and tidal energy, as they are lightweight and possess properties like refractory operating temperature, compact size, etc. 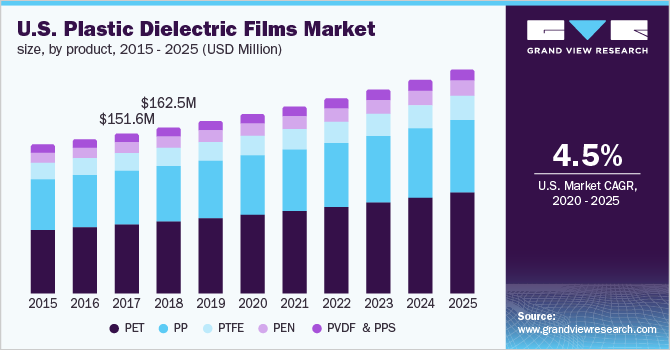 Rapidly growing solar market owing to increasing capacities is also expected to drive the market over the forecast period. Furthermore, favorable government initiatives in APAC and increasing investments in MEA are fueling market growth. According to REN21, the global renewable energy policy network managed by lean secretariat based at the United Nations Environment Programme (UNEP), Paris, France, the capacity of wind energy power generation reached around 11% of the global capacity and stood at 539 GW in 2017.

More than 90 countries including Brazil, Canada, Italy, Spain, India, and the U.S. have been operating in commercial wind power activity and have more than 1GW energy generation on average, at present. Strong growth in some of the largest markets, such as Germany, China, the U.S., the U.K., and India, is prominently driven by the significant changes in policies and regulations. However, fluctuating prices of raw materials are anticipated to have a negative impact on the global market.

Ethylene glycol, terephthalic acid, and plastic polymer resins, which are derive from crude oil, are the major raw materials used in the manufacturing of plastic dielectric films. Fluctuation in the prices of crude oil owing to various demand and supply aspects, natural disasters, and seasonal variations, has an impact on all its by-products, such as polyethylene terephthalate, polyvinylidene difluoride, etc. Political instability in oil-producing nations, such as Iraq and Saudi Arabia, has also resulted in extreme price fluctuations.

Asia Pacific has emerged as a significant demand contributor in the global plastic dielectric films market. The presence of major electrical & electronics manufacturing companies, such as Toshiba Corporation, Pegatron Corporation, Samsung Electronics, LG Electronics, Fujitsu Ltd, and Sony Corporation, among others, is propelling the demand for plastic dielectric films in this region. Companies from countries like Japan, China, and India among others, are mainly engaged in pushing their economies to develop in key sectors such as the extraction of raw material, manufacturing, and services. Thus, with the growing electrical and electronics industry, the demand for capacitors is also rising, which, in turn, is expected to drive the overall market of plastic dielectric films, as capacitors are utilized during the manufacturing of electronic products.

Over the years, the government of India has implemented various national reform strategies, such as Make in India, Digital India, and 100% FDI in electronic hardware manufacturing, which has boosted the growth of electronic manufacturing industry. Moreover, the availability of close proximity to raw material suppliers and cheap labor are further attracting the interests of investors in the region. China, Indonesia, South Korea, India, and Taiwan are expected to further drive the regional market growth over the forecast period.

Plastic dielectric films are prominently used in renewable energy systems such as wind, solar, geothermal, and tidal energy, among others. This can be attributed to the enhanced properties of plastic dielectric films such as lightweight, refractory operating temperature, compact size, and others. Growing momentum of solar market owing to the increasing solar capacities is expected to drive the market growth over the forecast period. Furthermore, the favorable government initiatives in Asia Pacific and increasing investments in the Middle East & Africa are fueling the market growth.

The share of wind energy power generation is stood at 11% of the total global power generation capacity and stood at 539 GW in 2017, according to REN21, the global renewable energy policy network based at United Nations Environment Programme (UNEP), Paris, France. At present more than 90 countries including Canada, Brazil, Italy, Spain, China, India, the U.S., Germany, and the UK, among others, are operating in commercial wind power activity and have a generation capacity of more than 1GW energy on average. Strong growth in some of the largest markets, such as Germany, China, the U.S., the UK, and India, among others, is prominently driven by the significant changes in policies and regulations.

Based on product, the plastic dielectric films market is segmented into PET, Polyethylene Naphthalate (PEN), Polytetrafluoroethylene (PTFE), Polypropylene (PP), and Polyphenylene Sulfide (PPS) & Polyvinylidene Difluoride (PVDF). Polyethylene terephthalate was the dominant product segment in 2018 and is expected to witness the fastest CAGR during the forecast period. Polyester possesses a comparatively higher dielectric constant as compared to Polypropylene (PP), which results in its demand in the production of small-sized capacitors. Capacitors made using PET films are cheaper and dissipate more power. They are mostly used in general applications, such as bypassing, decoupling, blocking, and various other noise suppression circuits. However, the properties of PET make these capacitors unsuitable for high-frequency AC applications. 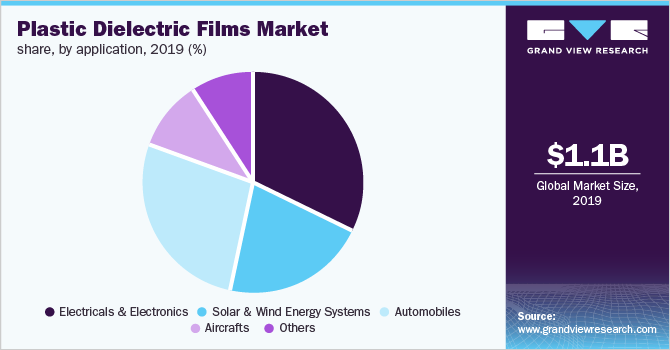 The product is witnessing an augmented demand, mainly from the electrical & electronics sector as it offers excellent dielectric strength, thermal stability, cut-through resistance, low shrinkage, excellent moisture resistance, high-temperature durability, and enhanced dielectric & handling characteristics for coating, die cutting, embossing, and laminating operations. In addition, it serves as a significant barrier for membrane touch switches and flexible circuits. However, the solar & wind energy system segment is likely to register the highest CAGR over the forecast period.

Asia Pacific was the dominant regional segment and accounted for 35.6% of the total revenue share in 2019. It is projected to expand further on account of rising product demand from the key industries including automobile, electrical & electronics, and solar & wind energy. China led the regional market, in terms of both volume and revenue. Rapidly expanding electrical & electronics industry, mainly in Southeast Asian countries including Vietnam, Indonesia, and Malaysia, is also driving the demand in the region.

Growing electrical & electronics industry, majorly in Southeast Asian countries including Vietnam, Indonesia, and Malaysia, is driving the demand for plastic dielectric films. Electrical & Electronics is the largest sector contributing to the economic growth of these countries. For instance, in 2017, the turnover of Vietnam exported electronics products was approximately USD 71 billion, which was USD 22.9 billion in 2012. This is attributed to large investments from multinational companies, especially from the Republic of Korea and Japan, in electronics sector.

Europe was the second largest revenue generating region in the global plastic dielectric films market. The market is majorly driven by rising demand from key application such as automotive, aircraft, and solar & wind energy systems. Growing adoption of renewable energy sources for power generation in European countries, such as Finland, Greece, Italy, Bulgaria, and Poland, is propelling the product demand. The region observed a rapid growth in installation of wind turbines in onshore & offshore and solar photovoltaic (PV) systems in the recent past. Furthermore, supportive regulatory and government initiatives to reduce global warming and greenhouse gas emissions are expected to provide lucrative growth opportunities in the coming years. 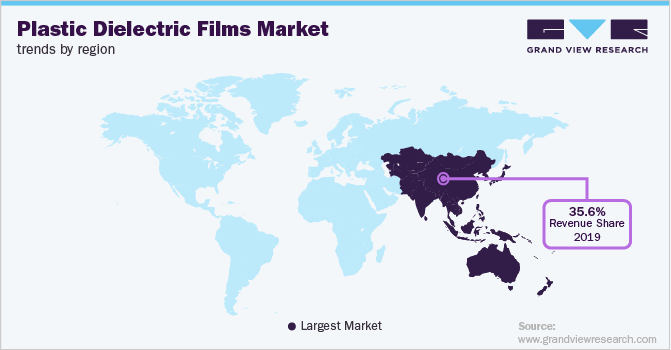 North America was the third-largest market for global plastic dielectric films and held a market share of 22.26%, in terms of volume, in 2018. The market in this region is primarily driven by the development in key manufacturing industries such as automobile, aircraft, and others. The presence of prominent aircraft manufacturers, such as Cessna Aircraft, Gulfstream Aerospace, Boeing Business Jets, and Beechcraft Corporation, in this region, has acted as the major driver for plastic dielectric films market in the region. Plastic dielectric films are primarily used in various industries owing to their excellent properties such as high dielectric strength, low shrinkage, good moisture resistance & product uniformity, lightweight, refractory operating temperature, low absorption, and high-temperature durability.

The market is characterized by the presence of various well-established companies, such as SABIC, KOPAFLIM Elecktrofolien GmbH, Coveme spa, Indorma Ventures Public Company Limited, and Bolloré Group. The industry will remain highly competitive over the years to come as the key companies are focusing on expanding their global market presence.

This report forecasts revenue and volume growth at global, regional, and country levels and provides an analysis of the latest industry trends in each of the sub-segments from 2014 to 2025. For the purpose of this study, Grand View Research has segmented the global plastic dielectric films market report on the basis of product, application, and region: 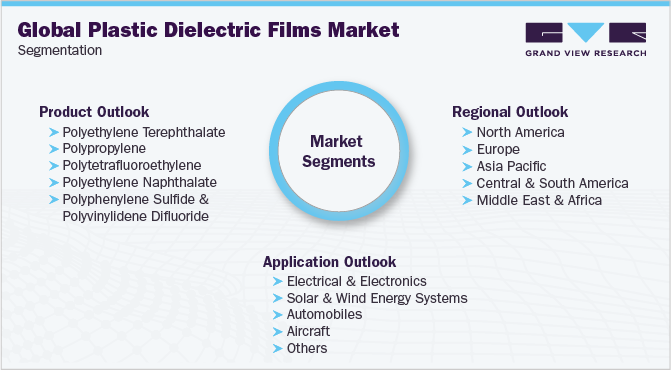 How big is the plastic dielectric films market?

What is the plastic dielectric films market growth?

b. The Electrical & electronics application segment dominated the plastic dielectric films market with a share of 31.7% in 2019. This is attributed to the rising product demand from various applications such as telecommunication, laminates, capacitor, integrated circuit, cable warp, and others.

Who are the key players in plastic dielectric films market?

What are the factors driving the plastic dielectric films market?