The global platinum market size was valued at USD 6.51 billion in 2019 and is expected to register a compound annual growth rate (CAGR) of 5.0% from 2020 to 2027. The product demand in industrial applications is likely to drive market growth over the forecast period. 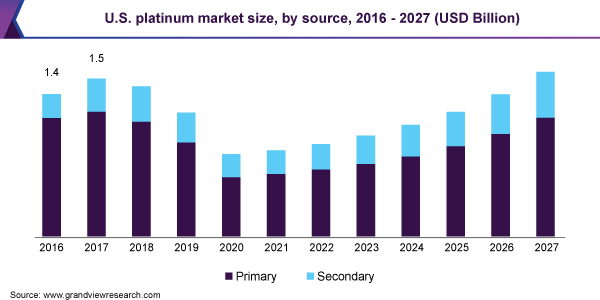 The industrial application segment comprises key sectors, such as chemical, electrical, glass, medical & biomedical, petroleum, and others. Within this segment, the chemical sector had a steady demand for the commodity owing to the production of nitric acid, fertilizers, synthetic fibers, and others. Processing of the aforementioned chemical products requires platinum as a catalytic agent during manufacturing operations. The demand trends from the chemical industry remained stable and observed a CAGR of nearly 12.2% from 2016 to 2018.

In the U.S., Sibanye-Stillwater mined more than 4,000 kilograms of platinum in 2018. The company produced the aforementioned volume from its mining operations in the Stillwater and East Boulder mine. Sibanye-Stillwater is the sole producer of primary platinum in the U.S. In 2017, the company opted for the expansion plans for its blitz section of the Stillwater mine. The project was due to be completed by 2022, providing nearly 2,000 jobs in the state of Montana. The expansion plan by the company was made to cater to the growing demand for commodities in various industrial sectors, such as chemical, medical, and biomedical.

However, the project was halted in 2020 owing to the spread of COVID-19 disease in the country. As per the company’s official, the project is likely to be postponed until further notice. One of the primary reasons to halt the expansion plan is due to the falling prices of platinum since the emergence of the global pandemic. The prices of the commodity crashed from nearly USD 32,857.3 per kilogram in January 2020, to roughly USD 18,904.2 per kilogram in March 2020. Thus, crashing commodity prices coupled with the shutdown of the expansion project in the U.S. is likely to hamper the market growth over the short term period.

The automotive industry is one of the key consumers in the global market. The production boost in the manufacturing of heavy-duty vehicles including trucks supported the consumption of primary platinum in 2018. As per the stats released by the International Organization of Motor Vehicle Manufacturers (OICA) in 2018, the production of heavy trucks in the U.S. increased by nearly 18.1% from 2017 to 2018. However, slow production in the passenger vehicle segment led to an overall decline of nearly -3.0%, in terms of volume, from 2017 to 2018.

The primary source segment led the market and accounted for more than 80.0% of the overall share in 2019. On the basis of source, the market is segmented into primary and secondary. Primary platinum is the mined commodity whereas secondary platinum refers to the commodity obtained post recycling. The primary source segment is likely to dominate the market, in terms of revenue as well as volume, over the forecast period. The top primary platinum producing countries are South Africa, Russia, Zimbabwe, Canada, and the U.S. As per the stats released by the United States Geological Survey (USGS) in 2019, South Africa produced nearly 137 tons of commodity, followed by Russia (22 tons), and Zimbabwe (15 tons) in 2018. The ongoing pandemic situation is likely to hinder the expansion plans of the vendors. The secondary source segment is anticipated to register the fastest CAGR over the coming years.

Rising scrutiny by regulators coupled with special emphasis on the recycling of precious metals is likely to positively influence the segment growth. The use of the product as a catalytic convertor is likely to remain a dominant point of application. These catalytic converters reduce the pollutant emission from the vehicles, thereby, reducing the overall carbon footprint. Owing to the aforementioned factors, the demand for secondary platinum is expected to grow tremendously over the forecast period. The segment is expected to observe higher penetration in the North America and Europe regions owing to the clear policies and norms related to the recycling of platinum group metals. The secondary source accounts for almost a quarter of the consumption trend in the aforementioned regions due to supportive initiatives and schemes by the governments.

The automotive segment led the market and accounted for more than 38.0% of the global revenue share in 2019. The industry on the basis of application is segmented into automotive, jewelry, industrial, and investment. Automotive is the dominant application segment, in terms of revenue as well as volume, owing to the greater use of commodity to manufacturer catalytic converters for vehicles. The increasing pressure from regulatory bodies around the globe has pushed automotive vendors to enhance their fuel efficiency while minimizing the overall pollutant emission. This is anticipated to remain a key driver for the segment growth over the forecast period.

The jewelry segment accounted for the second-largest share in 2019. The product is widely used in different kinds of jewelry, such as rings, pendants, necklaces, earrings, and others. The prominent jewelry markets are China, India, and the U.S. However, the segment is anticipated to witness slow growth as platinum-based products are losing market share to gold-based jewelry, specifically in countries, such as India and China. 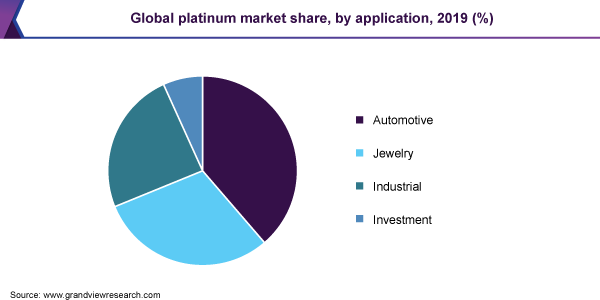 The investment application segment is expected to observe the highest CAGR over the forecast period. The ongoing declining prices of platinum have generated greater attention from investors. Due to the low prices, the investors are largely focusing on buying bars and bullions of platinum. Within the aforementioned category, bars related investments are likely to remain a key segment for the investment application over the predicted timeline.

The industrial application segment is expected to observe the second-fastest CAGR over the forecast period. The segment comprises of key industrial sectors, such as chemical, electrical, glass, medical & biomedical, petroleum, and others. The segment is likely to be driven by steady demand from the chemical sector owing to the increasing production of fertilizers.

The Asia Pacific led the market in 2019 and accounted for a revenue share of nearly 49.0%. The region is projected to retain the leading position over the forecast period due to the presence of automotive manufacturing powerhouses, such as India, China, and Japan. In addition, the implementation of new regulatory norms, such as BS-VI in the Indian automotive sector, is likely to push the manufacturers to reduce pollutant emissions and enhance fuel efficiency. Another key aspect of promoting regional growth is a strong demand for the product as an investment commodity.

The European region is projected to observe the second-highest growth rate over the forecast period. The region, amid uncertainties related to Brexit coupled with geopolitical factors, observed stagnant demand from 2016 to 2019. However, in 2019, it observed a positive trend due to the rising demand for diesel hybrid vehicles. As per the stats released by the European Automobile Manufacturers Association (ACEA) in 2019, the hybrid vehicle segment witnessed a gain of nearly 47.0%, in terms of production, from 2018 to 2019.

The North America region is expected to remain the third largest regional market over the forecast period. The regional growth is primarily driven by investment prospects due to the declining prices of the commodity.

The industry participants are focusing on creating a circular economy by creating recycling facilities around the globe. The majority of vendors are in constant pursuit of achieving sustainability in their operations owing to rising scrutiny by regulatory authorities around the globe. A few regional vendors are focusing on developing efficient extraction technologies to minimize the production cost by forming joint ventures with international companies. Some prominent players in the platinum market include:

This report forecasts revenue and volume growth at global, regional, and country levels and provides an analysis of the latest industry trends in each of the sub-segments from 2016 to 2027. For the purpose of this study, Grand View Research has segmented the global platinum market report on the basis of source, application, and region: