The global playing cards and board games market size was valued at USD 11.95 billion in 2018 and is expected to expand at a CAGR of 8.7% over the forecast period. The increasing importance of building team spirit through traditional tabletop games is a key factor driving growth. Rising preference of millennials for old school games during social gatherings is expected to further fuel the growth Increasing popularity of playing cards and board games for recreation is projected to drive the demand for traditional tabletop games.

Re-emergence of tabletop and card games as entertainment and recreational activities is projected to bode well for the market growth. Manufacturers are focusing on producing simple games with elegant mechanics and impressive artwork to attract more consumers. The rise in the number of board game cafes around the world is expected to positively influence the demand in near future. For instance, the Waterloo and Hackney branches of Draughts Café in London have approximately 500 and 850 board games respectively. Manufacturers focus on introducing various innovative playing cards and board games to reach a newer consumer base. For instance, the massive success of Settlers of Catan has attracted a large number of players and has boosted innovation and creativity among manufacturers. 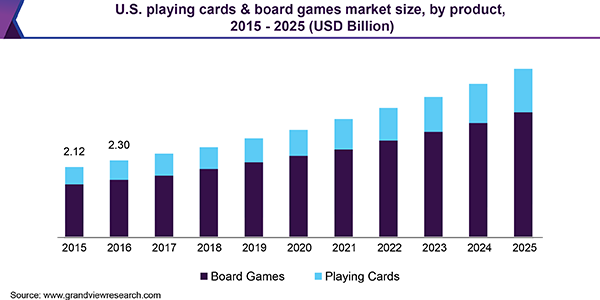 Mega-events in the gaming industry to introduce new games have increased consumer awareness which is likely to boost sales in the playing cards and board games market. For instance, Game On Expo launched in 2015 is the largest multimedia gaming convention and fastest-growing gaming event held in Arizona. It has a gaming lounge area, tournaments, free-play arcades, cosplay contests, and many special guests. Board games play a crucial role in the cognitive development of children. They help boost early learning, brain buzzing, vocabulary, and language skills, and teamwork among other cognitive skills.

The rising influence of social media and celebrity endorsements, especially on millennials is expected to drive the demand for tabletop games such as playing cards and board games, For instance, TableTop, a popular web series starring Wil Wheaton and Felicia Day generated great curiosity and improved sales of various tabletop games featured on the show. Traditional card games are gaining popularity on mobile gaming platforms owing to wider acceptance on social networks and thus, producers are developing digital versions of conventional card games. For instance, in 2019, Asmodee Digital launched a new The Lord of the Rings card game for Windows PC and Mac.

The offline distribution channel accounted for the largest market share of more than 64.5% in 2018. Most consumers prefer buying playing cards and board games at retail stores which are projected to fuel the growth of the segment. The rising culture of gaming cafes as a means to engage consumers with entertainment and recreation is projected to further fuel the segment growth. Moreover, the introduction of gaming zones in malls and pubs is also anticipated to provide traction to the segment in the forthcoming years.

The online distribution channel is expected to witness the fastest CAGR of 8.9% from 2019 to 2025. The rising online presence and easy access to mobile gaming platforms are some of the major growth drivers for the segment. The rapid rise of online media coupled with a rise in the working population across developing countries such as India, Bangladesh, and China is projected to create growth opportunities for the segment. Besides, the rapid growth of the online games and toys market is expected to drive the growth.

Board games held the leading market share of more than 67.0% in terms of revenue in 2018. Chess, scrabble, checkers, monopoly, and Ludo are some of the popular board games. Factors such as increasing engagement in leisure activities, the trend of taking a break from digital screens, and emphasis on face to face interaction are projected to boost the growth. Introduction of Kickstarter, a global crowdfunding platform has changed the profit model of the board games segment, wherein this segment accounts for 30% of the company’s revenue share. A surge in board games on Kickstarter relies on the boosting demand for tabletop games.

The monopoly held the largest market share of more than 29.8% in 2018. It is the best-selling board game in history. Along with entertainment and recreation, it helps teach a few valuable lessons such as financial prudence, planning, and developing patience, among others. Scrabble and chess are expected to continue witnessing substantial growth in the forthcoming years. 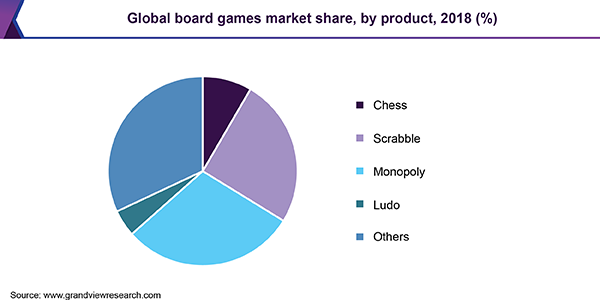 Playing cards is expected to expand at the fastest CAGR of 9.0% from 2019 to 2025. Rising casino culture is expected to drive the adoption of playing cards to win cash. Card games also teach some valuable social skills such as verbal communication, group interaction, and improved personality development among others. UNO, Spades, Poker, Rummy, and Magic are some of the popular playing card games.

The Asia Pacific held the largest market share of 34.3% in 2018. Widespread interest in playing cards in Asian countries such as India and Japan has contributed to the growth. The number of casinos in the region is expected to outgrow that in the U.S., which is expected to further boost the regional market. Moreover, recognition at the Asian Games has encouraged the popularity of some of these games. Recognition to Bridge and chess by the International Olympic Committee is projected to bode well for the regional market growth.

North America is expected to register the fastest CAGR of 9.2% from 2019 to 2025. The growing trend of board game cafes across the U.S. is anticipated to attract millennials looking for old-fashioned entertainment and recreational activities. This factor is projected to fuel the regional market growth over the forecast period. Along with traditional games, the region is expected to witness a steady rise in demand for board games as well as collectible card games which are likely to bode well for the regional market.

This report forecasts revenue growth at global, regional, and country levels and provides an analysis of the latest industry trends in each of the sub-segments from 2015 to 2025. For this study, Grand View Research has segmented the global playing cards and board games market report based on the product, distribution channel, and region: