The global polyurea coating market size was estimated at USD 525.8 million in 2015, growing at a CAGR of 12.2% from 2016 to 2024. Increasing investment in infrastructure development coupled with significant growth in the paint & coatings industry across the globe is expected to have a positive impact on market growth over the forecast period.

Growing consumer awareness regarding the utilization of superior quality waterproofing coating in residential buildings is expected to propel growth over the next eight years. In addition, increasing utilization of containment solutions in mining and construction sectors on account of the focus on environmental protection is expected to augment demand over the projected period. 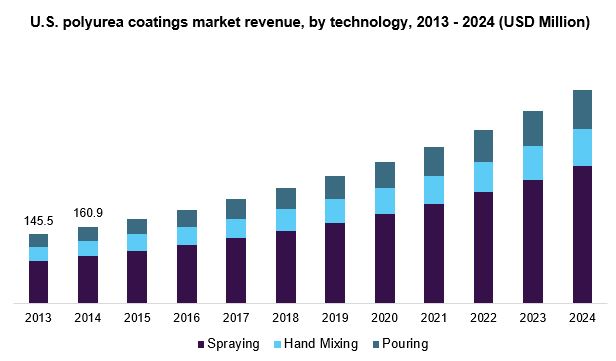 The rising use of waterproofing membranes in the construction sector for providing excellent seal protection is expected to promote the usage of polyurea as a raw material for manufacturing finished products. Polyurea coatings are also being utilized increasingly on account of their high aesthetic value.

High market penetration of polyurethane and polyaspartic coatings on account of their properties including long life & low wear & tear is expected to pose a credible threat to the polyurea coating industry over the forecast period. In addition, the predominant consumption of epoxy-based coatings on account of their low price as compared to their counterparts is expected to pose a challenge for the market over the coming years.

Spraying is the most dominant technology used for polyurea coatings on account of the high level of efficiency, low labor requirement, and technological advancements in the equipment. Manufacturers have been increasingly working towards the development of portable and lightweight equipment for spraying which is expected to have a positive impact on demand over the forecast period.

This technology encompasses features like fast curing, water insensitivity, high mechanical strength, chemical resistance, and high durability. This technology works under high pressure of about 140 to 220 bar and high temperatures ranging from 68 °C to 90 °C. it is exclusively used for application in roofing, containment liners, decks, and bridges.

Hand mixing was the second-largest technology accounting for 23.7% of the total revenue share in 2015. This can be attributed to its rising use in floor coatings including decorative floors, antistatic flooring, and industrial floors. North America dominated the market with a share of 32.6% in terms of volume.

The pouring segment is expected to witness the fastest growth over the next eight years. The equipment is portable and suitable for small as well as large volume applications which is expected to augment demand over the forecast period. North America dominated the global polyurea coatings market for pouring with a share of 28.5% in terms of volume.

The aromatic isocyanate-based polyurea coatings dominated the market, accounting for 62.6% of the total market share in 2015. These coatings have good physical properties and easy processability. Hence, aromatic systems are coated with aliphatic topcoats for desired color stability on exposure to UV light.

Aliphatic compounds are light stable; however, they are more difficult to process and retail at a higher price as opposed to their counterparts. High demand across numerous application areas including wind energy, transportation, and mining industries is expected to drive the demand of the aliphatic compound.

Hybrid polyurea segment was emerged as a dominant segment in 2015, accounting for 51.97% of the total revenue share and is expected to continue its dominance over the forecast period. These coatings are being increasingly utilized for application in parking, decks, tanks, and water treatment which is expected to propel demand over the forecast period.

These coatings are expensive due to the addition of certain high-cost catalysts in order to attain the required properties. These are highly used in North America and Europe. It is produced by the reaction of an isocyanate prepolymer and a curative blend of hydroxyl & amine-terminated resins and chain extenders.

The pure polyurea segment is expected to gain traction over the coming years owing to its superior properties, increasing utilization in construction activities, and cost-efficient in comparison to hybrid coatings. These coatings have been preferred for utilization in spray coating over the past years on account of low sensitivity towards humidity.

High utilization of pure polyurea coatings in the automotive industry in the North American region is likely to boost demand over the next eight years. In addition, these are highly preferred in flooring, roofing, and containment applications which are expected to have a positive influence on industry demand.

Building & construction was the largest application accounting for 42.6% in 2015. Polyurea coatings are used in a variety of substrates such as concrete, metals, and wood across a range of temperature and humidity environments, and are ideal for use in many waterproofing, corrosion control, immersion, and lining applications.

These coatings are exclusively used for residential and commercial applications which are expected to have a positive impact on demand over the next eight years. The high humidity resistance of the product increases its application scope in roofing, membranes, containment liners, decks, car parking, bridges, and offshore, thereby augmenting demand. 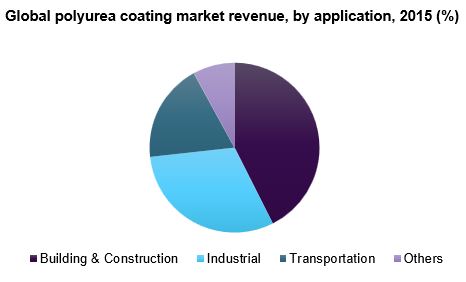 Industrial was the second largest segment that accounted for 30.7% of the revenue share in 2015. Rapid industrialization in developing economies coupled with the growing necessity to protect equipment, infrastructure, machine parts, and tools in industries is expected to have a positive impact on the market over the forecast period.

The transportation segment is expected to witness the fastest growth rate over the projected period. polyurea coatings are exclusively used in boats, helicopters, freighters, ships, and trains on account of their properties such as corrosion control, blast resistance, and non-skid and ballistic mitigation. This is expected to boost industry demand over the forecast period.

North America was the fastest-growing region, occupying a majority of the revenue share in 2015. Rising concern regarding environmental protection in the manufacturing and construction industries, mainly in Canada and Mexico is expected to fuel industry demand. In addition, the robust presence of extraction & production (E&P) sites in Canada and Mexico with abundant availability of minerals such as silver and gold are expected to promote the utilization of polyurea coating.

The Asia Pacific was the second largest region, occupying the majority of market revenue share in 2015. The market demand is propelled by the increasing manufacturing sector in the region. India is a lucrative market for polyurea coatings owing to increasing investment in infrastructure and the development of smart cities.

Vendors are offering a competitive cost structure as compared to other polyurethane-based systems, which is expected to widen application avenues, and thus have a positive impact on the industry. Rising concerns regarding greenhouse gas emissions aimed at reducing global warming are expected to force market players to increase R&D costs for the development of eco-friendly products.