The global portable media player market size was valued at USD 21.15 billion in 2018 and is expected to expand at a CAGR of 4.0% from 2019 to 2025. The demand for compact devices with high durability is accelerating the growth. The top-notch features of the new product such as high audio-video quality, compatibility, flexible storage capacity, and portability are further spurring the product demand.

Technological developments have facilitated the integration of advanced features such as Wi-Fi, Bluetooth connectivity, and USB, which make it compatible with other devices. This is augmenting the demand for the portable media player market. For instance, modern and luxury cars are coming up with portable audio-video players that have higher storage capacity and are compatible with mobile phones. Archos 35 vision 8 GB, is a portable media player, suitable when traveling for long hours as it has long battery life, 8GB storage capacity, lightweight, and other features. 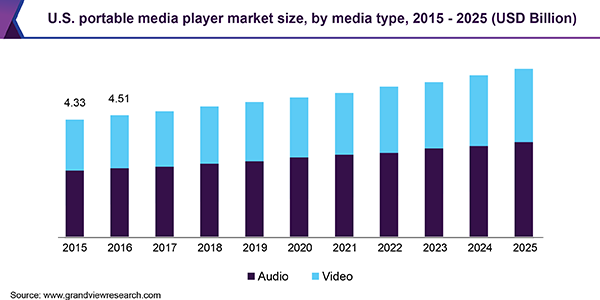 Developing countries such as India and China are expected to be lucrative markets for the launch of new entertainment products. The rise in disposable income and high demand for entertainment and music are encouraging consumers to spend on high-entertainment products. For instance, Saregama Caravan is a portable audio player with features such as built-in speakers, 5000 Hindi songs, and extended battery life. The music player is gaining popularity among all age groups due to the preference of consumers toward listening to old tunes. In 2018 alone, 389,000 units of Caravan were sold.

With the advancement in technology, the rise in usage of mobile devices such as smartphones and tablets with similar and additional functionalities is impacting the growth of the portable media players market. The usage of smartphones is expected to grow over the forecast period which might be a major challenge in the forthcoming years.

The portable audio players held the largest market share of 57.29% in 2018. The early developments in music recording technology and the rise in demand for music playing devices have been higher than those for video. Preference for listening to music in leisure time, mostly while working and traveling is projected to drive the demand for music playing devices. In Europe, the unit sales for portable audio devices were estimated between 184 million to 246 million units.

The video segment is anticipated to expand at a CAGR of 4.1% from 2019 to 2025. The inclination of consumers toward video entertainment such as series, movies, and music videos via online sources namely Amazon Prime and Netflix is accelerating the segment growth. For instance, Archos has launched a range of portable media players named ARCHOS Hello, which can be used for watching videos, listening to audio, and connecting to people along with other features.

Offline was the largest segment with a market share of 77.22% in 2018. A variety of products from several manufacturers, real-time purchase decisions, free demonstrations, and guidance from sales executives on choosing the best product are the prime reasons for a significant rise in sales from this distribution channel. For instance, Walmart, Costco, and Gamestop among others are some of the popular retailers that provide consumer electronics in the U.S. 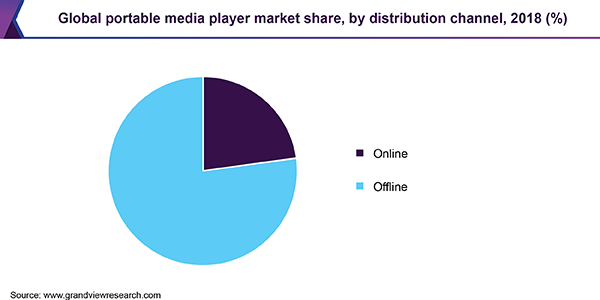 The online distribution channel is projected to register the fastest CAGR of 4.2% from 2019 to 2025. The increase in population and smartphone users along with ease of internet access and penetration of e-commerce is accelerating the growth. Moreover, many offline players are offering their products through the online channel as well. Apple, Samsung, Reliance Digital, and Chroma are some of the few companies that sell their products through both offline and online channels.

North American is estimated to hold the largest market share. This region is an early adopter of technology. The large market share is attributed to the increasing adaptation of smart connecting devices and the expanding entertainment and media industry. The willingness of consumers to use new technologies has encouraged manufacturers to develop advanced products. As per the trends, in July 2016, more than 40% of U.S. households had a portable media player in their homes.

The APAC region is expected to be the fastest-growing market, thereby exhibiting a CAGR of 4.6% from 2019 to 2025. Changing lifestyles, the increased impact of western culture, and the rise in disposable income are the major factors responsible for the increase in demand. APAC has a large penetration of unorganized players who are coming up with new products thereby further driving the growth. For instance, Shenzhen GemDragon Display Technology Co., Ltd., Guangzhou Desen Technology Co., Ltd., and AIYOS Technology Co., Ltd. are some of the indigenous companies in China that provide portable media players.

Key players focus on product innovation to attract consumers. Increasing demand from developing economies is anticipated to create business opportunities for major companies. The new product launch is one of the major strategies adopted by the companies to gain significant market share.

This report forecasts revenue growth at global, regional, and country levels and provides an analysis of the latest industry trends in each of the sub-segments from 2015 to 2025. For this study, Grand View Research has segmented the global portable media player market report based on the media type, distribution channel, and region: