The global pre-packaged sandwiches market size was valued at USD 13.0 billion in 2018 and is expected to grow at a compound annual growth rate (CAGR) of 4.9% from 2019 to 2025. Growing demand for convenience food among the working class population is expected to remain a driving factor for the market across the globe. Furthermore, over the past few years, availability of a wide range of products for different dietary preferences and tastes has been fueling the demand for convenience products, including pre-packaged sandwiches. 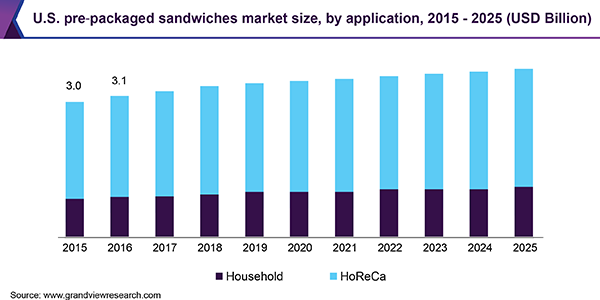 Over the past few years, consumers’ preference has been shifting towards plant-based food products owing to rising awareness regarding vegan food diet. The number of vegans in U.S. grew by 600% from 2014 to 2017. Furthermore, emergence of plant-based cheese substitutes as one of the fastest-growing food product category in U.S. is expected to remain one of the prominent trends, which is expected to drive the market for pre-packaged sandwiches.

Vegetables including carrots, sweet potatoes, and beetroots have gained popularity among the consumers as they both enhance the taste and visual appeal of the sandwiches due to their bright colors. Similarly, jackfruit and cauliflower have also gained popularity as filling, as these are considered a good source of vitamins and minerals, thereby driving the demand for the market for pre-packaged sandwiches.

Breakfast sandwiches are gaining popularity among the consumers due to the egg protein content of it. Furthermore, consumer preference has been shifting towards organic ingredients due to growing awareness about the negative effects of chemical based food items. As a result, the manufacturers are also focusing on development of organic meat, vegetables, and bread for production. In addition, packaging is an important factor that influences consumers’ purchasing decision. Consumers are opting for sustainable and environmentally friendly packaging across the world. This, in turn, is boosting the demand for pre-packaged sandwiches.

Based on application, the HoReCa or the food service segment dominated the market for pre-packaged sandwiches in 2018, accounting for 70.9% share of the global revenue. According to journal called Prepared Foods, in September 2015, around 74.0% of the U.S. quick-service restaurants had sandwiches in their menus. A significant part of the European and North American consumers dines out regularly for all the meals including breakfast, lunch, and dinner. This, in turn, is driving the application segment for pre-packaged food products such as sandwiches.

The household application segment is projected to expand at the fastest CAGR of 5.7% from 2019 to 2025. Growing penetration of e-commerce in the food industry is expected to remain a prominent growth factor for the pre-packaged food among the households. In addition, convenience stores, supermarkets, and hypermarkets have been keeping a wide range of pre-packaged meals, considering the growing consumer demand for it. The busy schedule of the working professionals is also expected to fuel the demand for pre-packaged meals across the world.

As of 2018, the non-vegetarian products held the largest share of more than 70.0%. Non-vegetarian products are considered a rich source of protein and essential micronutrients such as iron, zinc, and vitamins. Over the past few years, animal protein products including bacon, sausage, poultry, and egg white have gained significant popularity as filling in pre-packaged food products such as sandwiches. Rapid urbanization in the developing countries, including China and Brazil, has improved the infrastructure, including cold chain, which, in turn, has driven the meat product’s market. Furthermore, a wide range of poultry meat, bacon, egg, and fish based packaged food has gained significant popularity among the millennial population as a healthy ready to eat meal.

The vegetarian product segment is expected to expand at the fastest CAGR of 5.3% from 2019 to 2015. Growing vegan population in Europe and North America is expected to fuel the demand for vegetarian products in the near future. Over the past few years, the U.K. vegetarian sandwich market has been witnessing significant growth as a result of increasing concerns over adverse effects associated with excessive consumption of animal health products. The manufacturers including Tesco, Pret a Manger, and Sainsbury’s in U.K. have expanded their vegetarian portfolio in the last few years. 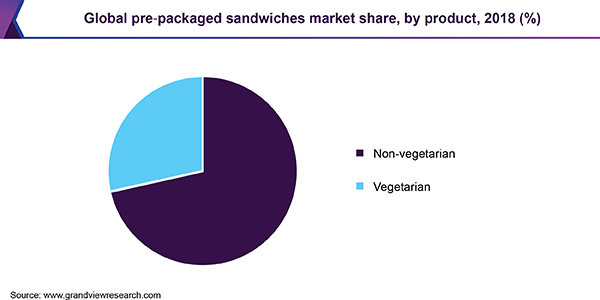 Furthermore, new government guidance on healthy consumption under the name, “Eatwell Guide” encourages the consumers to eat more plant-based food products and reduce the consumption of egg, cheese, meat, and fish as sandwich filling. As a result, consumers are opting for environment-friendly plant-based products in the European nations. For instance, in January 2017, Marks & Spencer Group plc launched vegan sandwiches considering the rising demand for vegan food products. These sandwiches are available in different fillings including chia, linseed, roasted veg, avocado, and pumpkin seeds.

As of 2018, North America dominated the market, accounting for 30.0% share of the global revenue. Sandwich is considered to be an essential part of the diet among the U.S. consumers. Presence of various ingredients including cheese, flavors, sauces, and bread is an important factor that affects the purchasing decision of the consumers during buying pre-packaged sandwiches.

The market players for pre-packaged sandwiches have been strategically expanding their business through mergers and acquisitions and product innovation. For instance, in April 2017, Tyson Foods, Inc. acquired AdvancePierre Foods, a U.S. based company that offers a wide range of ready to eat meals and snacks. This acquisition has expanded the product portfolio of Tyson Foods, Inc. Some of the prominent players in the pre-packaged sandwiches market include:

This report forecasts revenue growth at the global, regional, and country levels, and provides an analysis on the latest industry trends in each of the sub-segments from 2015 to 2025. For the purpose of this study, Grand View Research has segmented the global pre-packaged sandwiches market report based on product, application, and region:

How big is the pre packaged sandwiches market?

What is the pre packaged sandwiches market growth?

b. HoReCa or the food service segment dominated the pre-packaged sandwiches market with a share of 70.7% in 2019. This is attributed to the preferences among European and North American consumers dines out regularly for all the meals including breakfast, lunch, and dinner

Who are the key players in pre packaged sandwiches market?

What are the factors driving the pre packaged sandwiches market?

b. Key factors that are driving the market growth include growing demand for convenience food among the working class population and easy availability of a wide range of products for different dietary preferences and tastes.