The global pressure monitoring market size was valued at USD 6.7 billion in 2016 and is projected to witness lucrative growth over the forecast period. The rising prevalence of cardiac disorders is expected to accelerate the growth of the market.

Cardiac disorders commonly lead to pressure fluctuations amongst people. High BP is the most common problem amongst such a group of population. The WHO recorded 7.5 million deaths due to hypertension, which accounted for around 12.8% of all deaths. Unhealthy lifestyle results in a high prevalence of cardiac disorders. Hence, in order to minimize such a high mortality rate, there is a growing need for BP monitoring products that enable rapid examination. 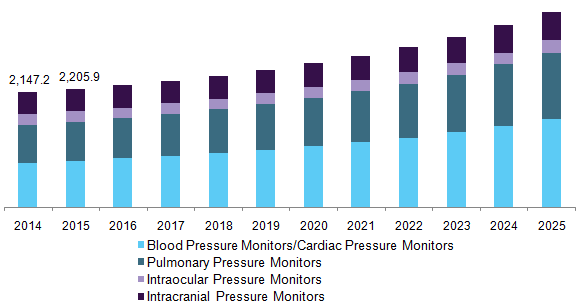 Respiratory diseases lead to a lack of oxygen in the blood. Healthcare professionals advise that oxygen saturation should be more than 95% in hemoglobin. Low oxygen levels in the blood might lead to increased shortness of breath and pulse rate. As a result of such complications, there is a huge need for monitoring oxygen in the patient’s blood. This is expected to propel the growth of the market.

Intracranial Pressure (ICP) monitoring is vital in case of a brain injury. It helps in diagnosing the pressure associated with the nervous system and blood vessel tissues in order to avoid any sort of damage to the brain. This test is generally conducted in the ICU and involves invasive methods of diagnosis.

According to the National Center for Biotechnology Information (NCBI), people suffering from glaucoma were estimated to be 64.3 million globally in 2013. With such a rising number of people with glaucoma, the demand for intraocular pressure (IOP) monitors is also on the peak, thereby, accelerating the demand for such products.

Rising geriatric population is an important driver supporting the growth of the pressure monitoring market. This group of the population suffers from various chronic disorders, such as heart diseases and glaucoma. Most of the aging population tends to develop hypertension. Hence, the demand for BP monitors is expected to increase with the rising need to maintain normal BP levels. Thus, it helps to escalate the growth of the overall market.

BP monitoring devices held the largest market share in 2016 on account of the rising prevalence of pressure fluctuations and hypertension. This has led to the huge adoption of BP monitors amongst such groups of the population.

The market has witnessed technological advancements such as wearable BP monitors that can be connected to smartphone applications. For instance, Philips Healthcare launched the Upper Arm BP monitor, which helps in tracking BP and heart rate while connecting to Philips HealthSuite Health app.

Patients need to monitor their BP at regular intervals in order to combat pressure fluctuations. As per the Center for Disease Control and Prevention (CDC), hypertension affects nearly 1 in every 3 adults of the overall American population. Thus, the presence of a high number of people diagnosed with high BP is anticipated to drive the demand for BP monitoring devices.

Pulmonary pressure monitoring is expected to showcase significant growth over the forecast period. This can be attributed to the rising prevalence of respiratory diseases and their subsequent complications. People with respiratory diseases require a diagnosis in order to check the amount of oxygen content in the blood. This is expected to foster the market growth in the near future.

IOP monitors involve noninvasive devices to measure fluid pressure inside the eye. Patients at a high risk of glaucoma need diagnosis with tonometers, which help detect this disease. For instance, Icare ic100, manufactured by Icare Finland Oy helps in measuring the IOP of the patient.

The invasive technique segment is expected to witness significant CAGR over the forecast period due to rising cases of brain injuries. In such cases, ICP monitoring is required to diagnose the pressure of the blood vessel tissues in order to avoid any severe damage to the brain.

On the basis of application, cardiac disorders held the largest market share in 2016 owing to the rising prevalence of cardiac-related disorders. Cardiac disorders lead to pressure fluctuations. Hypertension is one of the major problems faced by people suffering from cardiac disorders. Hence, such a group of people is likely to generate huge demand for BP monitoring devices.

Respiratory diseases are projected to exhibit significant growth over the forecast period. This can be attributed to the rising prevalence of respiratory disorders, which lead to shortness of breath. With such a growing number of cases of respiratory diseases, there is an escalating need for pulse oximeters, capnographs, and spirometers, which is expected to support the growth of the target market. 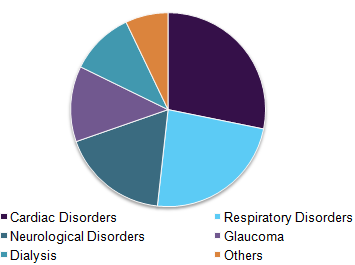 Glaucoma is another important segment accelerating the growth of the market. Glaucoma can be detected by measuring the eye fluid pressure. IOP varies throughout the day and night. It also changes as a result of various factors such as respiration, heart rate, and topical drugs.

Neurological disorders might cause damage to the nervous system. With a rise in ICP, the patient might suffer from brain tissue or ischemic neuronal damage. Hence, ICP monitoring is widely used by healthcare professionals in case of brain injuries to examine the condition of the skull.

Home care settings are expected to showcase significant growth over the forecast period due to the introduction of a large number of BP monitors that can be used at home. Patients find it convenient to use these technologically advanced devices for self-monitoring of BP.

Ambulatory surgical centers and clinics are also growing at a lucrative rate over the forecast period due to the rising number of people with problems related to pressure fluctuations. Such people need diagnosis at regular intervals, hence they visit clinics for regular BP checkups.

Ambulatory surgical centers also require such monitoring devices during a surgical procedure. These devices help in assessing the condition of the patient for conducting any complex treatment.

In 2016, North America dominated the market owing to rising healthcare expenditure in the U.S. and the development of sophisticated infrastructure in the country. Moreover, the rising prevalence of cardiac-related disorders in the U.S. is also supporting the growth of this regional market.

The Asia Pacific is projected to witness the highest growth over the forecast period. This is due to the rising prevalence of chronic diseases such as respiratory and cardiac disorders. People affected with such diseases need pressure monitoring at regular intervals in order to maintain their overall wellbeing.

This report forecasts revenue growth at global, regional, & country levels and provides an analysis of the latest trends and opportunities in each of the sub-segments from 2014 to 2025. For the purpose of this study, Grand View Research has segmented the global pressure monitoring market on the basis of product, procedure, application, end-use, and region: