The global pressure relief devices market size was estimated at USD 2.53 billion in 2015 and is expected to reach USD 4.14 billion by 2025, growing at a CAGR of 5.1%. The increasing incidence of pressure ulcer development due to a highly susceptible and rapidly growing aging population is expected to drive the market growth over the years to come.

The geriatric population is more prone to the development of pressure ulcers that are also known as bedsores. The number of people aged 60 and above has been substantially increasing in recent years in most of the regions and it is expected to keep growing over the coming years. This factor will be contributing to the market growth.

The prevention of these ulcers requires an interdisciplinary approach for its management and well-trained hospital staff. Although some parts of the treatment can be streamlined, specific care has to be given according to the requirements of every patient.

As these ulcers can be prevented with proper management, many campaigns have been launched over recent years for raising awareness. Knowledge of available resources facilitates effortless progression through all levels of care. Some of the campaigns initiated by the government of U.K. include, “Stop the Pressure”, “Zero Pressure”, and “Islandwide Pressure Ulcer Prevention Campaign”.

Low-tech devices are the largest type segment of the global pressure relief devices market. The factors contributing to the segment growth mainly include cost-effectiveness of the low-tech mattresses, easy availability in the market, and therapeutic benefits for the prevention of bedsores.

Amongst the low-tech devices, foam-based mattresses held the majority of share in 2015 due to high usage volume and cost-effectiveness. The gel-based mattresses are projected to be the fastest-growing segment over the forecast period owing to their therapeutic benefits in pressure ulcer management.

Dynamic air therapy beds held the majority of share in the high-tech devices segment, whereas kinetic beds are expected to be the fastest-growing segment over the coming years. The demand for these devices is expected to rise over the forecast period as they are highly technology-based.

North America was identified as the largest market for pressure relief devices in the year 2015. Nearly 18% of the American population will be aged 65 and more by 2025. The aging patients with chronic illnesses are placing a tremendous burden on the healthcare systems.

Furthermore, according to Centers for Medicare and Medicaid Services (CMS), expenditure on hospital-acquired illnesses in the U.S. has grown at a rate of 7% from the year 2000 to 2013. The pressure sores are ranked fourth in the list of 14 hospital-acquired conditions published by the CMS.

On the other hand, the Asia Pacific region is projected to showcase the fastest growth rate over the forecast period. The rising geriatric population in this region, which is more prone to the development of these sores and increasing disposable income, is expected to drive the growth. 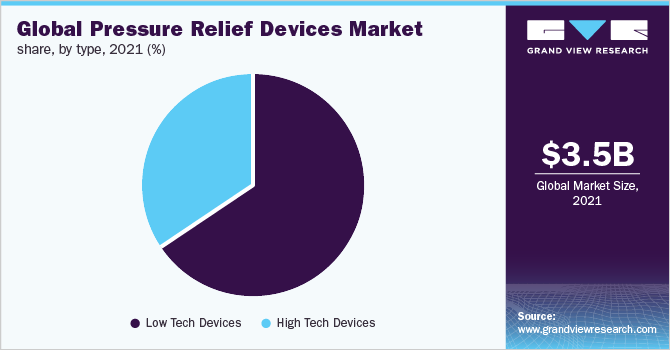 This market is expected to witness impressive growth over the forecast years. The competition between the companies manufacturing these devices is high, as their demand is increasing. Some of the key players in this industry include ArjoHuntleigh; BSN medical, Inc.; Hill-Rom Holdings, Inc.; PARAMOUNT BED HOLDINGS CO., LTD..; Acelity; Invacare Corporation; and Talley Group Ltd.

Some of the companies are focusing on new product launches as a part of their strategic expansion. The market is marked by partnerships between companies and acquisitions of smaller players. For instance, in 2015, ArjoHuntleigh collaborated with BAM Labs to provide BAM Labs Smart Bed Technology to the acute care market in the U.S.

This report forecasts revenue growth and provides an analysis of the industry trends in each of the sub-segments from 2014 to 2025. For the purpose of this study, Grand View Research has segmented the global pressure relief devices market on the basis of type, and region: