The global procedure trays market size was valued at USD 15.99 billion in 2021 and is expected to expand at a compound annual growth rate (CAGR) of 11.3% from 2022 to 2030. The growing number of surgeries globally is a key factor expected to drive the growth of the market for procedure trays during the forecast period. The advent of minimally invasive and non-invasive procedures has increased the number of surgeries performed each year. This is also expected to fuel the product demand in near future. 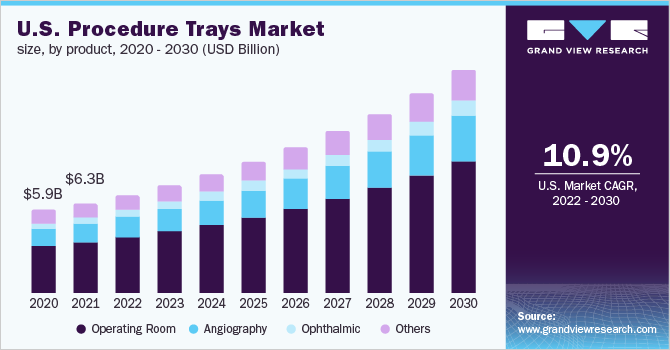 Patients choose non-invasive or minimally invasive operations to avoid the risk of infections associated with invasive surgeries. Non-invasive operations necessitate shorter hospital stays, saving both time and money. An increase in the frequency of road accidents, an aging population, and increased healthcare spending in emerging economies are expected to increase the number of procedures performed during the projection period. Global healthcare spending is expected to exceed USD 25.00 trillion by 2040, according to the U.S. Census Bureau. Moreover, according to the WHO, the global population aged 60 and up will double by 2050 and reach 2.1 billion.

All the tools and devices needed to perform a specific surgical or diagnostic operation are included in custom procedure kits. Although these kits are not utilized in every medical operation, they are recommended when treating cardiovascular, ophthalmology, and orthopedic ailments and disorders, as well as wound care and dental procedures. Physicians and healthcare practitioners can utilize custom procedure trays to pick clean surgical instruments and tools for single use. The pre-configured and pre-packaged trays and kits minimize the requirement for a massive inventory of individual components. Hence, pre-packaged bespoke procedural solutions help increase the quality of services as they streamline inventory management.

Although the demand is 40 times higher than typical, there is no full fulfillment of demand due to supply chain disruptions. All countries, including India, China, and others, have put an end to their efforts to save medical procedure trays for their populations. As a result, there is a strong market need for procedure trays

In addition, companies are developing their end-to-end supply chain to optimize product costs to increase quality and services linked with customized procedure trays. Removing third-party expenditures helps businesses save money. Manufacturers are focused on efficient sterilizing procedures to avoid infections among healthcare practitioners and patients in the wake of the rapidly spreading COVID-19 infections. As a result, firms in the market are focusing on improving operational performance to increase their global credibility.

Procedure tray manufacturing companies use unique and advanced technologies to design, produce and sell products to diverse customers based on the amount of protection required for distinct job risks. Most manufacturers have their original technology or have licensed it from other industry participants. For instance, in February 2021, Uvamed Ltd, based in the U.K., is the creator of the popular Tamper Evident Rainbow Trays and Rainbow Trays for anesthetic medications.

The Trauma Tray crash-box/procedure-pack won an Innovate UK. award, due to their various benefits, These trays are secure and auditable entire procedure packs for usage outside of traditional hospital settings, such as field hospitals, emergency departments, ambulances, care homes, and rescue services, which are projected to drive market expansion

The U.S. dominated the market with the highest revenue share of 88.80% in 2021. Government initiatives to encourage the adoption of disposable medical supplies to prevent infections in operating rooms are the key factor responsible for the growth of the market in this region.

The increasing number of surgeries and the geriatric population are the factors that drive the market growth in the U.S. According to Regenexx, in the U.S., more than 7 million orthopedic surgeries were performed in 2021. According to the National Center for Health Statistics, more than 40 million surgeries are performed each year, and that number is expected to grow exponentially. In addition, according to the American Psychological Association in 2021, the geriatric population in the country is currently at 46 million and is supposed to double itself by 2060, which is supposed to increase surgeries coupled with advancements in technology and drive the market growth.

The operating room led the market and accounted for more than 58.34% share of the global revenue in 2021. The segment is likely to retain its position throughout the forecast period. One of the major drivers for market expansion is the rising number of operations performed around the world. Government laws encouraging the use of single-use sterile equipment to prevent infections are helping to fuel the demand for procedure trays. Some of the components of operating room procedure trays are drapes, gowns, syringes, needles, suction tubes, and swabs.

According to the International Osteoporosis Foundation, osteoporosis affects around 200 million women worldwide. Furthermore, occurrences of hip fractures in men are expected to rise by 310% and in women by 240% by 2050. In the U.S., about 44 million people have osteoporosis, which means that an osteoporotic fracture happens every three seconds. Men over the age of 50 have a 27% chance of developing an osteoporotic fracture. As a result, rising rates of osteoporosis and fractures are predicted to increase the need for orthopedic surgery.

In addition, mergers and acquisitions of well-established market players are one of the key strategies adopted by many market players, which are expected to increase market growth in the near future. For instance, in January 2019, Owens and Minor signed a 5-year agreement with Scripps Health, which is a U.S.-based healthcare system. The company is expected to serve five acute care hospital campuses, non-acute care campuses, clinics, and outpatient centers.

Angiography is the second leading segment after the operating room, accounting for more than 21.14% share of the global revenue in 2021. Cardiovascular diseases are one of the major causes of morbidity and mortality across the globe. The increasing prevalence of heart diseases and the availability of technologically advanced devices for use in surgeries are factors expected to fuel the growth of the angiography segment.

According to the American Heart Association, cardiovascular diseases are the leading cause of death, accounting for 17.9 million deaths per year, and this number is expected to increase to over 23.6 million by 2030. Angiography is used for the diagnosis of coronary heart disease. It is a non-interventional procedure and is generally performed in radiology units. The level of standardization in angiography trays is high. One of the key components in these trays is fluid management systems.

Hospitals led the market and accounted for more than 51.19% share of the global revenue in 2021. Surgery departments and operating rooms in hospitals have a wide variety of needs. Sterile supplies for surgeries and decontamination of instruments are crucial for preventing hospital-associated infections. Therefore, doctors and staff in operating rooms are highly dependent on the use of procedure trays. Adoption of procedure trays helps reduce the incidence of infections. In addition, the use of procedural trays and kits results in a cost reduction. 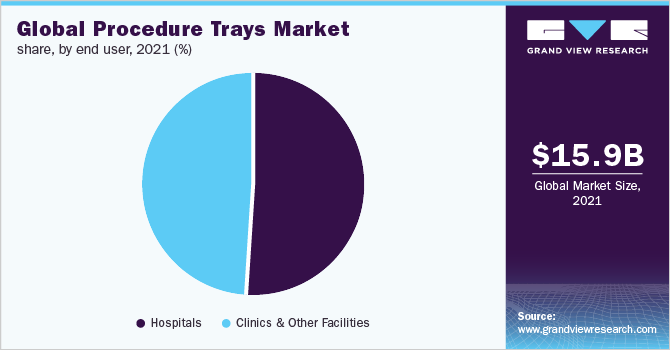 The clinics and other facilities segment is anticipated to witness the fastest CAGR of 11.47% during the forecast period. Healthcare facilities considered in this segment include individual physician offices, dental practices, nursing homes, clinics, and ambulatory care centers. The majority of the nonsurgical procedures that use procedure trays, kits, and packs are performed in outpatient care facilities. The wide range of procedures performed at clinics and other ambulatory centers include ophthalmic procedures, urological incontinence procedures, and angiography. Angiography is a key non-interventional procedure performed at outpatient clinics.

North America dominated the market and accounted for over 44.78% share of global revenue in 2021. Various government measures to reassure the use of single-use medical supplies to prevent infections, as well as the presence of prominent market participants in the region, are expected to help the region's growth. Furthermore, an increase in the aging population and the prevalence of chronic diseases, such as osteoporosis and heart-related problems, in the region coupled with high awareness about healthcare and advanced surgical procedures are likely to increase the demand for surgical procedures in this region. According to an article published by International Osteoporosis Foundation, by the year 2020, 44 million people in America above the age of 50 will have osteoporosis.

The Europe market is likely to register a CAGR of 12.79% during the forecast period. The U.K., Germany, France, and Italy are some of the major contributing countries to the region. Germany accounted for the highest market share in 2021, followed by the U.K. The high share of this region can be attributed to increasing reimbursement for surgical procedures, the presence of a large pool of geriatric population, high adoption of advanced technology, and rising demand for minimally invasive procedures over conventional methods. In Europe, Cardiovascular Diseases (CVDs) remain the primary cause of death in most countries.

Some of the key players that dominated the global market in 2021 include Teleflex Incorporated, Owens & Minor, Inc.; 3M Healthcare, Cardinal Health, BD, B. Braun Melsungen AG, Merit Medical Systems. Companies are stressing research and development to develop technologically advanced products to gain a competitive edge, along with companies are engaging in mergers, partnerships, and acquisitions, aiming to strengthen their product portfolio and manufacturing capacities and provide competitive differentiation.

For instance, in December 2021, American Contract Systems (ACS), a Minnesota-based provider of sterilizing and kitting services for the Custom Procedure Tray (CPT) solution, was acquired by Owens & Minor, Inc. This acquisition will increase their capacity to surpass and meet their customers' collective needs for surgical procedure trays, a market that is predicted to grow rapidly in the near future. Some prominent players in the global procedure trays market include:

This report forecasts revenue growth at the global, regional, and country levels and provides an analysis of the latest industry trends in each of the sub-segments from 2017 to 2030. For this study, Grand View Research has segmented the global procedure trays market report based on product, packaging, end user, and region:

What is the procedure trays market growth?

Which segment accounted for the largest procedure trays market share?

b. North America dominated the procedure trays market with a share of 44.78% in 2021. This is attributable to the local presence of key market players and various initiatives undertaken by the government to encourage the use of single-use medical supplies to prevent infections.

Who are the key players in procedure trays market?

What are the factors driving the procedure trays market?

b. Key factors that are driving the market growth include favorable government regulations for prevention and control of Healthcare-Associated Infections (HCAI), benefits of customization, and constant increase in the number of surgeries being performed worldwide.

How big is the procedure trays market?