The global produced water treatment market size was valued at USD 5.8 billion in 2015 and anticipated to expand at a CAGR of 6.0% over the forecast period. Strict regulations regarding produced water discharge limits have led to a boost in the requirements for advanced technologies for oil-water separation and for enhancing the efficiency of oil recovery.

Produced water is generated as a byproduct during the exploration and production operations of oil and natural gas. Treatment of produced water in the oil and gas sector involves the use of various primary, secondary, and tertiary separation methods for removal of oil droplets, sediments, mud particles, heavy metal particles, salts, hydrocarbons, and other organic content. 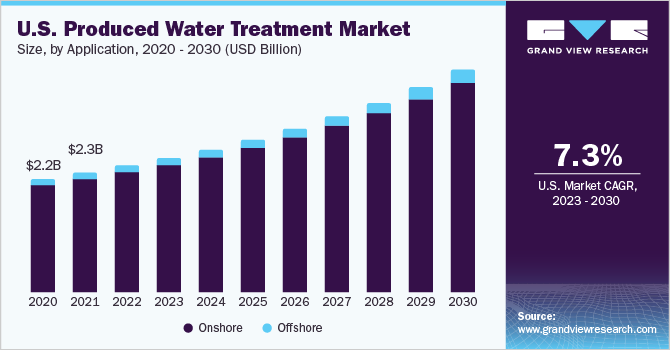 Rising use of freshwater, coupled with the prolonged discharge of oil contained treated water is expected to pollute the existing resources and lead to scarcity issues in the future. Hence, governments of developed countries including Germany and the U.S. have regulated stringent environmental policies and practices by imposing minimized or zero discharge limits of oil concentrations in disposed streams.

Regulatory support for increasing E&P spending on coal bed methane (CBM) and gas hydrates in Durgapur and Andaman and Nicobar in India, respectively is expected to open up new avenues over the next few years. Furthermore, the emergence of the U.S. and Canada as production destinations for alternative sources including tight oil and shale gas as a result of increasing spending on hydraulic fracturing is projected to have a significant impact on the market growth.

The low adoption rate of technologies in the oil and gas sector in developing countries including Indonesia and India due to lack of regulations pertaining to water management in the energy sector is expected to remain a challenging factor for the industry participants. Furthermore, increasing usage of enhanced oil recovery in Russia, Venezuela, and UAE is projected to limit the application of produced water treatment services.

Tertiary separation is expected to remain the fastest-growing technology segment, expanding at a CAGR of 6.8% over the forecast period. Rising environmental concerns over BTX (Benzene, toluene, xylene) in the oil and gas industry due to increasing awareness regarding the reduction in greenhouse gas emissions are expected to play a significant role in increasing the usage of tertiary treatment.

The expansion of the market is expected to propel the use of various advanced technologies such as media filtration, adsorption, oxidation, ceramic microfiltration/ultrafiltration, and others, thereby propelling the growth of produced water treatment technologies market over the forecast period. In addition, the produced water treatment technologies market is expected to grow owing to the imposition of stringent environment protection regulations by the governments across all regions.

Crude oil accounted for 62.8% share of the global revenue in 2015. Production of crude oil from conventional sources has considerably declined over the past few years, due to the continuous depletion of oil concentrations in the oil-water produced streams. This trend has further led to the generation of an excess amount of produced water. This scenario is likely to reflect in terms of a decline in the market share of crude oil as a production source.

Natural gas is expected to remain the fastest-growing production source, expanding at a CAGR of 6.2% over the forecast period. Rising production of natural gas as a result of technological advancement in terms of the increasing importance of LNG is expected to promote the usage of water management services. Furthermore, the majority of countries including China, India, Pakistan, and Bangladesh have planned to increase the share of natural gas to reduce the reliance on oil and coal as a source of energy generation.

Based on the application, the produced water treatment market can be segmented as onshore and offshore. The onshore application segment accounted for 72.0% share of the global revenue in 2015. The high adoption rate of management services in onshore fields to limit the utilized water for irrigation applications is expected to have a positive impact on segment growth. 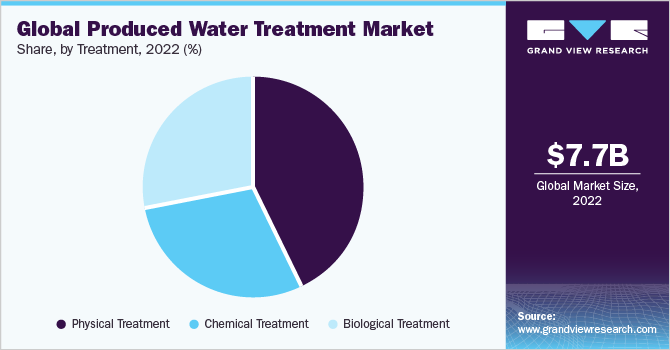 Offshore is expected to expand at the fastest CAGR of 6.3% over the forecast period. Over the past few years, prominent market players including Siemens are focusing on secondary and advanced treatment technologies for minimizing the discharge as well as oil spills in surrounding water bodies in the offshore sector. This favorable scenario is likely to promote the application of management services.

North America dominated the market in 2015, accounting for 42.5% share of the total revenue. Strong presence of crude oil reserves in the U.S. and Canada is expected to increase the usage of water management services.

Asia Pacific is projected to remain the fastest-growing regional market, expanding at a CAGR of 7.1% over the forecast period. Implementation of First Shale Gas Policy and Open Acreage Licensing Policy (OALP) by the governments of China and India, respectively will be a key driver over the next few years.

Russia is the largest oil producer in Europe and has the eighth largest oil reserves across the globe. In addition, other major oil reserves of the region are found in countries including Norway and the U.K. Presence of large oil reserves in the region is expected to drive the market over the forecast period.

Key industry participants include Veolia, Siemens, GE, Schlumberger, Halliburton Company, Weatherford International, Baker Hughes, Exterran Corporation, and Ovivo. The industry is highly fragmented in nature and the top four market players together accounted for 21.6% share in the year 2015. The market comprises prominent and well-established players that captured a minor share, while the larger portion was captured by other global and regional players in 2015.