The global prosthetics and orthotics market size was valued at USD 6.11 billion in 2020 and is expected to grow at a compound annual growth rate (CAGR) of 4.2% from 2021 to 2028. Increasing cases of sports injuries and road accidents, the rising number of diabetes-related amputations, and the growing prevalence of osteosarcoma around the world are poised to drive the global market. During the pandemic, many regulatory agencies and non-governmental organizations responded to the changing scenario. For example, the National Association for the Advancement of Orthotics & Prosthetics (NAAOP) wrote an open letter to all state governors dated March 19, 2020, seeking continuation of Prosthetic and Orthotic Care services as part of essential health benefits that patients must have access to during the pandemic. 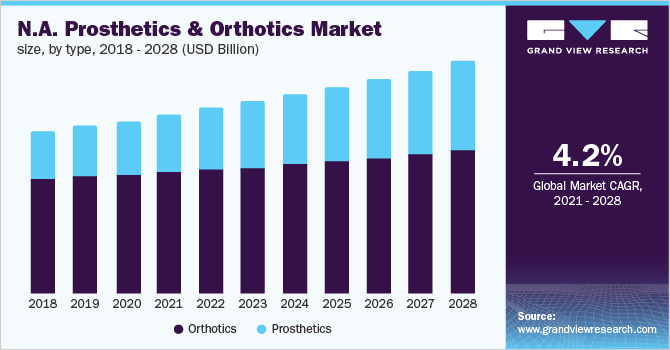 Nowadays, more people are choosing sports as a career. As per the American Physical Therapy Association (APTA), the annual sports injury rate in the U.S. was around 8.7 million in 2018. This factor is anticipated to drive the demand, aiding market growth over the forecast period. An alarming rise in the frequency of road accidents is one of the leading causes of increased cases of amputation.

According to the Association for Safe International Road Travel (ASIRT), around 20-50 million people across the globe were injured or disabled owing to road accidents in 2018. Road traffic accidents are the 9th leading cause of death worldwide. In 2018, the ASIRT also reported that in the U.S., over 38,000 people die in road accidents every year. As per the Ministry of Road Transport and Highways, Government of India, in 2018, around 4, 67,044 people were injured in road accidents, which is further fueling the demand for prosthetics & orthotics.

Increasing incidences of osteosarcoma are also boosting the demand for prosthetics & orthotics products. A report published by the National Cancer Institute estimated around 3,450 new cases of bone and joint cancer in 2018, resulting in 1,590 deaths globally. Children with Cancer U.K., a member of the Association of Medical Research Charities (AMRC), reported that osteosarcoma is the most common bone tumor in children, and every year around 30 new children are diagnosed with the disease in the country.

Technological advancement in orthotics & prosthetics is expected to boost the market growth in the near future. For example, 3D printed prosthetics by LimbForge is expected to gain market penetration in the developing regions due to their cost-effectiveness and ease of usage. In September 2018, Ottobock launched C-brace with swing phase control to increase its market visibility in the orthotics space.

The orthotics type segment held the dominant share of over 74% in the global market, in terms of revenue, in 2020. This may be attributed to the increased prevalence of osteoarthritis, incidences of sports injuries, and penetration of orthopedic technology. Upper limb orthotics accounted for the largest share owing to various benefits, such as reduced pain and rapid recovery, in terms of movement. Spinal orthotics is expected to exhibit the fastest growth rate from 2021 to 2028 owing to the factors, such as the increasing number of spinal injuries, rising target population, and unhealthy lifestyles. On the basis of type, the market is segmented into orthotics and prosthetics. The orthotics segment is further segmented into lower limb, upper limb, and spinal orthotics. 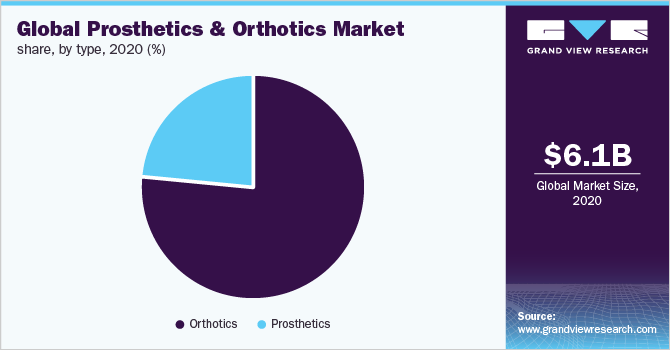 Prosthetics, on the other hand, comprises upper extremity and lower extremity prosthetics, liners, sockets, and modular components. The prosthetics segment is expected to show significant growth over the forecast period. Major companies manufacturing this product are Ossur and Blatchford Inc. An increase in disability rate across the globe is expected to drive the growth of this segment in the coming years. For instance, as per a report published by the Rehabilitation Research and Training Center on Disability Statistics and Demographics, in 2018, the percentage of people with disabilities in the U.S. increased from around 11.9% in 2010 to 12.9% in 2017, thereby resulting in a rising demand for prosthetics.

North America led the global market with a revenue share of over 37% in 2020 and is anticipated to witness the same trend over the forecast period. This growth can be attributed to the presence of well-established healthcare infrastructure, increasing R&D investments by companies, and favorable reimbursement policies in the region.Moreover, the rising prevalence of osteosarcoma and increasing incidences of sports injuries are expected to drive the market growth. The focus of the U.S. healthcare system on quality of care and value-based services has led to a favorable market environment for prosthetics and orthotics.

Asia Pacific market is expected to be the fastest-growing regional market over the forecast period. The regional market is driven by a rise in the number of road accidents, increasing cases of diabetes-related amputations, and supportive government initiatives. For instance, Asian Prosthetic and Orthotics Meeting took place in November 2018 in Thailand for fostering cooperation between Asian countries and discussing the ongoing and emerging issues related to prosthetics and orthotics. As per a report by Asian Diabetes Prevention Initiative, 60% of the population in the region is diabetic.

There are several global and local players in this market. These companies have implemented strategic initiatives, such as mergers, acquisitions, collaborations, and new product launches, to gain higher market share. For instance, in September 2017, Ottobock launched pediatric prosthetic knee joints.In May 2018, Ossur introduced products, such as Ossur Formfit Pro Line of 3D knitted supports at OTWorld, to gain more market penetration. In July 2018, Blatchford launched a new sandal toe foot shell for its various products, such as Linx, Elan, and Echelon VAC, to improve its product portfolio. Some of the key players in the global prosthetics and orthotics market are:

This report forecasts revenue growth at global, regional, and country levels and provides an analysis of the latest industry trends in each of the sub-segments from 2016 to 2028. For the purpose of this study, Grand View Research has segmented the global prosthetics and orthotics market report on the basis of type and region:

How big is the prosthetics and orthotics market?

What is the prosthetics and orthotics market growth?

Which segment accounted for the largest prosthetics and orthotics market share?

b. North America dominated the prosthetics & orthotics market with a share of 37.73% in 2019. This is attributable to well-established healthcare infrastructure, increasing R&D investments by companies, and favorable reimbursement policies.

Who are the key players in the prosthetics and orthotics market?

What are the factors driving the prosthetics and orthotics market?

b. Key factors that are driving the prosthetics & orthotics market growth include the increasing incidence of sports injuries and road accidents, the rising number of diabetes-related amputations, and the growing prevalence of osteosarcoma around the world.