"Increasing significance of renewable energy to drive the industry growth"

The global protective relay market size was valued at USD 2,590.1 million in 2015 and is estimated to exhibit a significant growth at a CAGR of over 5.0% over the forecast period. 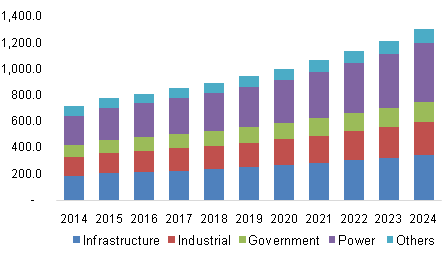 This growth may be accredited to the upsurge in power & infrastructure projects in Asia Pacific coupled with rising investments in the T&D networks across the globe.

In 2015, Asia Pacific held the highest share contributing close to 30% of the entire revenue in the same year. Increasing funding in the renewable sector paired with the modernization of grid infrastructure are the key factors expected to fuel protective relay demand over the near future.

Mounting infrastructural development in China & India owing to the rising economic progress in these countries is further projected to spur the protective relay market demand over the forecast period. Moreover, events such as the Summer Olympics 2020 in Japan will ensue in infrastructural development subsequently impelling the protective relay market growth.

The power sector is foreseen to remain as the largest & fastest-growing end-use segment and is estimated to grow at a CAGR of over 5.0% from 2016 to 2024. The industrial development paired with the upsurge in power production capacity across the globe is projected to augment the protective relay. The growing population together with the increasing per capita electricity consumption in Asia Pacific are some important factors backing the demand over the next eight years.

"Medium voltage accounted for the highest market share in 2015"

The medium voltage segment accounted for over 40% of the global market share in 2015. The high share is accredited to an increase in the application of medium voltage protective relays in power systems and substations. The growing population in China, India, Japan, Saudi Arabia, and UAE has ensued in noteworthy rate of population relocation, subsequently spurring the demand for residential infrastructure and electricity consumption. Thus, the escalating demand for electricity in these nations is projected to fuel market growth over the next eight years.

The feeder protection segment contributed to over 20% of the whole revenue share in 2015. The excessive need for protective relays to protect power transmission lines is foreseen to fuel the market growth over the forecast period.

The likelihood of fault incidence in the transmission lines is greater than the other counterparts as these lines are generally lengthy enough and operate in an open environment. Thus, the cables & lines making the feeder system need concentrated protection else they can cause damage to the atmosphere.

The global protective relay industry is highly competitive and consolidated with a few major players accounting for over 60% of the global revenue share. Crucial players such as ABB, GE-Alstom, Siemens, & Schneider hold a strong position in this arena making it difficult for the novel players to enter. Product diversification & innovation is a key strategy adopted by these players to remain competitive in the industry.