The global Rail Mounted Gantry crane market size was estimated at USD 286.1 million in 2016 and is expected to gain traction over the forecast period. The increasing global trade and container traffic are the primary factors that are responsible for driving the growth of market. Furthermore, the increasing transshipment in regions such as Asia Pacific and the Middle East & Africa are likely to support the market growth.

RMG cranes are utilized in handling shipping containers in container yards. Unlike other container handling cranes, RMG possesses steel wheels instead of conventional rubber tires. As a result, they are capable of enduring heavy weight containers. 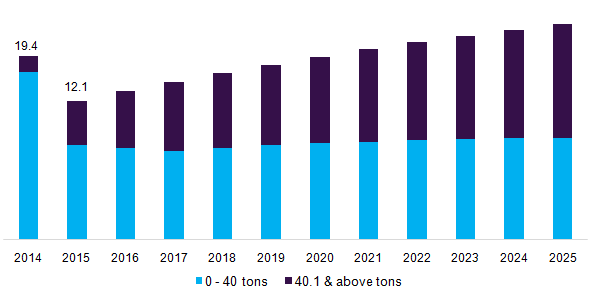 The heavy weight bearing capability of RMG cranes offers greater flexibility to crane manufacturers while designing them. They are capable of accommodating a variety of rail configurations, thus allowing a single RMG to offer an intermodal facility. Furthermore, they can cover a large area and span to 300 feet or more, stretching across rail tracks along with stacking areas.

These cranes are environment friendly as they can run entirely on electricity. With the growing strictness of government regulations around pollution control, the demand for RMG cranes will gain traction in the coming years. Furthermore, the integration of smart features in RMG cranes has helped in achieving lesser operational hazards and higher efficiency. Some of these intelligent features include container positioning system, non-contact anti-collision system, and remote operation, among others.

Many governments are observed making heavy investments to enhance and expand their existing port facilities. This can be attributed to the growing trade activities, especially between developing economies such as India, UAE, Saudi Arabia, and Mexico, among others.

With the increase in vessel size, container traffic is expected to grow significantly, which would require port equipment to facilitate faster movement of containers. Increase in trade activities is compelling the growth of container throughput peaks, which in return is pressurizing the port authorities to improve the port infrastructure. Taking into account the cost efficiency and competitive advantages offered by bigger vessels, this trend is likely to continue over the years. Therefore, ports will be required to expand their capabilities in order to cater bigger vessels and improve their existing container handling capabilities. As a result, there will be an increasing demand for cranes with high load lifting capabilities as they facilitate easy, stable movement.

Europe occupied a significant share in the global rail mounted gantry crane market and is expected to grow at a CAGR of over 3.0% over the forecast period. Whereas Asia Pacific is presumed to emerge as the fastest-growing region with a CAGR of over 4.3% from 2017 to 2025. 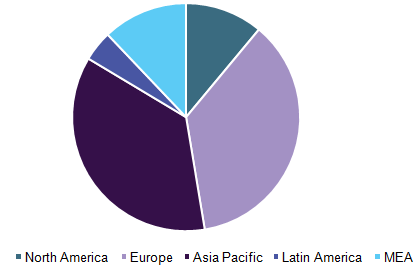 The growth in Asia Pacific region is characterized by the presence of rapidly growing economies and the concentration of key market participants such as Shanghai Zhenhua Heavy Industries Co., Ltd., Doosan Heavy Industries Vietnam Co., SANY Group, and Anupam Industries Limited, among others. Moreover, the growing intra-Asia trading activities, rising transshipment volumes, and increasing port investments are driving growth of the market in this region.

East Asian ports, precisely Shanghai (China), Busan (South Korea), and Kaohsiung (Taiwan), among others, are observed making investments in expanding their infrastructure with a focus on catering the transshipment business. Moreover, this region comprises some of the world’s busiest ports, which is evident from the presence of 24 out of 50 world’s biggest ports in the region. Moreover, many expansion projects have been undertaken in the region. For instance, Southeast Asia currently has the maximum number of ongoing port development projects with about five projects based on strategic Malacca Strait shores. Moreover, there has been an increase in intra-Asia trade activities, which can be attributed to the presence of developing economies in this region.

Industry players are actively participating in research & development activities to enhance and expand their existing product portfolios. For instance, in 2015, Liebherr was observed spending approximately USD 600 million on research & development, which was majorly utilized for product development. Similarly, Konecranes Plc has been observed investing in its research & development capabilities, focusing on developing products with smarter cabin for cranes. Moreover, partnerships and mergers & acquisitions are also a major trend observed in the market. For instance, in 2016, Konecranes Plc acquired Terex’s Material Handling & Port Solutions (MHPS) business in order to expand and gain dominance in the RMG crane manufacturers market.

This report forecasts revenue growth at global, regional, and country levels and provides an analysis of industry trends in each of the sub-segments from 2014 to 2025. For the purpose of this study, Grand View Research has segmented the global Rail Mounted Gantry crane market on the basis of lift capacity and region: