The global railroads market size was valued at USD 295.80 billion in 2021 and is expected to expand at a compound annual growth rate (CAGR) of 4.4% from 2022 to 2030. The market is likely to be driven by continued investments in railway line projects and the expansion of railroad networks around the world. Several national and international railway projects, particularly in the Asia Pacific, are currently in the planning, development, or building stages, which bodes well for future market growth. 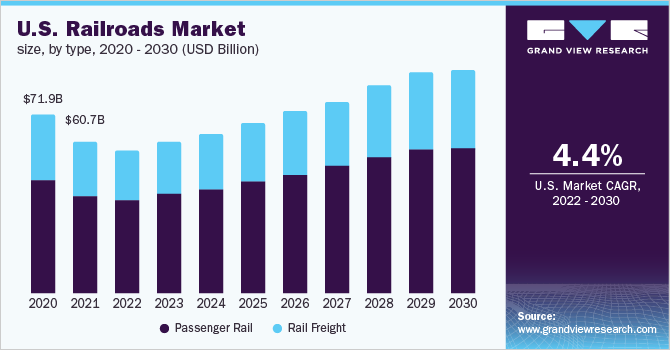 The impact of the COVID-19 pandemic on the rail freight business has been mixed. North and South America saw a fall in rail freight traffic while Asia witnessed an increase. In April 2020, SNCF—France’s national state-owned railroad company—announced modifications to its operations in response to the low passenger and freight demand. It decreased TGV and Intercités services to about 10% of normal levels, while Transilien and TER services, as well as Keolis-operated transport networks, were lowered to an average of 15% to 20% of normal capacity. SNCF’s rail freight service was running at 65% of its normal capacity.

In many countries, COVID-19 led to a scarcity of truck drivers, as well as restrictions on sea and air transportation, which resulted in a dramatic increase in the cost of transportation by truck, sea, or air. The cost of rail freight, in comparison, was low, and switching to rail freight became a supply chain advantage. Over the forecast period, more investments, infrastructure expansions, and technology implementation to digitize rail freight are expected, translating to increased market growth.

The passenger rail segment led the market with a share of 58.7% of the global revenue in 2021. The segment is projected to witness growth over the coming years as the tourism industry picks up speed thanks to inexpensive passenger train fares. Furthermore, increased investments in the expansion of passenger railroad networks and the introduction of newer and faster trains, like bullet trains and metros, are likely to propel segment growth. The passenger rail segment is also expected to register the fastest growth in the forecast period.

The rail freight segment has been witnessing steady growth owing to the growing reliance on railroad routes for the transportation of goods and lower rail freight rates. Furthermore, the railroad network's strong connection facilitates the transportation of commodities in remote places that are otherwise impossible to reach by air. Even though global trade and cargo volumes were affected by the pandemic, the market is expected to recover over the projection period as freight and shipping volumes return to pre-pandemic levels.

The agriculture segment held the largest share of 34.2% in the railroad market in terms of revenue in 2021. Stable and efficient railroad service is especially crucial for the agriculture industry. Rail transportation is essentially the only cost-effective shipping option available for low-value, bulk commodities in rural areas far from sea transit and end markets. These factors have driven the agriculture railroad segment in the past. In India, the robust Indian railway network connects small farmers from the remotest parts of the country to the mainstream market, where they can sell their agricultural produce. 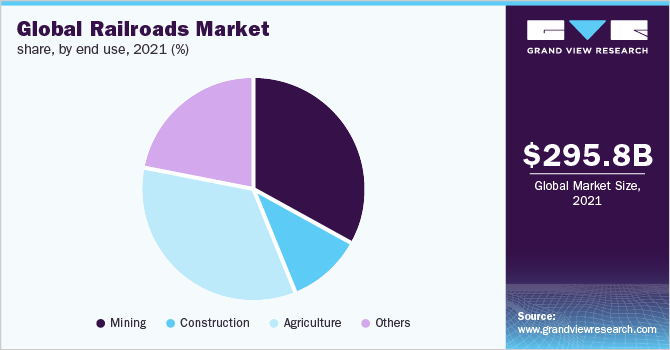 The mining segment is expected to register the fastest CAGR over the forecast period to overtake the agriculture segment in terms of market size by 2030. Monorail systems are being increasingly employed in coal and ore mines because of their efficiency and cheap running costs. Monorail systems are quickly becoming essential components in all mining projects where transportation systems have been optimized and where road and rail transportation can be combined. Looking to capitalize on the opportunities in freight transportation, the Indian Railways has been mapping mining districts across the country to connect them with the railroad network.

North America held the largest market share of just over 30% in 2021 and is expected to retain its lead throughout the forecast period. Freight rail is a pillar of the American economy, according to the Association of American Railroads, and the U.S. is home to a world-class freight rail network. The growth of freight rail in the country can be linked to continued investments in the enhancement of equipment, infrastructure, and technology. Passenger railroad services in the region are driven by rising consumer demand, increased passenger safety measures, and technological as well as operational advancements.

Asia Pacific is expected to register the fastest CAGR from 2022 to 2030 due to increased government investments in new railroad construction and the high reliance of the population on rail transport. For example, Timetric's Construction Intelligence Center (CIC) shows that the Asia Pacific leads the world in railroad investment. It is also the world's largest transport infrastructure market, with PwC forecasting annual spending of about USD 900 billion by 2025. Apart from this, increased imports and exports from Asian countries are predicted to boost market growth.

The market includes both international and domestic participants who focus on strategies such as innovation, mergers and acquisitions, and investments in technology, infrastructure, and expansions to enhance their position in the market.

Some prominent players in the global railroads market include:

This report forecasts revenue growth at global, regional, and country levels and provides an analysis of the latest industry trends and opportunities in each of the sub-segments from 2017 to 2030. For this study, Grand View Research has segmented the global railroads market report based on type, end use, and region:

How big is the railroads market?

What is the railroads market growth?

Which segment accounted for the largest railroads market share?

b. North America dominated the railroads market with a share of 30.08% in 2021. This is attributable to the presence of the largest rail networks with more than 28,000 locomotives and 1.5 million railcars in the U.S.

Who are the key players in the railroads market?

What are the factors driving the railroads market?

b. Key factors that are driving the railroads market growth include increasing investments by the governments in the various countries to improve the railway infrastructure & build new lines and the growing tourism industry in Asia Pacific and European countries.

The home care & decor industry has been witnessing inconsistent growth, since the COVID-19 outbreak. As a result of the ongoing pandemic crisis, there has been a drop in the overall performance of discretionary products such as decorative fixtures, bedding products, to name a few. The virus outbreak has, however, led to substantial growth in categories such as cleaning and hygiene products. Prominent growth in the e-commerce business is also one of the positive influences of the outbreak, wherein companies are focusing on expanding their distribution networks to online channels in order to cater to the surging consumer demand. Our team is diligently working towards accounting these factors in our report with the aim of providing you with the up-to-date, actionable market information and projections.