The global rare disease genetic testing market size was valued at USD 812.3 million in 2019 and is projected to register a Compound Annual Growth Rate (CAGR) of 10.9% from 2020 to 2027. Misdiagnosis can result in interventions that could later be considered inappropriate for the underlying disorder. Thus, the need for an accurate and timely diagnosis for rare conditions drives the demand for genetic testing. Currently, the lack of awareness pertaining to these conditions is one of the primary challenges for the market. Thus, several efforts are being undertaken to help raise awareness about various aspects of rare and ultra-rare diseases, such as the challenges pertaining to diagnosis and clinical implementation of available diagnostic approaches. 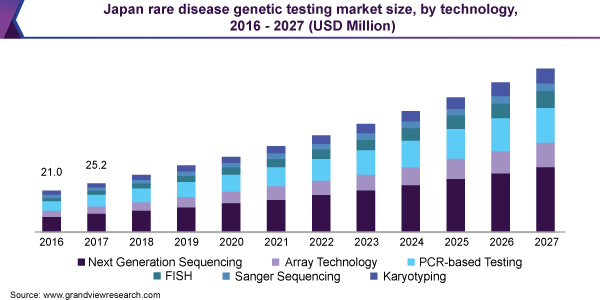 Companies like Shire Plc are engaged in supporting domestic diagnostic testing for rare disorders in certain countries and offer learning programs for healthcare experts on genetic testing. Every country has developed its registry for rare diseases that acts as a focal point of information on these conditions. Patient registries and databases play a vital role in clinical research in the field of rare diseases and help in improving healthcare planning and patient care.

A rise in the number of available registries is one of the major driving factors of the market as it enables pool data to achieve a sufficient sample size for epidemiological and/or clinical research. Furthermore, technological advancements in data collection and interpretation for clinical practice has driven the market. Companies are making efforts to ensure efficient data collection from various ethnicities, which is expected to aid in the diagnosis of thousands of patients with the same condition.

In addition, companies, such as Centogene, combine genetic testing with metabolomics and proteomics to make their data analysis process as accurate as possible. The multi-omics approach helps better understand the impact of a given mutation on the protein as well as at the metabolite level. The company has also introduced a system to simplify the sample collection process, thereby driving the adoption of genetic tests for rare disease diagnosis.

Neurological disorders segment accounted for the largest share of 12.9% in 2019. A substantial number of commercially-approved genetic tests for neurologic conditions coupled with a high prevalence of neurological diseases has accelerated the revenue growth in this segment. Tests offered by companies are recommended by several medical institutes, such as the American Academy of Neurology, American College of Medical Genetics, and Child Neurology Society.

Moreover, immunologic disorders, such as Multiple Sclerosis (MS), are among the most prevalent rare diseases. The genetic profile of MS is one of the key focus areas among researchers in this field. This is primarily to obtain relevant insights pertaining to the causes and underlying physiology of diseases, resulting in a significant share of this segment.

Research laboratories & CROs captured the maximum share of 46.9% of the market in 2019. This is primarily because in a substantial number of cases, blood samples collected from patients are sent to a laboratory for testing. Laboratories offer testing based on various specialties, including molecular, chromosomal, and biochemical genetic tests. For instance, ARUP Laboratories offers testing in molecular genetics, cytogenetics, genomic microarray, and biochemical genetics.

Laboratories also offer genetic counseling services that further accelerate the uptake of services among patients. Moreover, molecular genetic testing-based laboratory testing is rapidly increasing worldwide. Genetic tests are conducted by multiple laboratories, including those that are accredited with CLIA for clinical cytogenetics, pathology, and chemistry, among other specialties. These companies are involved in expanding their test portfolio by undertaking various strategic initiatives. 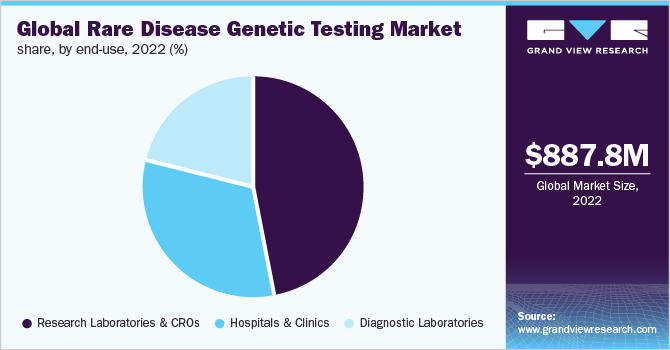 For instance, in January 2020, Quest Diagnostics acquired Blueprint Genetics to enhance its expertise in genetic disorders and rare diseases. Furthermore, in June 2018, Centogene launched its diagnostic laboratory in Cambridge, Massachusetts. Such initiatives depict the growing interest of diagnostic centers in genetic testing of rare diseases, which is likely to boost segment growth.

Next Generation Sequencing (NGS) accounted for the largest share of 36.6% in 2019 owing to the high usage of Whole Exome Sequencing (WES). WES is being considered a highly potential method in a case where the genetic cause of disease is unknown and is difficult to identify. WES is becoming the standard of care for patients with undiagnosed rare diseases. This is attributed to the fact that exons make up around 1.5% of an individual’s genome and contain 85% of all known disease-causing mutations.

Moreover, with the declining costs of WES, the cost of genetic testing is also anticipated to reduce significantly, making the test more affordable and accessible. In addition, medical coverage for WES-based genetic tests has favored segment growth. A substantial number of private health insurance agencies cover all or part of the cost of genetic testing, post recommendation by a healthcare professional. As compared to WES, clinical Whole Genome Sequencing (WGS) has lesser demand.

However, with a continuous decrease in cost, adoption of WGS is expected to amplify. For instance, the Rady Children’s Institute for Genomic Medicine offers singleton-rapid WGS and a trio-rapid WGS at a reasonable cost. In February 2020, Dante Labs launched an initiative to offer WGS to patients with rare diseases for USD 299. The service included WGS 30X on Novaseq6000 technology, data interpretation, and personalized therapy on these diseases.

Accounting for more than 40% revenue share, molecular genetic tests led the market in 2019. Rapid technological advancements and expertise in handling & managing high throughput technologies within clinical settings have driven the revenue in this segment. Molecular genetic test methods enable investigating single genes or short lengths of DNA for the detection of mutations or variations leading to genetic disorders.

Apart from rare diseases, the method also covers testing of ultra-rare diseases, which will augment the segment growth in future. Biochemical genetic tests are expected to register the second-fastest CAGR during the forecast period owing to their efficiency to assess the activity and amount of proteins & related abnormalities for the identification of changes in the DNA that can cause a metabolic disorder.

Also, the companies are expanding their test portfolio to capitalize on the potential opportunities present in this segment. In September 2019, Blueprint Genetics collaborated with ARCHIMEDlife to launch high-quality biochemical tests for rare diseases. Such developments are anticipated to boost the revenue share of the segment in the coming years.

North America accounted for the largest market share of over 47% in 2019. Factors, such as high incidence of rare disorders, a large number of rare disorders registries, and the presence of substantial numbers of R&D facilities for rare & ultra-rare diseases, and extensive investments in the diagnosis of rare disorders in the region drives the market growth. As per the National Institutes of Health (NIH), around 30 million Americans have been identified with one of 7,000+ known rare diseases. Moreover, the number of patients undergoing disease testing is expected to increase in the coming years, thereby supporting market growth.

Asia Pacific is expected to register the fastest CAGR from 2020 to 2027 due to rising awareness and target population in Asian countries. China is attempting to shift the attention of the healthcare system towards the diagnosis and treatment of rare disorders. The government in the country has included rare disease management as a public health priority in its 2030 roadmap titled—Healthy China 2030. Furthermore, in June 2018, the country released its first list of rare disorders to enable the patients to find solutions effectively at their local hospitals.

The development of technologies, such as WES & WGS, has significantly transformed genetic testing space by offering convenient and cost-effective methods that can be conducted for a wide range of conditions across multiple clinical settings. As a result, major diagnostic companies are engaged in expanding their product portfolio that can be used to conduct tests for rare and ultra-rare conditions.

The companies have signed an agreement in March 2020; however, it is targeted to be completed by the first quarter of 2021, as ThermoFisher Scientific is lining up finances for the USD 11.5 billion deal, with an offering worth $2.2 billion. This deal is expected to impact the life science tools and reagents market significantly. With regard to rare disorder genetic testing, Thermo Fisher Scientific is engaged in research and provides sequencing for the Osteogenesis imperfecta and Vascular Ehlers-Danlos syndrome. Some of the prominent players in the rare disease genetic testing market include:

This report forecasts revenue growth at global, regional, and country levels and provides an analysis of the latest industry trends in each of the sub segments from 2016 to 2027. For the purpose of this study, Grand View Research has segmented the global rare disease genetic testing market report on the basis of disease type, technology, specialty, end use, and region:

How big is the rare disease genetic testing market?

b. The global rare disease genetic testing market size was estimated at USD 0.81 billion in 2019 and is expected to reach USD 0.92 billion in 2020.

What is the rare disease genetic testing market growth?

Who are the key players in rare disease genetic testing market?

What are the factors driving the rare disease genetic testing market?