The global robotic biopsy devices market size was valued at USD 302.5 million in 2018 and is anticipated to grow at a significant rate over the forecast period. Key factors accrediting to this growth are rising incidence of cancer and growing penetration of robotic systems for the diagnosis of this disease. Cancer cases are growing at a rapid rate globally. According to the Cancer Research UK, there were around 17 million new cancer cases in 2018. The most common cancer cases reported were for lung, breast, bowel, and prostate, which accounts for a total of 43% of all new cases. Moreover, it has been forecast that there will be nearly 27.5 million new cases each year by 2040.

Biopsy is one of the primary and major tests for determining the cancer stage. Image-guided tests can only detect abnormal mass growth but fail to differentiate whether the mass is cancerous or not. It can be accurately detected only by undergoing biopsy. Hence, as the global burden of cancer is increasing, the demand for these procedures to diagnose cancer is also increasing. This, in turn, is creating opportunities for robotic biopsy devices. 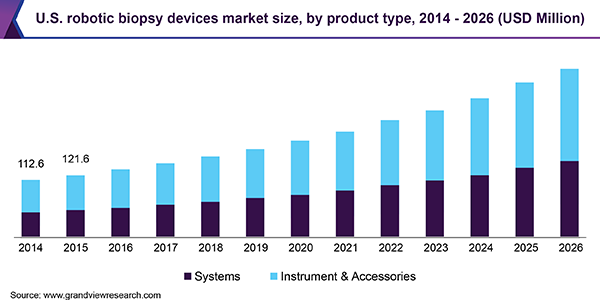 Moreover, the growing demand for minimally invasive procedures among patients and providers is driving the growth of the market. For instance, traditional methods of performing a prostate biopsy involve greater complications and longer hospital stays. However, by opting for robotic assisted devices, specialists can obtain targeted area samples from any part of the prostate gland with high precision and without disturbing the surrounding nerve.

The robotic approach for performing a biopsy even provides greater details on the location of the lesion. This reduces the risk of puncture damage to nearby tissues or organs. Moreover, the robot-assisted procedure requires only 2 to 3 skin punctures, regardless of the number of mass samples needed for diagnosis. There is also a minimum risk of infection involved due to less invasion and eventually leads to improved recovery for patients. This, in turn, has increased the adoption of robotic procedures over traditional approaches.

However, the lack of availability of medical professionals in developing countries, along with high setup costs required for these robotic systems may hinder market growth. Low-income countries cannot afford these expensive devices as their healthcare expenditure is lesser than the average global healthcare expenditure. Surgeries in these countries are still performed using manual instruments due to low reimbursement rates. Therefore, many cancer cases are left undiagnosed, resulting in a high cancer mortality rate in these countries.

However, the systems segment is anticipated to grow at the fastest rate during the forecast period. Rising number of medical device and robotics companies engaged in R&D and commercialization of medical robots is the primary factor influencing demand for robot assisted biopsy devices. These companies foresee it as a lucrative business, owing to on-going automation in healthcare and demand for minimum invasive surgeries among patients. For instance, XACT Robotics developed the XACT Robotics System, a robotic platform that performs image-guided percutaneous procedures. The product is projected to be launched by 2019 in the U.S. Many robotic devices such as Monarch Platform and Ion Endoluminal System will also be launched in the market soon.

The global robotic biopsy devices market, based on application, is classified into the lung, brain, prostate, and other biopsies. In 2018, lung biopsy dominated the market and is anticipated to exhibit the highest CAGR of 12.3% over the forecast period. Increasing incidence of lung cancer is a primary factor encouraging market growth. According to the American Institute for Cancer Research, approximately 2 million new cases were reported globally in 2018. Smoking is the cause of nearly 90% of the cases. Non-smokers exposed to second-hand tobacco smoke and radon gas or air pollution have also reported lung cancer. 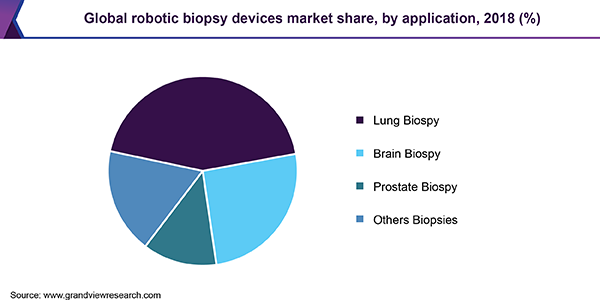 Many suspicious lesions found in the lungs may be minor and difficult to access, which makes obtaining the sample challenging. Robot-assisted devices address this challenge by enabling surgeons to obtain tissue samples from deep within the lung with greater accuracy. Furthermore, a decrease in procedure time has ultimately led to lesser anesthetized time for patients, which eventually leads to reduced hospital costs. These advantages of robotic devices over manual procedures is further expected to drive the demand for robot-assisted biopsy devices.

Based on geography, the market for robotic biopsy devices is segmented into North America, Europe, Asia Pacific, Latin America, and MEA. North America dominated the market in 2018, with a revenue of USD 175.7 million. Presence of major key players in the region, well-established healthcare infrastructure, and on-going investments on biopsy robots are some of the key factors contributing to the large share of North America.

Medical device companies in this region are continuously working on the inclusion of robotics and other technological platforms in healthcare settings for the diagnosis of cancer. For instance, in 2019, U.S. based Intuitive Surgical introduced a robotic platform Ion for minimally invasive peripheral lung biopsies. The device has been commercialized for sale in the U.S.

Moreover, California-based company Auris Health developed a flexible robotic endoscopic system named Monarch Platform. This system aims to detect lung nodules. The product has been launched only in the U.S. The commercialization of majority of robotic devices in the U.S. has also made the region a leader in robot assisted biopsy devices.

This report forecasts revenue growth at global, regional, and country levels and provides an analysis on latest industry trends in each of the sub-segments from 2014 to 2026. For the purpose of this study, GVR has segmented the global robotic biopsy devices market report on the basis of product type, application, and region: